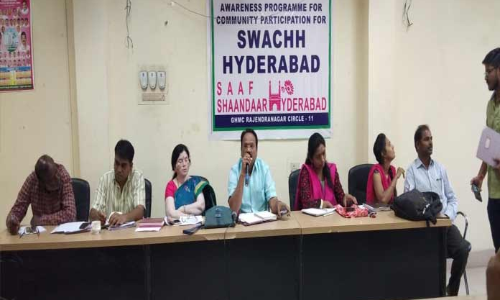 Not just slapping notices to residents against throwing garbage in an unorganized manner and throwing trash in open, the GHMC Rajendranagar is also gearing up to levy penalties on the errant people and organisations

Rajendranagar: Not just slapping notices to residents against throwing garbage in an unorganized manner and throwing trash in open, the GHMC Rajendranagar is also gearing up to levy penalties on the errant people and organisations.

A brain-storming session was held on Thursday with the representatives of NGOs, residential welfare associations, ward committee members, area sabha members, sanitary officials and common resource persons to discuss and gather their suggestions to come up with a comprehensive action plan before taking steps against the offenders.

With a view to deciding the future course of action, the officials during the meeting elicited views on ways to curb menace of piling up of garbage in residential areas, dispensing of trash without segregation and throwing it in open plots in the colonies.

The two-and-a-half hour meeting witnessed a lengthy blame game between the public representatives and the sanitary officials. While the public representatives and the welfare associations expressed their view that the sanitary staff, especially the garbage collection teams, were not carrying out door-to-door collection regularly, the officials said that residents were not doing their bit as per the rules laid down by the GHMC with regard to dispensation of trash in an orderly manner. In some areas, the sanitary supervisors said, the residents were not handing over the trash to the collection teams, and were simply disposing of the same in open places even though they were warned many times.

Moreover, handing over garbage without proper segregation became a common trend everywhere, making it difficult for the sanitary teams to do it by themselves after collecting the same in huge quantities, the officials bemoaned.

After the marathon discussion, the meeting decided to constitute multi-tasked committees at ward levels to look over garbage collection, dispense off trash, check on piling of waste in the colonies, warn people against throwing off disposals in open and to issue challans if found someone guilty of polluting the hygienic atmosphere.

However, local residents expressed a different view over the performance of sanitary staff in their areas. “Only once in fifteen days the sweeper appears to clean the streets. Many lanes, where the garbage collection is not properly maintained, need a regular brush. The sanitary wastes, removed from the sewer ditches, are left on the surface for months, causing extensive stinking in the air. The sanitary officials, especially supervisors, rarely respond to any call with regard to sanitary issues,” said Mohammed Jahangir an Area Sabha Member of Hasan Nagar.