The crafty crane and the craftier crab 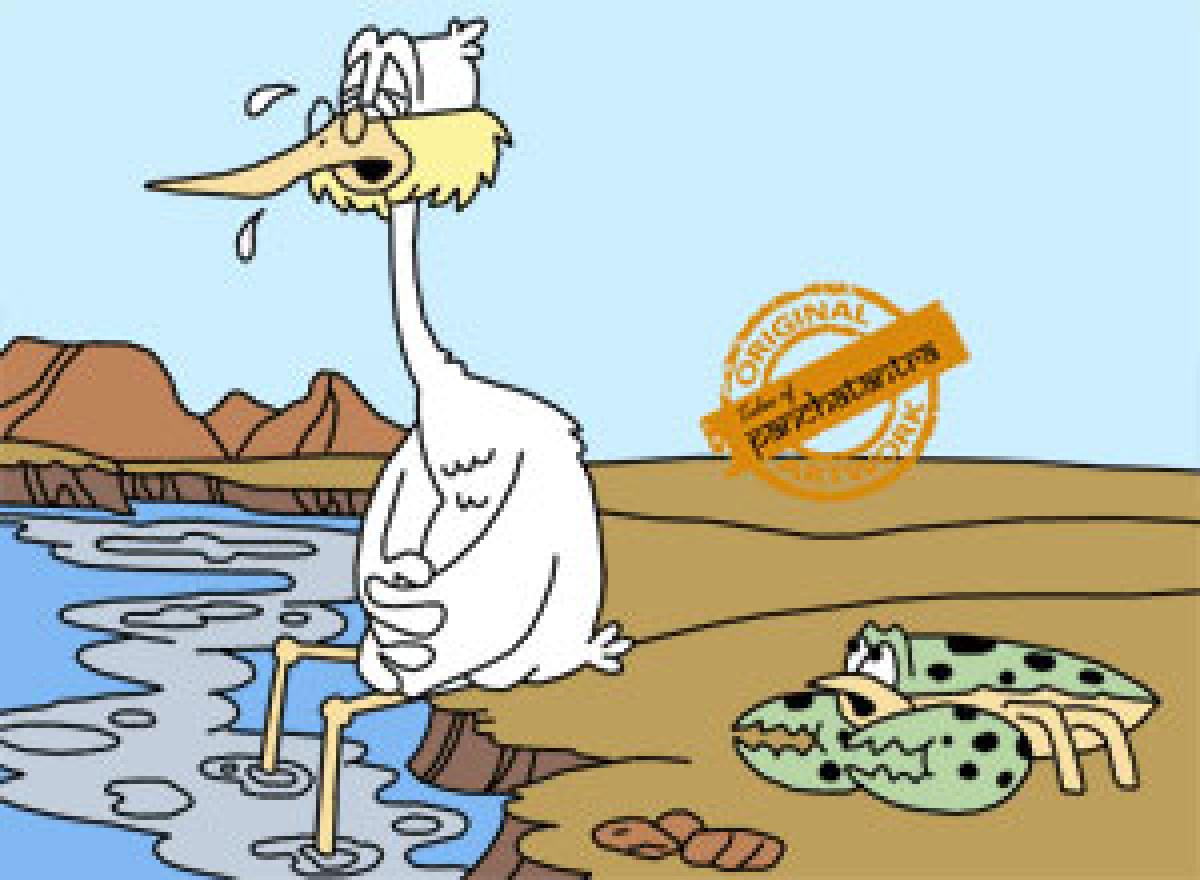 A heron lived near a big lake, which was full of fishes and other water creatures. The heron had grown so old, that he could not catch fishes from the ... A heron lived near a big lake, which was full of fishes and other water creatures. The heron had grown so old, that he could not catch fishes from the lake anymore.

He became lean and weak with every passing day due to lack of food. Unable to bear the hunger anymore, he hit upon a plan.

As planned, he sat at the edge of the lake for everybody to see, and began crying. On seeing this, a crab took pity on him and went near, "Uncle, What is the matter? Why are you crying instead to catching fishes?"

Continuing to pretend, the heron replied, "My child, I would not touch any fish anymore. I have decided to renounce all worldly matters, and vowed to undertake a fast unto death".

The crab asked, "If you have indeed renounced worldly matters, why is it that you cry?" The heron explained, "My child, I have been in this lake from my birth. I have grown here. And it now that I have grown so old that I hear that this lake will dry up as there will be no rains for the next twelve years".

The crab was surprised to hear this, "Uncle, please tell me if it is true. Please tell me where you have heard such thing."

The heron replied, "I have heard the news from a wise astrologer that there will be no rains for the next twelve years. You see, there is already not much water in the lake. And very soon, due to lack of rains, the lake will dry up completely very soon."

The crab was taken aback by the news of what is to befall on them, and went to tell this to the other water creatures. On hearing this piece of news, everybody started to panic.

They believed the heron, as he was not trying to catch any fish at all. So, they met the heron to seek advice, "Please guide us to save us from this disaster" The heron said, "There is indeed a lake not far from here.

It is full of water, and beautifully covered with lotus flowers. There is so much water in the lake that it would not dry even if it did not rain for twenty four years. I can take you there, if you can ride on my back."

He had already gained their confidence. So, they gathered around him and requested to carry them one at a time to the other lake and save them.

The wicked heron had succeeded in his plan. Every day, he would carry on of them on his back pretending to take them to the other lake.

After flying a little away from the lake, he would smash them against a rock and eat them up. He would then return after some time to the lake and relate false messages how they are happy in the other lake.

This happened for many days, when the crab said to the heron, "Uncle, you take others to the lake but it is me who is your first friend. Please take me to the other lake to save my life." The heron was happy to hear this. He thought to himself, "Having a fish everyday has become monotonous. It is good that I will get to eat a crab today, for a change."

Having thus decided, the heron started carrying the crab to the same rock. The crab looked down from above and saw the heap of bones and skeletons. At once, the crab understood what the heron was up to. He remained calm, and said to the heron, "Uncle, the lake seems far and I am quite heavy. You must be getting tired, let us stop for some rest".

The heron was confident that there was no way the crab can escape from him in the sky. The heron replied, "There is no lake for real. This trip is for my own meal. As I do every day, I will smash you against a rock and make a meal out of you."

When the heron confessed the truth, the crab got hold of the heron's neck with its strong claws, and strangled him to death.

The crab laughed at himself that he had saved himself and the other water creatures from the trick played by the heron. He dragged the heron back to the lake.

The other water creatures in the lake were surprised to see him back. They became curious, and asked all sort of questions.

The crab laughed and replied, "We were being made fools! The heron was an imposter and what he told about the lake drying up was all false. He was taking one of us every day for his meal in a rock not far from here." He proudly said, "I understood what he was up to, and have killed the trickster. There is no need to worry, for we are safe in this lake. It is not going to dry up at all."

The wise indeed say: When things go wrong, use your wit to overcome the situation.