The man who beat cancer: The many highs of Yuvi 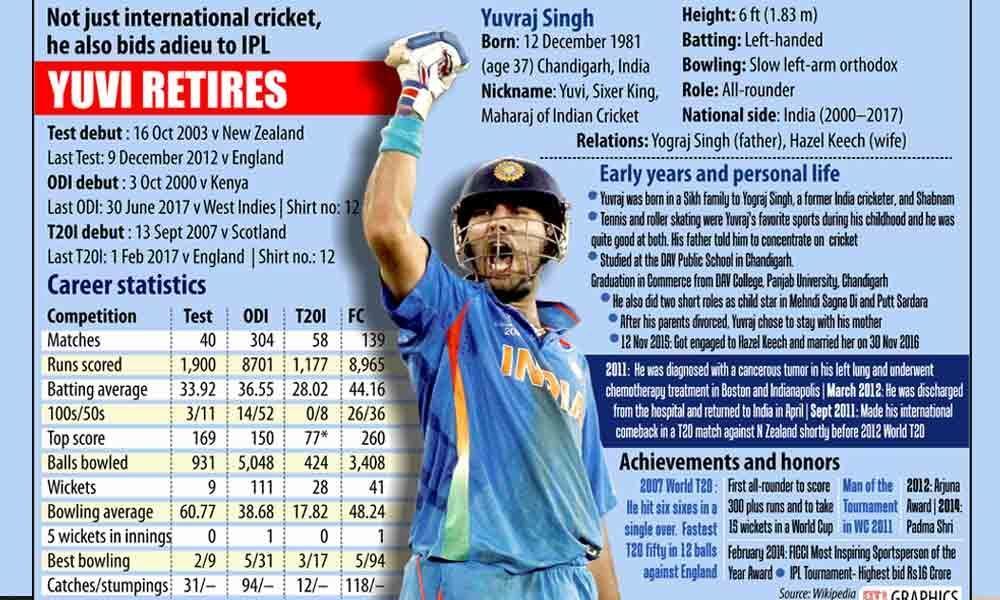 As Yuvraj Singh announces retirement from international cricket, here is a look at the high points of his career during which he also put up a triumphant battle with cancer.

Mumbai (PTI): As Yuvraj Singh announces retirement from international cricket, here is a look at the high points of his career during which he also put up a triumphant battle with cancer.

October 2000: Yuvraj made his international debut for India against Kenya in a One-day International at Nairobi.

October 2000: Yuvraj, playing only his second ODI and his first international innings, scored 84 off 80 balls against Australia in the quarter-final of the ICC Knockout Tournament in a memorable win.

July 2002: Yuvraj made 69 and combined with Mohammad Kaif to give India a thrilling two-wicket win over England while chasing 325 in the NatWest Series final at Lord's.

January 2004: Yuvraj made a then-career high score of 139 off just 122 balls against Australia.

February 2006: Yuvraj emerged as one of India's most valuable and consistent ODI players. In India's 4-1 series win against Pakistan, he scored unbeaten 87 and 79, which helped the team seal the series. He went on to finish the series with another unbeaten knock of 107 off 93 deliveries as India chased down 287 runs.

September 2007: At the inaugural World Twenty20, Yuvraj entered the record books, smashing Stuart Broad for six sixes in an over. He followed it up with a match-winning knock of 70 against Australia in the semi-finals en route India lifting a historic title. He also holds the record of hitting the biggest six -- 119 metres.

December 2007: Although Yuvraj had always struggled to get into India's Test team, he scored a crucial 169 against Pakistan in Bangalore to help the side win a Test series at home.

February 19 - April 2, 2011: It turned out to be a dream World Cup for Yuvraj as well as the Indian team, which lifted the Cup after 28 years. Yuvraj contributed to the team's success with 362 runs in nine matches at a staggering average of 90.50, including a century and four fifties. He won four Man-of-the-Match awards as well as the Player of the Tournament. Yuvraj became the first all-rounder to score 300-plus runs and take 15 wickets in a single World Cup. He was diagnosed with a rare form of cancerous tumour between his lungs soon after but fought back to recover and make a return to the field by the end of the very next year.

January 2017: Yuvraj scored a brilliant 134 off 122 balls in an ODI against England at Cuttack to help India win the match by 15 runs.Mumbai (PTI): As Yuvraj Singh announces retirement from international cricket, here is a look at the high points of his career during which he also put up a triumphant battle with cancer.