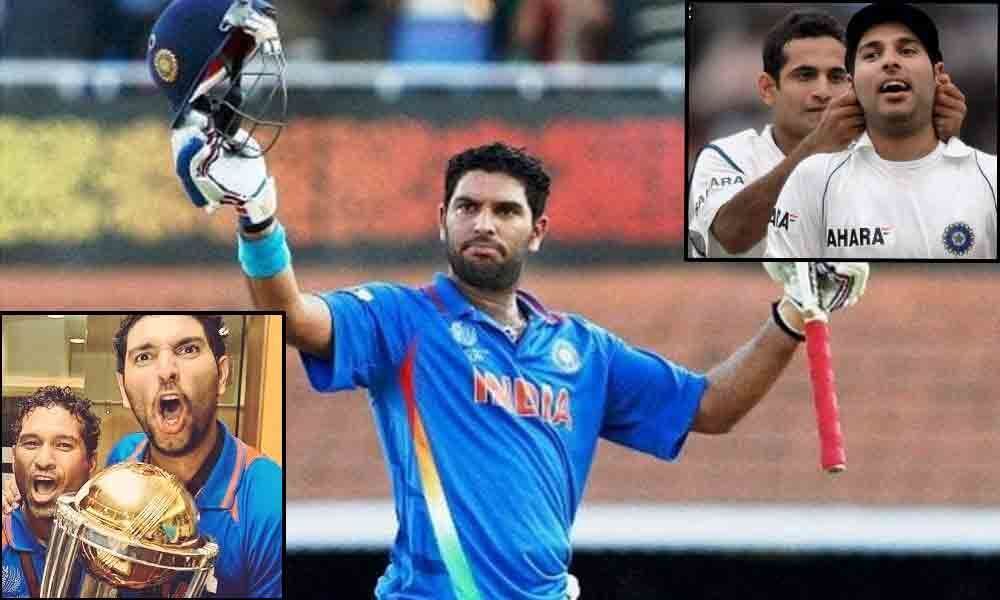 One of India’s most-celebrated cricketers has called it a day on his career. Breaking a million hearts, Yuvraj Singh, on Monday, announced his decision to bid adieu to the game he loves the most.

One of India's most-celebrated cricketers has called it a day on his career. Breaking a million hearts, Yuvraj Singh, on Monday, announced his decision to bid adieu to the game he loves the most. Considered as one of the greatest match-winners produced by India, the 37-year-old last represented the country in an ODI against West Indies at Sir Vivian Richards Stadium, Antigua, in June 2017.

Speaking at a specially arranged press conference in Mumbai, a visibly emotional Yuvraj Singh shared, "I can't really put it in words but I'll try. After 25 years and in around 22 yards and almost 17 years of international cricket, I have decided to move on. Cricket has given me everything I have and is the reason why I stand here today. It was a love-hate relation with the sport in retrospect. I don't think I hated this game because the love I have for it today will remain constant until the end of life. This game taught me how to fight, how to fall, to dust myself off, to get up again and move forward."

"I have failed more times than I have succeeded but I never gave up and will never give up till my last breath and that's what cricket has taught me. I gave my blood and sweat to the game once I got onto it, especially when it came to representing my country," the champion cricketer went on to add in his retirement speech.

'Yuvi', as he's fondly called, essayed numerous glories for India over his career. The stylish left-handed player will especially be remembered for his crucial contributions that helped India lift the World T20 title in 2007 and the World Cup in 2011.

Saluting his contributions to Indian cricket, many fans, fellow cricketers and experts have been flooding Twitter with heartening messages. Here are a few of the tweets:

What a fantastic career you have had Yuvi.
You have come out as a true champ everytime the team needed you. The fight you put up through all the ups & downs on & off the field is just amazing. Best of luck for your 2nd innings & thanks for all that you have done for 🇮🇳 Cricket.🙌 pic.twitter.com/J9YlPs87fv

Players will come and go,but players like @YUVSTRONG12 are very rare to find. Gone through many difficult times but thrashed disease,thrashed bowlers & won hearts. Inspired so many people with his fight & will-power. Wish you the best in life,Yuvi #YuvrajSingh. Best wishes always pic.twitter.com/sUNAoTyNa8

It's been an absolute pleasure playing with Yuvi. You will go down as one of the greatest players in the history of the game. You have been an inspiration to us with your resilience,determination & above all the love & passion you showed towards the game. Good luck @YUVSTRONG12 ! pic.twitter.com/vlXUdkgJSz

Congratulations on a wonderful career playing for the country paji. You gave us so many memories and victories and I wish you the best for life and everything ahead. Absolute champion. @YUVSTRONG12 pic.twitter.com/LXSWNSQXog

Thank you for all the amazing moments, @YUVSTRONG12. My best wishes to you for everything ahead, Yuvi pa!😊#YuvrajSingh

We are proud of what you have done on field for our country, @YUVSTRONG12 🙂 Wish you lots of success and good luck for your future endeavours 🤝

You've been a constant source of support and inspiration with countless memories and countless hearts won. 🙏🏻 Congratulations on your glorious career and all the best Yuvi paa! 🏆 @YUVSTRONG12 pic.twitter.com/YngoxWiCOg

My Warrior Prince - A true fighter on and off the field.. your stories will forever live on.. love always brother @YUVSTRONG12 #sixerking #Brother ❤️❤️❤️❤️🤗🤗 #Legend pic.twitter.com/YN7580q8bY

Congratulations on a wonderful career Yuv. You are an inspiration. It's been an absolute pleasure to have played alongside you. Thank you for the memories and guidance thru it all. Wish you all the best in life brother!! 🤗 @YUVSTRONG12 pic.twitter.com/9mtfC8tLrP

One of the greatest match-winners in the history of the game,a fighter who built an extraordinary career through difficult challenges & came out a winner every time-We all are so proud of you #YuvrajSingh , u can be very proud of what u have you done for our country @YUVSTRONG12 pic.twitter.com/w4wUe31De0

Kaan pakad kar retirement wapas khichwane ka dil kar raha hay. But I know bro u have made peace with it. Congratulations on the great career with so many great victories to Indian cricket @YUVSTRONG12 #yuvrajretires #Fighter #champion pic.twitter.com/P6eajET6f7

.@YUVSTRONG12 you've been one of our finest southpaws and I enjoyed playing alongside you. Good luck bro for the life after retirement. It's exciting too😌 pic.twitter.com/mg2gUZ44OP

Well done yuvipa..you are a legend on and off the field...#fighter #inspiration #friend ...I m sure 2nd inning will be even more successful..good things happens to good people...@YUVSTRONG12 pic.twitter.com/UH4P2Rmalg

Yuvraj Singh -
1) All time great one day batsman.
2) Batsman with the greatest bat swing ever.
3) Most impressive International debut I have seen from an Indian batsman.
4) A very selfless batsman.
Enjoy your second innings Yuvi! #YuvrajSingh

Well played @YUVSTRONG12. As @sachin_rt once told you, you were there when India needed you. Enjoyed watching you play, that bat swing will be embedded in my memory, and I hope you are happy and at peace in life after a staggering innings.