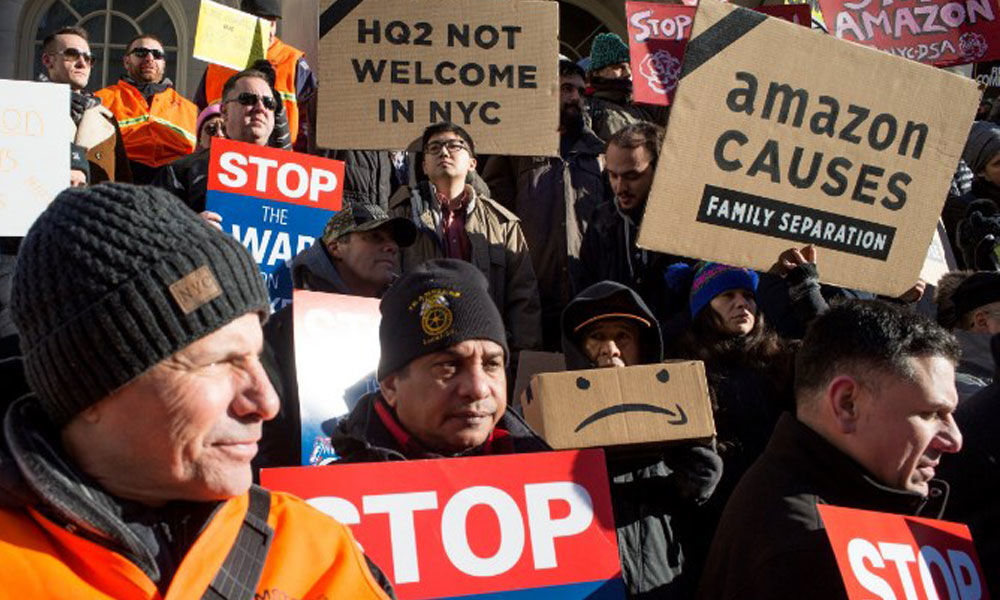 A former Amazon warehouse worker said he was fired as retaliation for speaking out about its working conditions and has filed a complaint against the tech giant.

Recently Rashad Long was dismissed from Amazon's Staten Island warehouse. It followed after his participation in protests against Amazon's HQ2 plans in New York.

On Wednesday, New York labour union, the Retail, Wholesale, and Department Store Union, filed a complaint on Long's behalf with the National Labor Relations Board, saying the retailer has violated federal law.

Long said in a statement, "Recently, Amazon fired me after I spoke out about bad working conditions at their Staten Island Fulfillment Center along with some of my coworkers. My getting fired is a clear act of retaliation by Amazon."

An Amazon spokeswoman told Bloomberg that Long's allegations are false. She told, "His employment was terminated for violating a serious safety policy." Whereas Long told in a statement that Amazon's version of events is "bogus."

Long was part of a high-profile push towards worker unionization and has been a vocal opponent of Amazon's working conditions. He said, "They talk to you like you're nothing - all they care about is their numbers," when he and other workers joined a protest against Amazon's New York HQ2 expansion. During the protest, a statement from Long condemning Amazon's working conditions was read out by another participant.

He told, "I'm filing charges of unfair labour practices because it's unfair and wrong that Amazon fired me for speaking out and organizing at my workplace. I plan to continue to support Amazon's workers in New York City as they fight to improve their workplaces, their jobs, and their lives. It's a fight they can and should win."

RWDSU President Stuart Appelbaum hinted that more filings could happen, he said in a statement, "We are prepared to file more unfair labour practices charges on behalf of any Amazon workers here in New York who are mistreated or fired by their employer for organizing or speaking out."

"We urge New York's elected officials to condemn Amazon's firing of Rashad, and the company's retaliation against him for organizing and speaking out."