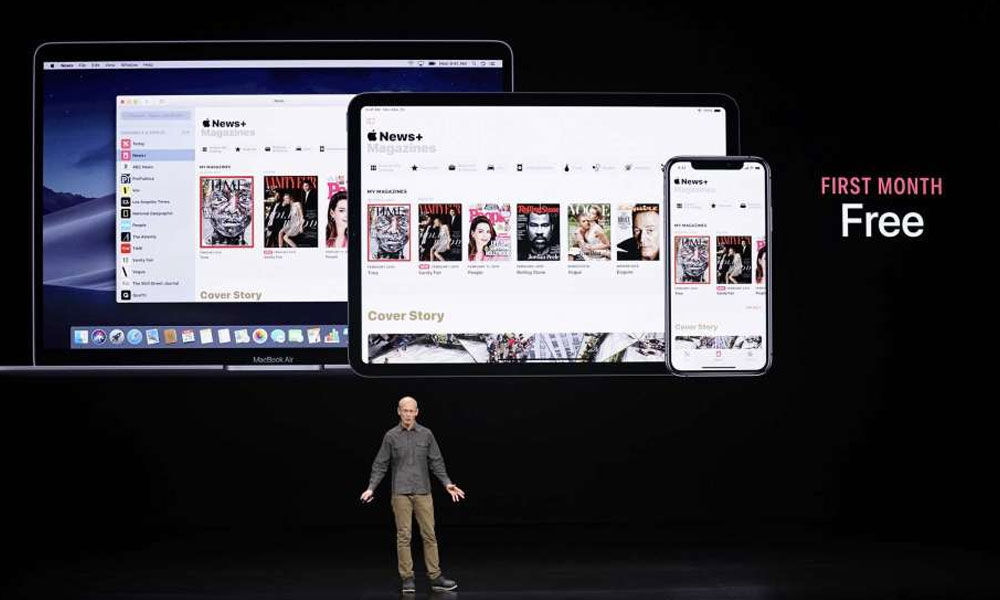 On Monday, Apple launched what some have called a "Netflix for news" — a $10-a-month subscription service that offers access to hundreds of magazines and a handful of newspapers.

New York: On Monday, Apple launched what some have called a "Netflix for news" — a $10-a-month subscription service that offers access to hundreds of magazines and a handful of newspapers. But most major US news publishers aren't participating.

For Apple, pushing into services could help drum up money as sales of its marquee product, the iPhone, start to slow . It's also developing an entert ainment hub with original shows and movies and launching a new credit card. Readers get access to articles from over 300 magazines, a smattering of digital sites and some newspapers. Human editors will select stories for the app, which will tailor news feeds to a reader's tastes. Apple pushed a privacy angle, saying advertisers won't track what you're reading the way Google and Facebook do across apps and websites. For publishers, the situation is complicated. Many big-name magazines are on board, hoping Apple brings them new paid readers.

But many magazine articles are already available free online, even for magazines that are behind a paywall. The app, for now, lacks most major US newspapers. They may feel like they can find readers better on their own, or be wary of the terms of the revenue split with Apple, said Rick Edmonds, a media analyst at the Poynter Institute. Earlier attempts to sell bundled newspaper and magazine subscriptions never took off in the US. It's difficult to convince people to pay for yet another subscription, especially when so much material remains available online for free. Apple, however, is still Apple.

Its Apple Music service has more than 50 million subscribers despite its late start in music streaming. Getting users to download a new app can be hard, and Apple doesn't have to do that. Its existing News app, which brings together articles from around the web, already comes installed on its devices. The new service will be a paid section of that app. Publications that are just beginning to build a digital business could benefit from exposure to Apple's nearly 1 billion iPhone users. "That's a way to get a running start," Edmonds said. Many of the media companies involved say they see it as a way to reach people who wouldn't otherwise subscribe. Apple will reportedly split revenue 50-50 with the publishers.

Payments to each publisher will vary and depend on how much time readers spend with each one. More than 30 of Meredith's magazines, including Martha Stewart Living, People and Real Simple, will be in the app, with the same articles and ads as print subscribers get, said Meredith Magazines President Doug Olson. "We look at this as net new consumers," Olson said. Other well-known magazines in the app include The Atlantic and big names from magazine powerhouses Conde Nast and Hearst, including Bon Appetit, Elle, Esquire, The New Yorker, O: The Oprah Magazine, Vanity Fair, Vogue, and Wired.

Conde Nast did not respond to questions. Three newspapers were included in Apple's presentation — The Wall Street Journal, The Los Angeles Times and Toronto Star. Notably absent were national powerhouses The New York Times and The Washington Post; large US newspaper chains such as Gannett, the publisher of USA Today; and newswires such as The Associated Press. The Journal, famous for its business and industry coverage and commanding nearly $40 a month, will feature "specially curated" general-interest news available for Apple customers. Other stories will still be there, though, if perhaps difficult to find — Apple says users can search for other articles they want inside its app.

The deal gets Journal stories into the hands of people who "most likely would never have a chance to take out a Wall Street Journal membership," said Will Lewis, CEO of the Journal's parent, Dow Jones. (Lewis is also an AP board member.) He is optimistic about Apple's ability to grow the Journal's readership despite many competitors being "down on" the new service. The Journal has also tried to chase new readers on other platforms, such as with stories formulated for young people-dominated Snapchat. Apple's large cut of revenue and the loss of a direct relationship with readers and their data may not be appealing to many media companies, especially those that are successfully expanding their own digital readership.