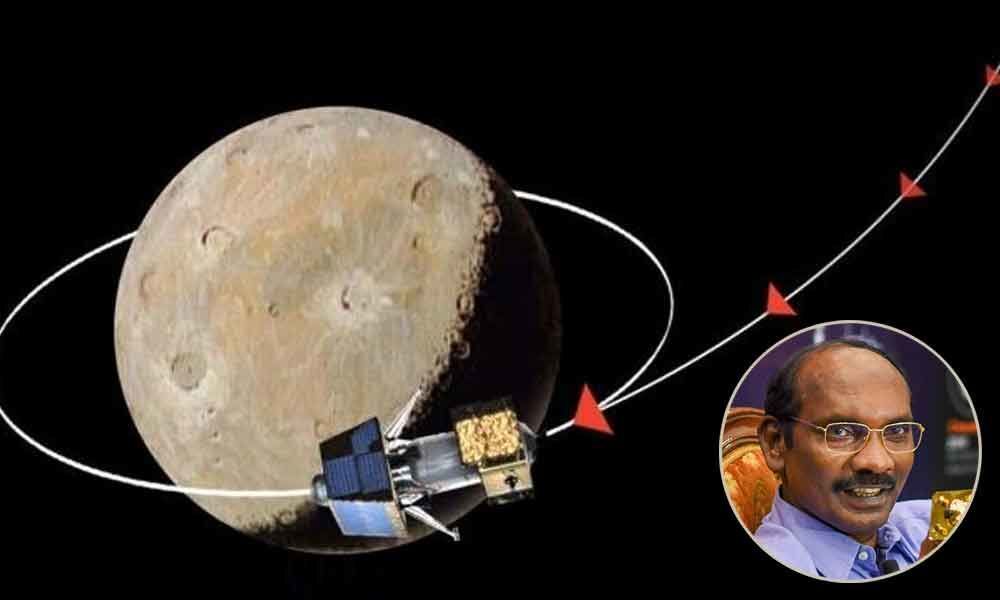 Sriharikota: The Indian Space Research Organisation (Isro) has successfully guided Chandrayaan-2 into an elliptical orbit around Moon. After a few more manoeuvres, the lander (Vikram) is expected to touch down on the lunar surface at 1.55am on September 7.

Right now, Chandrayaan-2 is an integrated spacecraft comprising the orbiter on which Vikram is attached. Vikram, in turn, has inside it Pragyan (rover), which is expected to roll out about four hours after the lunar landing.

On August 21, Chandrayaan-2 will perform a manoeuvre to lower its orbit around the Moon. Between 12:30 pm and 1:30 pm, the Chandrayaan-2's onboard propulsion system will be used to descend slightly towards the Moon.

Once the manoeuvre is successfully completed, Chandrayaan-2 will be in an elliptical orbit of 121 kms x 4303 kms -- the probe will be 121 kms away from the Moon at the orbit's nearest point and 4,303 kms away at its farthest point.

A week after the first orbit manoeuvre, Chandrayaan-2 will perform another similar manoeuvre. This manoeuvre will be performed between 5:30 am and 6:30 am on August 28 and will place the spacecraft into an elliptical orbit of 178 kms x 1,411 kms around the Moon.

On August 30, Chandrayaan-2 will perform its penultimate orbit manoeuvre around the Moon. This manoeuvre will be performed between 6 pm and 7 pm.

Once the August 30 manoeuvre is completed successfully, Chandrayaan-2 will be in an elliptical orbit of 126 kms x 164 kms.

By the night of September 1, Chandrayaan-2 will be closest to the Moon. Between 6 pm and 7 pm, an orbit manoeuvre will bring Chandrayaan-2 into a near-circular orbit around the Moon.

On September 3, Isro will carry out a three-second manoeuvre to check that the lander Vikram is in good health.

Over the next three days, the Isro will keep checking the parameters of the lander to make sure that everything is a-okay.

On September 7, at 1:40 am, the "15 minutes of terror" for the Isro scientists back home will begin. The lander Vikram will begin its powered descent on to the surface of the Moon.

Vikram will be attempting what no other country has been able to successfully to do -- perform a 'soft landing' near the south pole of the Moon.

3:55 am: Around two hours after landing, Vikram's ramp will open, allowing the six-wheeled rover Pragyaan to come out.

5:05 am: Pragyaan will deploy its solar panels, which will use solar energy to power the many systems on board the rover.

5:10 am: Pragyaan will begin moving around on the lunar surface. Its mission life is for one lunar day, which is equivalent to two weeks on Earth.