From tusks to tails, nations eye trade in endangered species 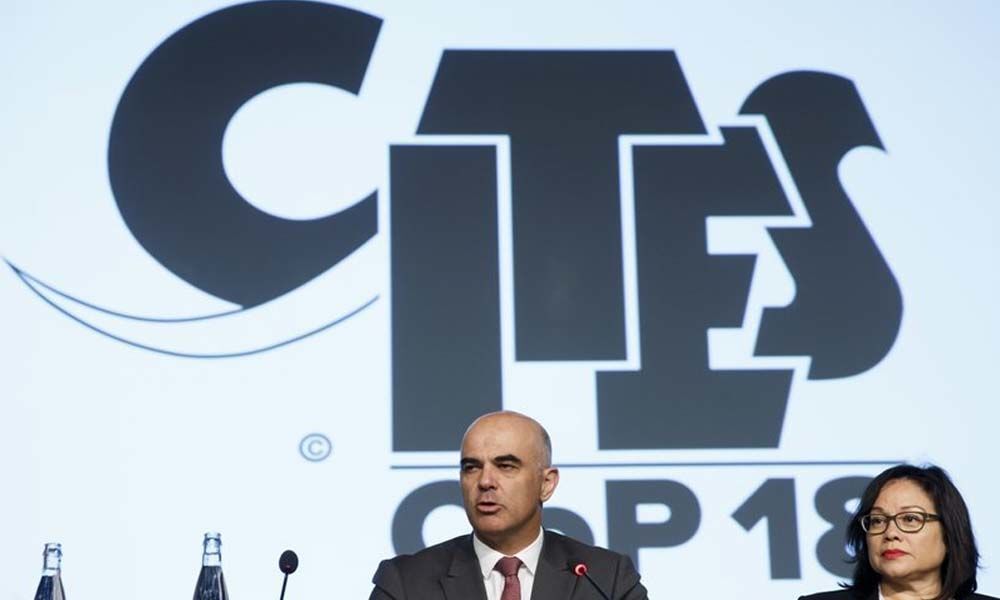 From guitars to traditional medicines and from tusk to tail, mankind’s exploitation of the planet’s fauna and flora is putting some of them at risk of extinction.

GENEVA: From guitars to traditional medicines and from tusk to tail, mankind's exploitation of the planet's fauna and flora is putting some of them at risk of extinction. Representatives of some 180 nations are meeting in Geneva to agree on protections for vulnerable species, taking up issues including the trade in ivory and the demand for shark fin soup.

The World Wildlife Conference on trade in endangered species, known as CITES, which takes place every three years, aims to make sure that global trade in specimens of wild animals and plants doesn't jeopardize their survival.

The conference opens Saturday and runs through Aug. 28, with key decisions expected to be finalized in the last two days. It had originally been due to take place in Colombo in May and June but was moved to Geneva after a series of terror attacks in the Sri Lankan capital.

The gathering follows three months after the first comprehensive U.N. report on biodiversity warned that extinction is looming for over 1 million species of plants and animals. There are growing concerns that policymakers aren't acting quickly enough to stop it.

It also comes just days after the Trump administration announced plans to water down the U.S. Endangered Species Act — a message that could echo among attendees at the CITES conference, even if the U.S. move is more about domestic policy than international trade.

CITES bans trade in some products entirely, while permitting international trade in other species provided it doesn't hurt their numbers in the wild.

Demand is diverse for animal and plant products, prized for their medicinal properties or as pets, culinary delicacies, and products for knitwear and handbags — among many other uses.

Customs officials around the world know to be on the lookout for the CITES logo on shipments of plants and animals across borders: It amounts to a highly respected seal of approval that trade in such species is legitimate.

The meeting's agenda contains 56 proposals to change — mostly strengthen — the level of protection among vulnerable or endangered species. But some argue that protections should be downgraded because the relevant populations have stabilized or even increased. Officials say the decisions are to be based on science, not political or other considerations.

"The new wildlife trade rules ... cover an array of mammals, birds, reptiles, amphibians, trees and other plants. Twenty listing proposals are inspired by concern over the growing appetite of the exotic pet trade for charismatic amphibians and reptiles," CITES says.

Africa is facing an internal debate about elephants and ivory.

Zambia — which argues its population of wild African elephants is large and stable, at about 27,000 — wants to "downlist" that population to allow for ivory stockpile sales and exports of hunting trophies, hides and leathers. A few other countries in southern Africa want another rule on elephants eased. But 10 other countries — all but one African — want total protection for elephants from any international ivory trade.

Israel is even proposing tougher regulations on the legal trade of mammoth ivory, hoping to undercut illegal traffickers of elephant tusk who sneakily try to pass it off as "ice ivory" — ivory that comes from mammoth tusks.

Elephant and mammoth tusks can be almost indistinguishable to the untrained eye, and the mammoth ivory trade has become a booming business. Conference attendees will have to determine whether products from a long-extinct species can or should be covered by CITES.

Advocacy group Avaaz says one key question is whether Japan, home to the world's largest legal ivory market, will join other countries committed to closing their ivory trade.

"Japan's ivory market is fueling the international illegal ivory trade," Avaaz campaigner Andy Legon said in an e-mail. "And with elephants facing extinction, China, the U.S., Hong Kong SAR, Singapore and others have recently committed to closing their ivory markets."

Flora, arguably a less glamorous subject than animal life, also gets spots on the agenda. One proposal, for example, would exempt musical instruments from trade restrictions on a type of rosewood that's prized by guitar makers.

Also on the agenda are sharks. Some researchers say commercial demand for shark fins — largely driven by the Chinese appetite for shark fin soup — is decimating populations.

Sharks are getting some support in high places, including from retired basketball all-star Yao Ming, who led China's Olympic team three times. Yao became a WildAid ambassador in 2006 when he signed a pledge to give up shark fin soup and has since appeared in numerous ads calling for diners to skip the luxury soup to save sharks.

Luke Warwick of the Wildlife Conservation Society said dried shark fin can command up to $1,000 per kilogram, and listing more shark species to the CITES list would be just one of several measures needed to help vulnerable populations of the predators of the deep.

"You've got this huge, unsustainable global trade in shark fin and huge parts of it, 80%, are not regulated, with millions of animals dying," he told a Geneva news conference this week. "We're watching them disappear before our eyes."

"We would be ensuring future trade is sustainable ... before it's too late," he said. "We want to see the oceans protected for future generations."