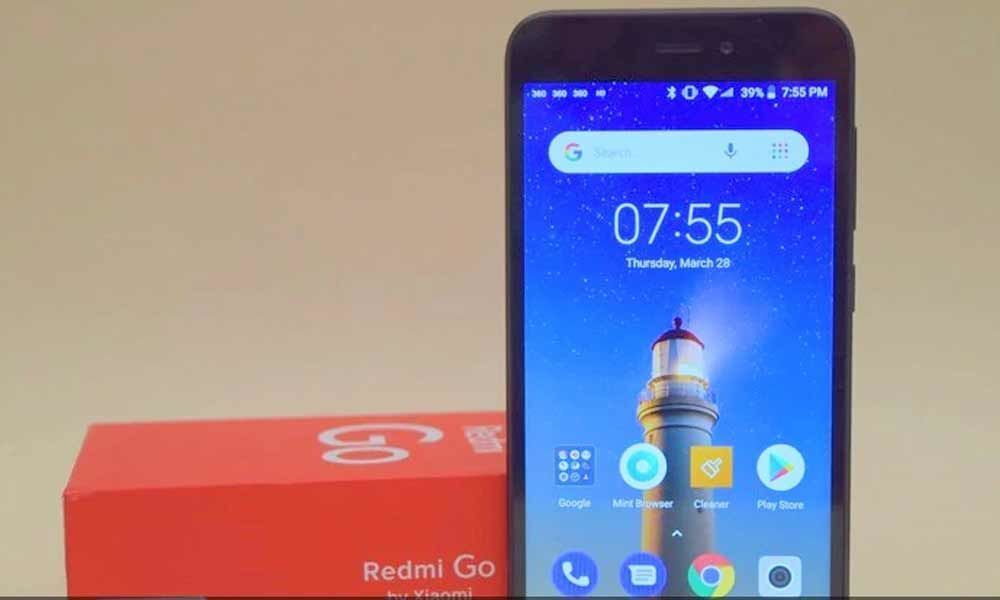 Xiaomi is known for its habit of offering new phones with features and specifications that defy the category, to the delight of Indian smartphone buyers. This has catapulted the company to the number one position in terms of market share in just a few years.

Xiaomi has made a name for itself with its hardware, as well as with the custom ROM of MIUI for Android, which has many features and a number of loyal followers. The reason why the company's decision to launch an entry-level smartphone with very basic specifications and the reduced Android Go operating system was a surprise.

Can Xiaomi bring its magic to the segment of very low-level smartphones? It's the new Redmi Go, with a price of only Rs. 4,499. The ideal device for those who update for the first time from a feature phone? Let's find out.

The Redmi Go is a very simple looking phone, but it seems that it is much more expensive than it is. You could not say it's so affordable just by looking at it. The body is completely plastic, but there are no ugly seams or other signs of cost reduction. The back is well curved, and there is no flexion or any other sign of weakness.

On the front of Redmi Go, we have a 16: 9 rectangular screen with Android capacitive buttons underneath, and thick edges around it. This feels like a throwback since most budget phones today have moved to 18: 9 or higher screens; Many even with notches. There is nothing wrong with this, of course. We only have one minor complaint, which is that the capacitive buttons are not backlit, which makes them a bit difficult to find in the dark.

The Redmi Go is offered in plain black and a more vibrant blue finish.

The screen measures 5 inches diagonally, which makes it smaller than most low-cost phones today. Even with a large amount of black plastic above and below the screen, the Redmi Go is quite compact and very easy to use with one hand. The weight 137g is also well below today's average. All this is good news for people who do not like the big and difficult to handle that many of today's phones have become.

There are two trays on the left, one for a Nano-SIM and one microSD card, and the second for another Nano-SIM. This is interesting since even some of the higher priced Xiaomi models have hybrid dual SIM slots. We can find the power and volume buttons on the right side. There's a Micro-USB port on the bottom, along with a speaker grill, and you'll find a 3.5mm headphone jack on the top. The only rear camera is perfectly flush with the back of this phone, which means that the lens could be susceptible to scratches. One thing that is missing is a notification LED.

The screen of the Redmi Go surprised us by its resolution of 720x1280. Not long ago that the best we could expect at this level was panels of 480x854 or 540x960 pixels. At 5 inches, this screen is quite sharp. Although the colours are a little off, the viewing angles are very good.

Fortunately, Xiaomi has not spared too much, so there are an ambient light sensor and the basic accelerometer and proximity sensors, but there is no gyroscope or compass. If you want to stream video while travelling, keep in mind that this phone is only compatible with Widevine L3 DRM, not L1, which means you will be limited to non-HD quality videos in applications such as Netflix. There is also no fingerprint sensor or facial recognition.

Xiaomi has chosen to adopt Android Go, but we still have the Android 8.1 version, instead of Android 9 Pie (Go Edition). This means that it runs better with less RAM and requires less storage space for the phone itself. Google has optimized several of its own applications, so you'll see YouTube Go, Maps Go, Gmail Go and Assistant Go in addition to the Google Go application. Still, you get the regular versions of Chrome and Google Photos.

The Google Go application is something like a home screen itself. You'll get quick shortcuts to Google's text, photo, voice and GIF search tools, as well as a search bar at the bottom of the screen where your thumbs should be. The search results are opened within this application, which makes it a web browser as well.

A large play button in the centre of the toolbar causes the application to read the contents of a web page aloud, in the voice of Google Assistant. This seems to be something that non-technology experts can take advantage of. The Google Go application also allows you to choose several shortcuts of third-party applications optimized for display, although they sometimes lead to the web pages of the respective services.

The Redmi Go hardware is sufficient for the very basic use of smartphones. The processor is decent, but having only 1 GB of RAM is a bottleneck. We saw occasional breaks when doing simple things like opening a menu in an application or scrolling through a heavy application like Google Play Store. It also took a while to load the applications, even if they were running shortly before. Sometimes, the user interfaces animations when opening and closing applications also stuttered a bit. However, in general, the use was much more pleasant than we expected from a sub-R. 5,000 phones.

Go applications have interesting functionality. YouTube Go shows exactly how much data each video will consume before playing it, and you can force a higher or lower quality if desired. You can also quickly save some videos so you can play them over and over again without consuming more data. Maps Go has quick shortcuts for directions that include routes optimized for two-wheelers. Go applications are supposed to start in less than five seconds, and this was generally the case.

Fresh out of its box, our Redmi Go review unit had only 58 per cent of its 8GB of free storage space for us to use. You probably do not have large games installed since they simply will not run. Still, we believe that most buyers will need to collect a microSD card for all their media storage requirements.

Considering its price, the Redmi Go has two main things: its processor and its screen. The Qualcomm Snapdragon 425 SoC is now quite old, but still appearing in new phones. You get a 3000 mAh battery, which should be fine since there is no hardware to stress this phone. Fast charging is not compatible.

On the other hand, it is disappointing to have only 1 GB of RAM and 8 GB of storage. That small RAM might be fine for the optimized Android Go UI, but many applications will demand more. As for storage, the dedicated microSD card slot will allow you to add up to 128GB of storage, but those 8GB of internal storage will fill up very quickly. During our review process, we were not even able to have all of our standard benchmarking applications and test files on the phone at the same time.

The Redmi Go is not as flashy as the slightly higher price offers from Xiaomi. However, it still offers relatively good hardware for the price, which is a great gain for people with very tight budgets or very simple needs. We just want there to be at least one option with more RAM and storage space.

We will not find many opponents who can contest these specifications at this price, but Asus does offer a compelling alternative with its ZenFone Lite L1 officially released at Rs. 6,999, this phone goes on sale regularly and repeated for only Rs. 4,999 on Flipkart. For only Rs. 500 more than the Redmi Go, gets the most powerful Snapdragon 430 processor, 2 GB of RAM, 16 GB of storage and some other amenities.

This also shows that if you can spend a little more, you should consider phones like the Redmi 6A, which will work better and last longer.