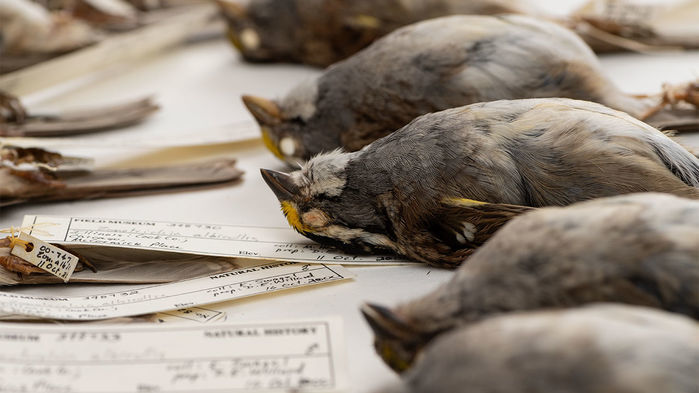 Texting while driving can be deadly. So can tweeting while flying, a new study finds—among some species of migratory birds. Researchers have found...

Texting while driving can be deadly. So can tweeting while flying, a new study finds—among some species of migratory birds. Researchers have found that birds using faint, high-frequency vocalizations known as flight calls during their nighttime migrations are losing their bearings, crashing into buildings, and possibly luring more birds to their untimely ends.

Many bird species, including warblers, thrushes, and sparrows, use nocturnal flight calls to help the flock navigate while migrating. Past studies have found that these birds chirp more often when flying over urban areas with lots of artificial light, leading scientists to wonder whether the light disorients them and causes them to call out even more.

To see whether there was any connection between these flight calls and the number of birds crashing into city buildings, researchers used 40 years' worth of bird collisions in Chicago, Illinois, which just this week was named one of the most dangerous cities for migratory birds. The team also used 1 year of data on bird collisions in Cleveland, Ohio, totaling more than 70,000 flight records from 93 species.

The species that frequently collide with buildings are the ones that use nocturnal flight calls, the researchers report today in the Proceedings of Royal Society B. The calls themselves could be part of a vicious cycle, the scientists add: Birds disoriented by the artificial lights call out, attracting other birds, which then also crash into the bright buildings.

By illuminating this key avian behavior, scientists hope to better understand the human impact on our feathered friends—and convince people to turn their lights off at night.