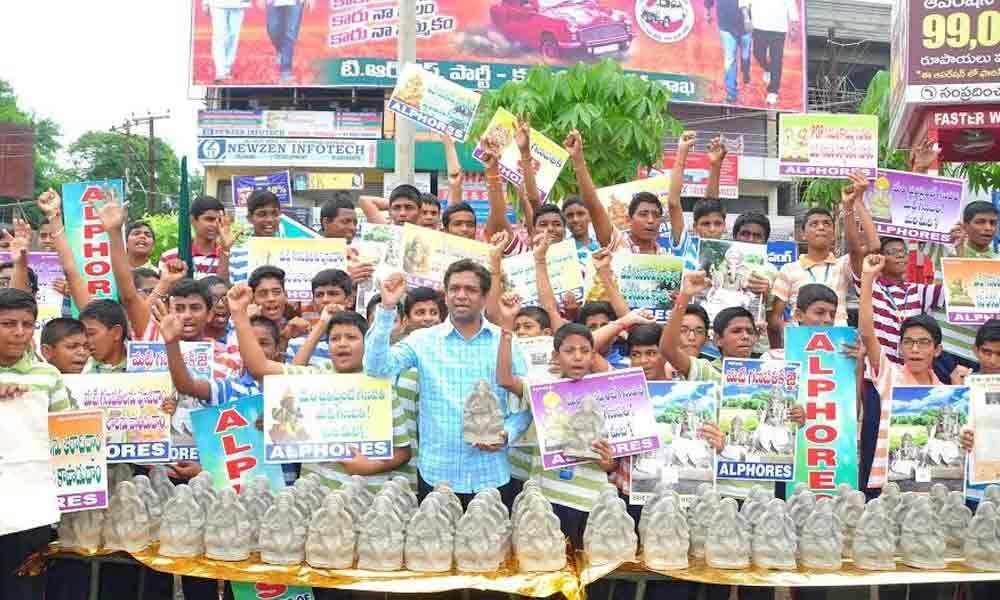 The students of Alphores Educational Institutions held an awareness rally on the installation of Clay Ganesh Idols from Telangana Chowk to Collectorate here in Karimnagar.

Karimnagar : It is the responsibility of every to protect environment and that can be done by installing clay Ganesh idols during the Ganesh Chaturthi festival, said the Chairman of the Alphores of Educational Institutions, Dr.V.Narendar Reddy here on Saturday.

The students of Alphores Educational Institutions held an awareness rally on the installation of Clay Ganesh Idols from Telangana Chowk to Collectorate here in Karimnagar.

Speaking on the occasion, Dr.V.Narender Reddy said that every organised would wish to install a huge Ganesh idol in the ganesh pandals that would be established in their colonies during Ganesh Chaturthi festival.

But by keeping in mind of social responsibility and in view of protecting environment, it would be better to install Clay Ganesh Idols instead of those which is prepared of various chemicals which would harm the acquatic animals by polluting the water bodies.

History also tells us that in the olden days, including Gods also use to install Ganesh Idols made of clay but not with other materials. Moreover it would support water animals and will be eco-friendly also, he advised.

Later, the students distributed clay Ganesh idols freely to the people explaining the need of installation of clay Ganesh Idols. The representatives of the various peoples' organisations Satish, Raju and teaching staff were present in the rally along with others.