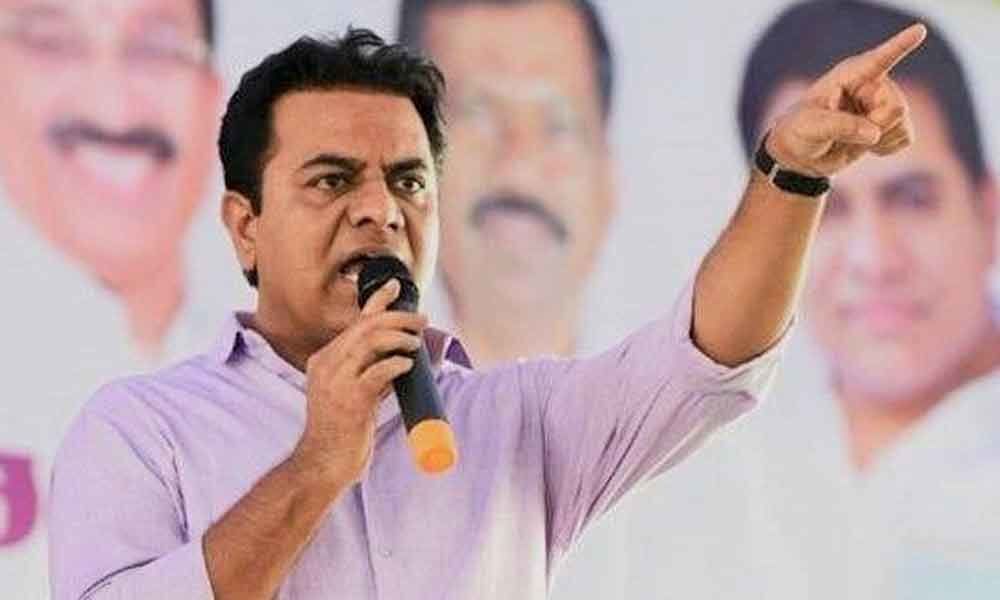 Nadda is a bundle of lies, says TRS working president

Hyderabad: The way the BJP is going aggressive keeping the ensuing municipal and local body elections in view, the TRS party has decided to put a check to the moves of saffron party and has galvanised all their leaders to give effective counter to the series of allegations being levelled by the BJP.

Leading the counterattack on BJP, TRS working president K T Rama Rao even went to the extent of saying that some JP Nadda had come to Hyderabad. "I have never even heard of him.

The BJP working president read out a sheet full of allegations which was handed over to him by his local party leaders. There is not even an iota of truth in it," he said.

Referring to the comment that the state had deprived the people of Ayushman Bharat scheme, he said it was a deliberate and well thought decision as it is "Bakwas scheme".

He said the state was implementing Aryogyasri which was hundred times more beneficial to the people. Accepting that some minor problems were there, he said they would soon be sorted out by the government. He said if the BJP thinks that it can re-enact the Karnataka-type drama here, it will not be possible.

KTR said JP Nadda should change his name as 'Abadhala adda' because all he spoke were lies. This is 'adda' of sons of Telangana and Nadda's or BJP's games will not work here, he said.

Congress and BJP don't like peaceful Hyderabad. They are not in favour of farmers well-being. Nadda says there was misrule in the state by KCR government. If that is correct, why TRS has won with a huge majority in the last Assembly elections, he asked. Referring to Kaleshwaram project, KTR said it was completed in a record three years' time.

"The BJP leader says it was commission Kakatiya and commission Bhagiratha. Ask your Delhi officials and NITI Aayog about these schemes. They have recommended the Centre to give funds to these schemes.

If these schemes are not good, why chief ministers of eleven states were following it he asked. "Let him show a single BJP state which has schemes like TRS government," said KTR. The TRS leader further alleged that the aim of Congress and BJP was to create differences among religions as they don't like peaceful atmosphere in the city.

Minister T Srinivas Yadav said that Nadda was right when he said KCR was a real 'Shehanshah'. "No one is afraid of BJP," he said. Another minister V Srinivas Goud alleged that the BJP plays up with sentiment politics. "KCR will be chief minister for another 20 years," he said. Minister Malla Reddy also joined the chorus.