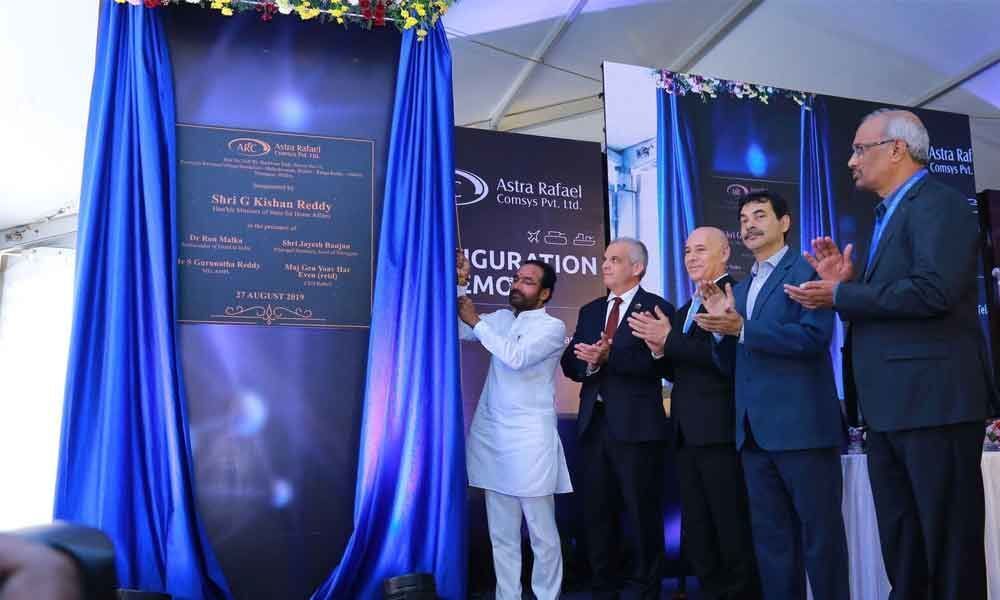 Speaking at the inaugural of Astra Rafael Communication System facility, a joint venture between Astra Microwave and Rafael Advanced Defence Systems Limited of Israel, in Hardware Technology Park, Maheshwaram on the city outskirts, Kishan Reddy stated that many steps have been taken to boost indigenous manufacturing units, which creates a lot of employment opportunities to the youth as part of Make in India mission.

Kishan Reddy said that India and Israel have correlations on various aspects, and both have common interests to eliminate terrorism. The Union minister added that NDA government was targeting to create 9 million jobs every year in all sectors.

This JV setup on a 51:49 per cent basis with all regulatory approvals, is in line with the Government's 'Make in India' initiative and will invest in high-end technology and advanced production techniques to design, develop and manufacture state-of-the-art tactical communication systems (BNET), for the Indian Armed Forces.

Yoav Har-Even, Rafael's president and CEO said, our cooperation with India was strategic based. "This has been demonstrated a number of times, not just in declarations, but in actions.

The inauguration of the facility is yet another proof of Rafael's implementation of India's Prime Minister's Make in India strategy and policy and of our ongoing and uncompromising support for the needs and requirements of the Indian Armed Forces."

Ron Malka, Ambassador of Israel to India, asserted that India has been a precious friend of Israel. "We have to share our experience and knowledge.

That's what friends do," the Ambassador stressed. He also suggested other countries to come and invest in India. Gurunath Reddy, Managing Director of Astra Microwave, said the facility has been set up with an investment of Rs 35 crore.

The facility commenced its operations with a 30 million US dollar order to be delivered within 24 months. A Research and Development facility is also being set up for innovations in new areas. ARC currently has ongoing orders for providing Software Defined Radios to the Indian Air Force (IAF).

The Joint Venture is focusing on the technological ability and indigenous manufacturing capability, combined with Rafael's technology expertise to support the requirements of the Indian Armed Forces.

It will also be involved in the development and manufacture of a wide range of other advanced capabilities, with the aim of opening new export markets.