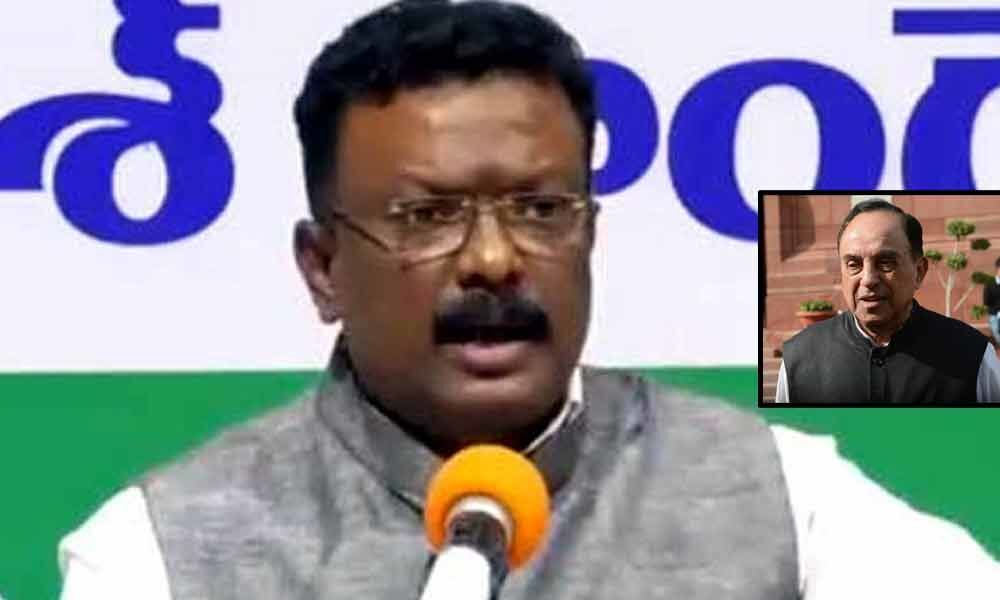 Telangana Congress leaders on Monday lodged a criminal complaint against BJP leader Subramaniam Swamy for his controversial remarks alleging that Congress president Rahul Gandhi consumes a prohibited drug. Based on the complaint, the Abids Road Police Station has issued an FIR.

Hyderabad: Telangana Congress leaders on Monday lodged a criminal complaint against BJP leader Subramaniam Swamy for his controversial remarks alleging that Congress president Rahul Gandhi consumes a prohibited drug. Based on the complaint, the Abids Road Police Station has issued an FIR.

Speaking to media persons outside the police station, All India Congress Committee (AICC) National Spokesperson Dr. Sravan Dasoju said that Subramaniam Swamy gave the controversial statement with an intent to provoke the general public, create hatred, to incite clashes between various classes of persons and to breach peace and tranquility. He reminded that Swamy had levelled similar baseless allegations during the Lok Sabha election campaign raising questions over Rahul Gandhi's nationality.

Sravan said that the BJP leader has become habitual of targetting Congress leaders with baseless statements. He said that the behavior of BJP MP was in total contrast to the statement given by Prime Minister Narender Modi in the Parliament and outside on morality. He asked what action PM Modi would take now against Subramiam Swamy. He demanded that the BJP should suspend Subramaniam Swamy from the party.

The Congress party has described Swamy's statement as 'illegal, vexatious, defamatory and scandalous'.

"The statement made by Subramanian Swamy is highly condemnable and unacceptable. The said statement was made to disrespect and defame Rahul Gandhi and the Indian National Congress Party in the eyes of the voters and general public. Although Subramanian Swamy is aware that the said statements were false, the same were made with an ill motive to encourage and bolster hostility between political parties and to further provoke people to indulge in illegal and notorious actions in breach of public peace and tranquility," the Congress leaders said in their police complaint.

They said that Subramanian Swamy, while making the said statement, was aware that the same are defamatory and would be widely publicized and would reach the general public and that the same would create a controversy with a strong possibility of public outbreak and clashes, more particularly between the party workers of Bharatiya Janata Party (BJP) and the Indian National Congress (INC) all over the country. They alleged that Swamy made the statement with a criminal intent to cause an alarm and a sense of fear in public and to create a state of hostility and breach the law and order in the Hyderabad and also across the nation.

Earlier, the Congress workers held a protest against Subramaniam Swamy and also burnt his effigy.

Later, Dr. Sravan Dasoju, Dr. Mallu Ravi, Anil Kumar Yadav and other leaders visited the Niloufer Hospital to meet 33 students of Minority Residential School who have been admitted in hospital due to food poisoning after consuming hostel food.