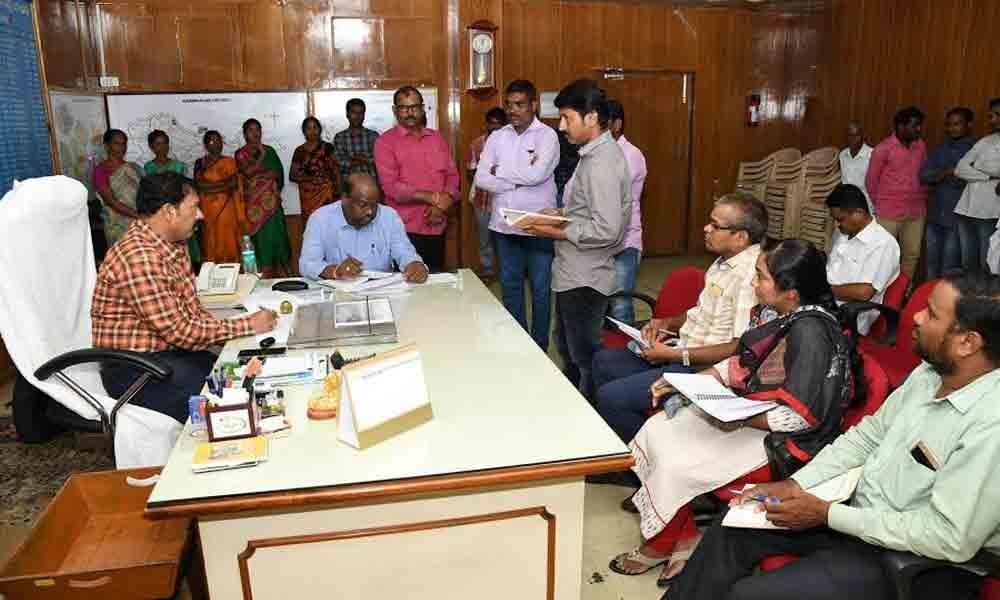 x
In-charge Collector Shyam Prasad Lal at a meeting with civil supplies department officials, tahsildars, ration shop dealers and village revenue assistants at his chamber in the Collectorate in Karimnagar on Tuesday
Highlights

He held a meeting with the officials of civil supplies department, tahsildars, ration shop dealers and village revenue assistants (VRAs) at his chamber in the Collectorate in Karimnagar on Tuesday.

The in-charge Collector ordered the ration shop dealers to distribute the items along with rice to the white ration card holders after taking the Iris or thumb impressions from the beneficiaries.

Do not distribute rice and other items to those, whose iris and thumb impressions don't match with the earlier recorded one. 'The staff should visit the beneficiaries' houses and rectify their details after confirming the same. Then only they should distribute the ration items through ration shops.'

Earlier VRAs used to identify the real beneficiaries but from now onwards this work is handed over to revenue inspectors. The details of disabled persons must be handed over to tahsildars concerned, he ordered.

In-charge Collector Shyam Prasad Lal directed that all the items including rice should be distributed with transparency. Stringent action will be taken against ration dealers, if they are found indulging in irregularities, he warned. District civil supply officer Srinath, Tahsildars of Gangadhara, Manakondur, Ganneruvaram and Shankarapatnam were present along with ration shop dealers and village revenue assistants in