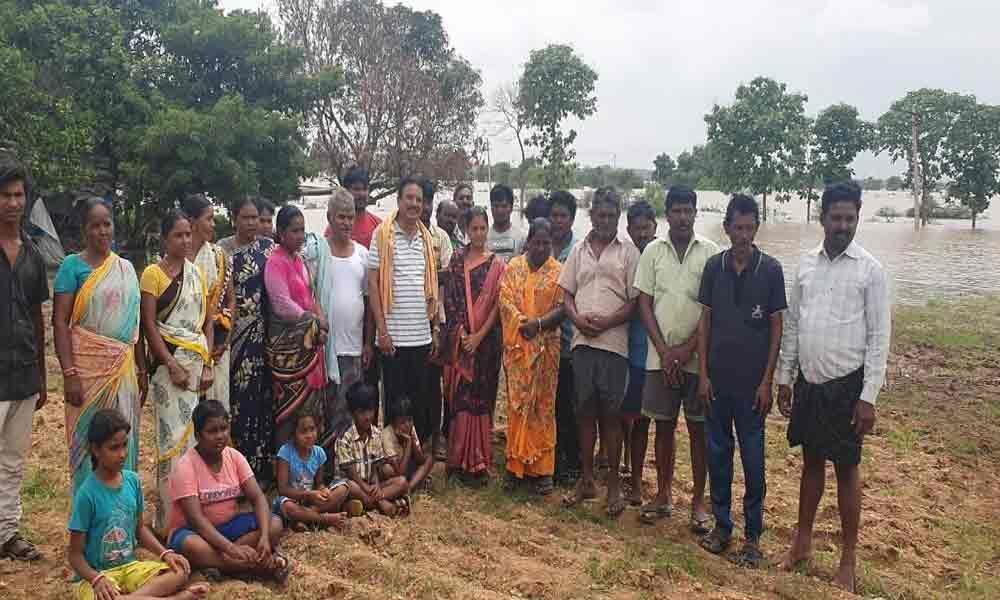 With the Krishna and Tungabhadra rivers are flowing above the danger mark, the farmers, fishermen and the daily wage labourers who have lost all their belongings to the floods are now appealing the government for help.

Wanaparthy: With the Krishna and Tungabhadra rivers are flowing above the danger mark, the farmers, fishermen and the daily wage labourers who have lost all their belongings to the floods are now appealing the government for help.

Though the local district administration has come to their rescued from the flash floods, they are all completely devastated as they have nothing left but debts on their heads.

As many as 15 families from Rampur village of Pebbair mandal have completely lost all their belongings washed away in the floods. They are just left with their cloths as they lost their houses, cattle, fishing lakes, poultry farms, citrus plantation, paddy, mulberry, mango, sapota and coconut plantations in the floods.

Pouring their woes to Hans India, the poor farmers have land on lease and were making a lively hood in Rampur village of Pebbair mandal on the banks of Krishna River said, "We have lost everything, even the people who had given us loans are not asking for our welfare but asking to return the money they have lent us," said Anjayaneilu, a farmer who lost his fishing pond to the recent floods.

Another farmer lost his 35 cattle in the floods and his paddy crop completely damaged. It is estimated that these poor farmers from Rampur village have lost their fishing ponds, plantation crops and agriculture crops of paddy over 35 acres of land causing a huge loss of more than 50 lakh.

In view of the above the poor farmers are urging the government to extend them a helping hand and help them to come out of the debts, as they have lost everything washed away to the floods.