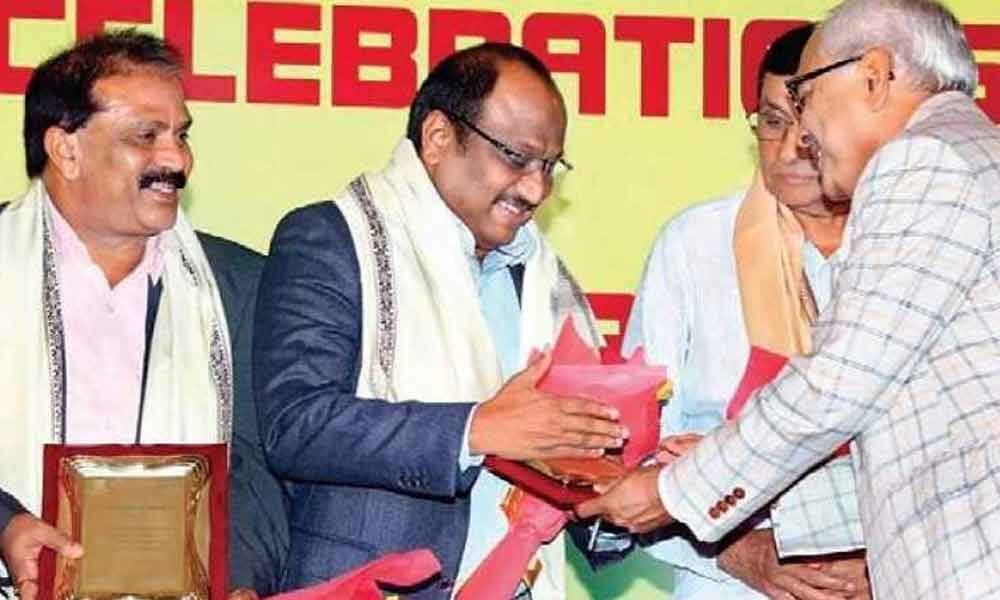 The prestigious Kaleshwaram Lift Irrigation Project got another notable recognition on the occasion of Concrete day.

The prestigious Kaleshwaram Lift Irrigation Project got another notable recognition on the occasion of Concrete day. The premier organization, Indian Concrete Institute, awarded the best outstanding concrete structure of 2019. The execution agency Megha Engineering and Infrastructures Limited (MEIL) and the engineer in chief Kaleshwaram project and other agencies received this prestigious award at a function held on Saturday night. Mr. B. Srinivas Reddy, the director, MEIL, received the award from the president of ICI Mr. Vinay Gupta. Speaking on this occasion, Mr B. Srinivas Reddy said that "We feel honoured with this is an important award. This is the recognition for the engineering marvel KLIP. We used 21 Lakh cubic meters concrete in three pump houses of link-1. We feel proud to be a part of this rare achievement. This award goes for 15000 workers, engineers who worked in three shifts. This project is not possible without the Telangana government's commitment and continuous monitoring. "

The Indian Concrete Institute (ICI) is also given the best concrete structure award to the Amazon building and Khajaguda to Nanakramguda concrete road. The ICI is also constituted awards to encourage the good concrete structure at the district level. On the occasion of Concrete day celebrations, the engineer in chief, Kaleshwaram project, Mr N. Venkateswarlu delivered a lecture on "Engineering challenges in the construction of Kaleshwaram project. Mr P Srinivasreddy, head, ICI, Telangana centre, and eminent engineers also present at the event.

Medigadda Pump House, the first pump house in Link 1, the concrete work of 8.62 lakh cubic meters completed in 22 months. The construction of 1310 cubic meters per day is also a record in the lifting scheme. It is also rare to have 39,700 tons of pipes underground in 18 months.

Similarly, in Annaram Pumphouse, MEIL has completed the construction of 6.13 lakh cubic meters of concrete in 23 months and 55,853 tonnes of pipes in 20 months.