KCR number one corrupt CM in the country: Laxman 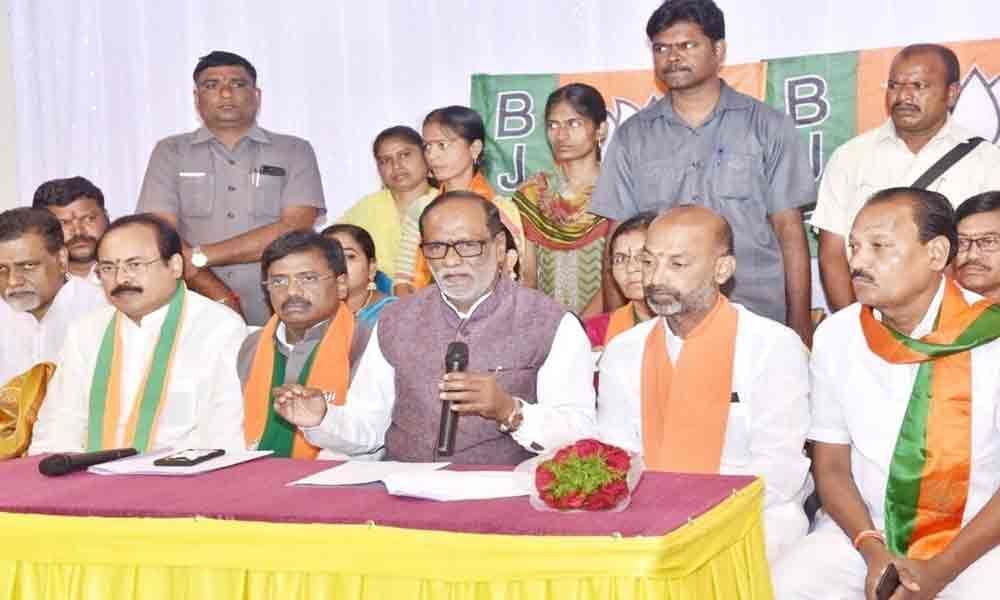 BJP president K Laxman on Saturday said that KChandrashekar Rao is number of one corrupt Chief Minister in the country since he promotes corruption in the State.

Karimnagar: BJP president K Laxman on Saturday said that K Chandrashekar Rao is number of one corrupt Chief Minister in the country since he promotes corruption in the State. He was addressing the media persons in Karimnaga. Laxman alleged that as per the survey conducted by the CMSL, Telangana state stands second in terms of corruption.

Some of ruling TRS leaders of the Karimnagar district are directly indulged in the illegal businesses of granite quarries and sand mining and are earning crores of rupees through commissions, he added.

Even after warning from the CAG regarding irregularities that occurred in the implementation of Mission Kakatiya project, the TRS government did not mend its ways. In every scheme such as Bhatukamma Sarees, Handloom, fisheries, sheep, Aarogyasri and developmental work that is taken up in the state, there is a corruption.

Specially, in the dream project of CM KCR, the Kaleshwaram, corruption of thousands of crores of rupees took place. The TRS government did not submit DPR to the central government fearing of its mistakes which may exposed if submitted.

Even though, the government has Rs1,500 crore Arogyasri dues to hospitals. And there is no signs of sanctioning of fees reimbursement to students, CM KCR is not in a mood to address these issues, instead, he has an obsession of building a new secretariat investing Rs500 crore, he pointed out.

The TRS government for their party offices in the district acquired land in no time and even laid foundation stone along with starting the construction works. But what happened to the promise of distribution of 3 acres of land that is made to the Dalits, he questioned. People are watching every move of TRS party and CM KCR along with its party leaders and are ready to teach fitting lesson in the upcoming days.

The people are looking at BJP eagerly and are wishing that it is the only party which would save them from KCR's family rule, he stated. The MP Bandi Sanjay Kumar, ex minister E Peddi Reddy, ex Peddapalli MP, G Vivek, State executive member K Murali Krishna, district president B Satyanarayana and city president B Mahendar Reddy were present.