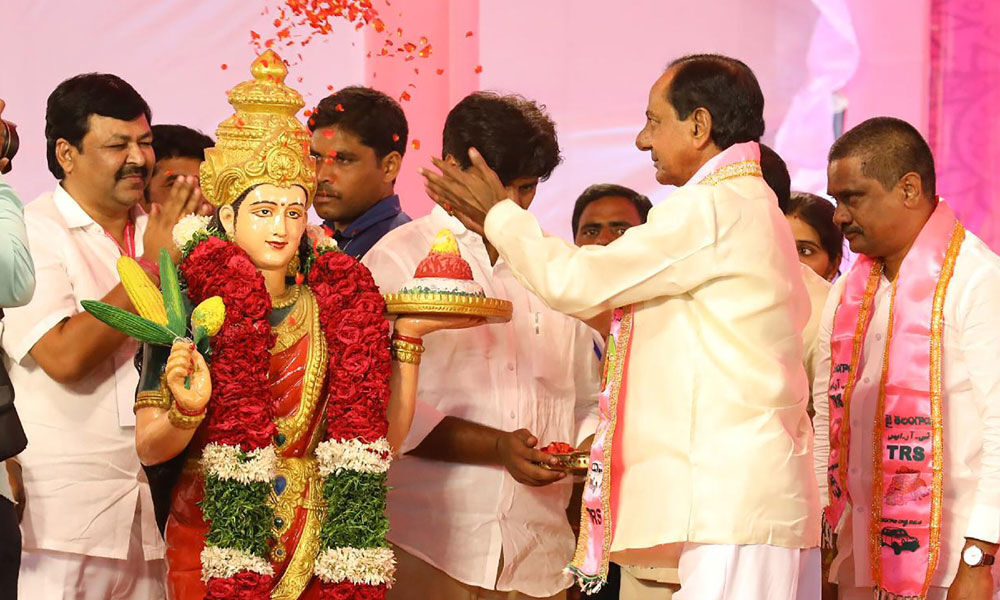 Nizamabad: Chief Minister and TRS president K Chandrashekar Rao on Tuesday asked the BJP leaders in the state to make it clear whether their party is a...

Nizamabad: Chief Minister and TRS president K Chandrashekar Rao on Tuesday asked the BJP leaders in the state to make it clear whether their party is a political outfit or a party for religious campaigning.Responding to Telangana BJP chief K Laxman's demand of clearing stand on Ram Janmabhoomi issue, Chandrashekar Rao wanted an answer from the BJP leader on their party.

"Is yours a political party or a party for religious campaign? First answer my question and then I will tell what my stand is on Ram Mandir. Should the political parties do politics of Rama Janmabhoomi, Ravana Janmabhoomi, Kansa Janmabhoomi, Surpanakha Janmabhoomi? There are seers like Sringeri Peetham, Jagatguru Shankaracharyulu, Chinna Jeeyar Swamy to decide which Janmabhoomi should be at what place.

It is not the work of political parties or Prime Ministers to resolve Janmabhoomi issues. There is Supreme Court to resolve the issue," said KCR.The TRS chief further attacked the Telangana BJP leader stating that he was duplicate Hindu. "They talk about Hindus. Are we not Hindus... are we not going to temples... are we going to temples on the advice of BJP? You are talking as if cursing other religions is Hinduism. Ours is a real Hindutwa not like yours. You are duplicate Hindu Laxman Garu, your games will not work now," said the TRS chief.

The chief minister took exception to the criticism in social media. KCR said that the BJP leaders have formed about 20 groups to curse him. "Did I say anything wrong? The Congress ruled for 54 years and BJP for 11 years. Country would have shined if they had done any work. They did not do anything and nor they allowed others (Prime Ministers VP Singh, HD Deve Gowda and others) to do.

"People are fed up with these two parties. Country needs to have new thought," said Rao. The chief minister pitched for new economic model, new agriculture policy, expansion of Rythu Bandhu, Rythu Beema across the country. There is a need to change the Constitution, crop colonies should come otherwise this country will not change, he said. "We need to change...what we need is not the best practices we need Next practices. They will not change, change should come from people," said KCR.

The TRS chief compared the development in China and Singapore with the development in India and alleged that both the Congress and BJP were responsible for the lack of development in the country. He asked Prime Minister Narendra Modi and Congress president Rahul Gandhi whether there is 24-hour power supply in any of the states ruled by their parties and whether the beedi workers were getting pensions.

KCR said that people of other states want to merge into Telangana because good works are going on here. "We are doing many good things which are not being done in the country," he said. He said that the Federal Front of non-Congress and non-BJP should come for changing the country. He said that every section, including SC, ST, BC were not happy and want the governments to do something for them. He said both parties bring schemes in their party leaders name but never changed the fate of the people.

KCR asked the local farmers for solving their problems after 20 days as he could not make any announcement in wake of election code. He asked the people to elect the TRS candidates, who would be announced on February 21.