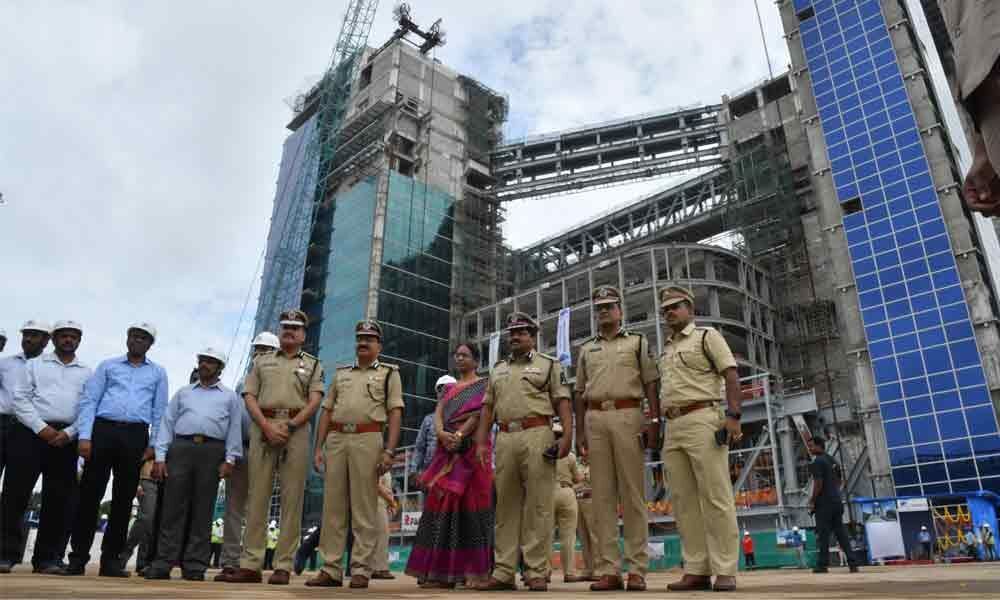 The construction works of Police Command Control Centre at Banjara Hills, Road No 12 picked up pace.

Hyderabad: The construction works of Police Command Control Centre at Banjara Hills, Road No 12 picked up pace. The centre is being constructed as four blocks namely A, B, C and D. Director General of Police M Mahender Reddy performed puja for 425 tonnes lifting of the Sky Bridge from A block to D block on Saturday.

Mahender Reddy addressing the press said this command control centre has been taken up as a prestigious project of the State and with the co-operation of different departments like Finance, Roads and Buildings etc, the process has been going smooth. In the very soon this building will be ready for the public.

K Ramakrishna Rao, Principal Secretary to Government of Telangana, Finance Department said Sky Bridge which is a key aspect in this command and control centre has been started on Saturday. Every city will be having an iconic building and this building will the iconic building of the State.

Hyderabad Police Commissioner Anjani Kumar said this construction shows how Telangana government is ensuring safety and security among the community.

It is also a message that every dollar of foreign investment will be in safe hands. He also praised the construction partner Shapoorji Pallonji Group for the efforts they have put into the work.

This centre would be linked to all the 31-district headquarters, which keeps better vigil on law and order situation and effective control of crime.

The hi-tech Command and Control Centre would befit the image of Hyderabad as global city. The command and control centre being built with international standards at Banjara Hills on seven-acre land. The centre would have buildings with 20 floors with built up area of five lakh square feet.