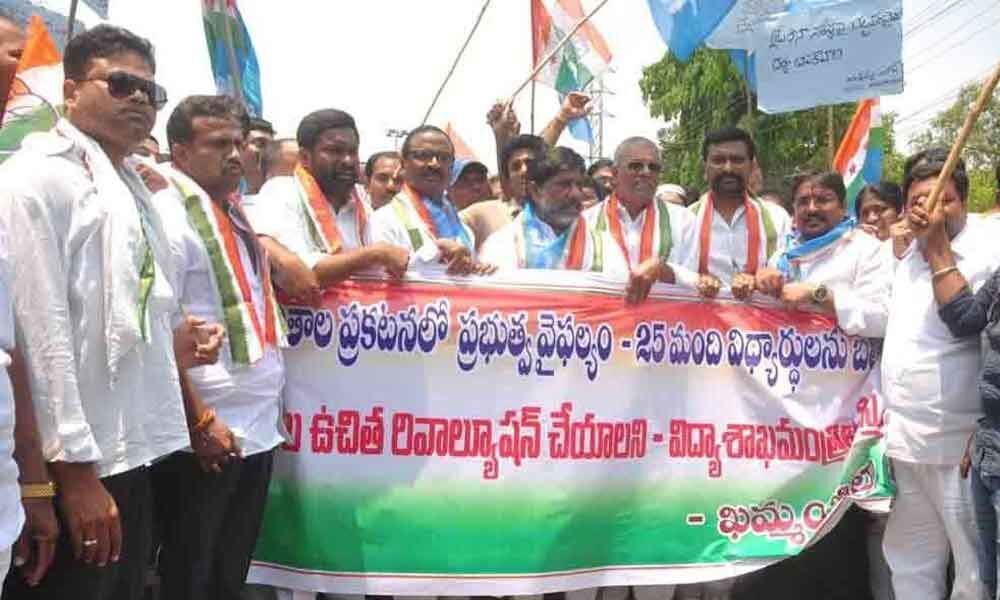 Hyderabad: The Intermediate results fiasco has given enough ammunition to the Congress party to fight against the ruling party against its failure in providing better governance.

The Congress is planning to intensify the struggle on the issue.

Party leaders feel that the ruling party is not in a position to defend itself in the issue.

Congress leaders said that the month of April has proved to be a 'good month' for the party as it got good number of issues to corner the ruling party.

They said that the goof up of intermediate results has provided much needed weapons over the other issues.

In the month of April, the ruling party found itself on the back foot after the demolition of Ambedkar Statue at Panjagutta in Hyderabad.

The GHMC staff removed the statue and in this process the statue broke into pieces.

The Congress leaders swung into action and demanded that the government take action on those involved. The ruling party was unable to give a reply to this.

Soon after this, intermediate results fiasco shook the State. Several students committed suicide and several others are staging protests outside the State Board office.

Amidst the results fiasco, the murder of girls at Hajipur of Bommala Ramaram Mandal in the suburbs of Hyderabad rocked the State.

Even in this issue, the ruling party was unable to defend itself.

Several Congress leaders visited the village and announced their support to the families of the victims.

Meanwhile, the agitation against the Intermediate results goof up also picked up momentum. Though the Congress picked up the issue with a delay of few days it was able to turn the tables.

The ruling party was unable to give a reply to this issue and has been depending much on the officials of the Intermediate Board for relief.

The Congress which has staged dharnas and other types of agitations, has decided to intensify the struggle.

Telangana Pradesh Congress Committee (TPCC) working president A Revanth Reddy made it clear that the goof up of Intermediate results could not be limited to just mismatch of marks, but it has more than what the eye could meet.

He said that the party would not keep quiet with just matching of marks but would fight for an in-depth inquiry.

He said that several violations of rules have taken place in the issue and one software company was preferred.

He said that rules have been relaxed beyond limits and the Globarena company was awarded the work.

He linked the scam to TRS working president K T Rama Rao. He alleged that KTR's nepotism was the reason for the fiasco.

As the government was unable to give reply to the questions raised by the Congress, the party leaders now see it as a clear advantage to it.

They have been planning more activities in the coming days to corner the government.

The TPCC would announce its action plan at the end of the week and it may intensify its struggle in the second week of this month after its leaders return from the ZP and MPP elections.