Revuri, a shot in the arm for BJP 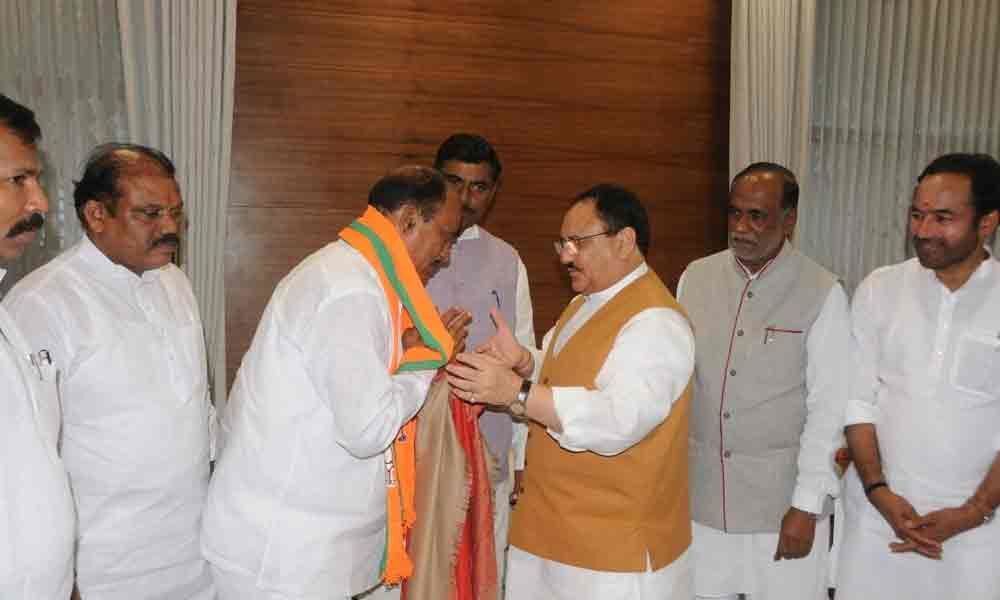 Putting weeks of speculation to rest, one of the Telugu Desam Party (TDP) strongman in Telangana Revuri Prakash Reddy joined the Bharatiya Janata Party (BJP) in Delhi on Wednesday.

Warangal: Putting weeks of speculation to rest, one of the Telugu Desam Party (TDP) strongman in Telangana Revuri Prakash Reddy joined the Bharatiya Janata Party (BJP) in Delhi on Wednesday. Even though the remaining leaders in the erstwhile Warangal district putting on a brave face, the development is seen as the last straw that would break the back of the TDP.

Since that last batch of several TDP leaders led by the Rajya Sabha member Garikapati Mohan Rao had left the party almost emptying it to join the saffron outfit a fortnight ago, the writing was on the wall that TDP Politburo Revuri Prakash Reddy will also follow the suit.

Revuri Prakash Reddy who won the Narsampet Assembly seat thrice – in 1994, 1999 and 2009 – is said to be one among party chief N Chandrababu Naidu's trusted lieutenants in Telangana. In fact, he had been the mainstay of the party in erstwhile Warangal district for the last few years.

He stood with the party even in adversity even though leaders like Kadiyam Srihari and Errabelli Dayakar Rao switched over to Telangana Rashtra Samithi (TRS). The TDP has been facing existential crisis in the State since its debacle in 2018.

Even though it had contested from just 13 seats in the 119-member Assembly, as part of the Congress-led grand alliance, the TDP needed to put up a good show to stay relevant in the State politics.

"With the party also facing a drubbing in the recent Andhra Pradesh Assembly elections, several leaders started to look at other parties. With the Congress losing sheen, understandably BJP, which is at the helm of affairs at the Centre, has become the only resort for the leaders who tooth and nail oppose the ruling TRS.

As a result, most of the TDP leaders started to join the saffron party," a TDP leader said. Speaking to The Hans India over phone from New Delhi, Revuri Prakash Reddy said: "The dynamics of political situation in Telangana State suggest that there was a dire necessity for the realignment of forces, and the BJP, at this point of time, is the only potent party that can fight against the despotic rule of the TRS. The desired aspirations of people in Telangana are still a far cry even after five years as KCR was able to hoodwink the people tactfully."

With no able leadership at the helm of affairs, the Congress appears to be struggling to cope with the changing political scenario in the country, he said. Referring to his association with the TDP, Revuri said that the party's contribution in the development of Telangana is immense.

"Far from truth," he said, refuting the allegation that TDP chief Chandrababu Naidu was encouraging his party men to embrace the BJP. Referring to his role in the statehood movement, he said: "It gives me immense satisfaction that I am one among those who wholeheartedly participated in the fight for separate Telangana.

It may be mentioned here that 67-year-old Revuri who started his political career with TDP in 1983 has been with the party working in different capacities.