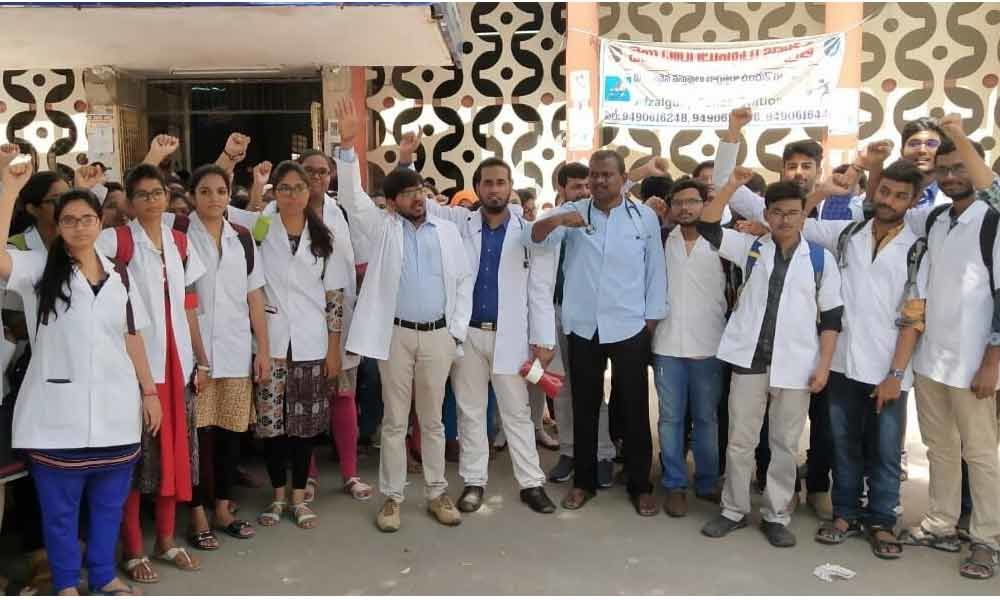 Launch protests at OGH, to boycott elective duties on Monday

Hyderabad: The government's decision to increase the retirement age of teaching faculty in government medical colleges to overcome staff shortage is being strongly opposed by junior doctors.

Doctors from different departments staged a protest in the Osmania General Hospital. While deciding to boycott elective duties on Monday, they gave a representation to this effect to the Hospital Superintendent to make alternative arrangements.

The doctors alleged that a few vested interests, who are nearing retirement, were behind this move as they want to enjoy the posts being held at present.

With retirement age increased by 7 years, such people are aspiring to continue holding top posts for another seven years, the doctors said.

According to the junior doctors, if the age hike was done, many young doctors would miss out on the opportunity to work as teaching staff in tertiary care hospitals as recruitments would slow down.

It may be recalled that the TRS government, in May 2018, took a decision to enhance the retirement age of professors from 58 to 65 years, which led to a big row with the government doctors opposing it tooth and nail.

Their contention was that extending retirement age for professors meant putting brakes on promotions of assistant professors and Associate Professors for the next seven years, thus depriving career growth opportunities for the existing faculty.

As a way out to overcome this problem, the medical fraternity proposed contract recruitment of retiring professors for a period of two to three years. Following stiff resistance from the doctors' fraternity at that time, the government put the move in cold storage.

According to officials, nearly 30 senior professors have retired or are about to retire from service in 2019 and government's proposal is to benefit all those who are set for superannuation in the latter half of this year.

T JUDA (Telangana Junior Doctors Association) members that as there were no regular recruitments and promotions, some faculty members have to work more than 10 years in the same position.

"The reason the Health Minister stated was to overcome the staff problem in new medical colleges. The solution, however, is recruitment and definitely not age hike," T JUDA chairman Dr P S Vijayender Goud said.

He said not even a single assistant professor was recruited after the formation of Telangana.