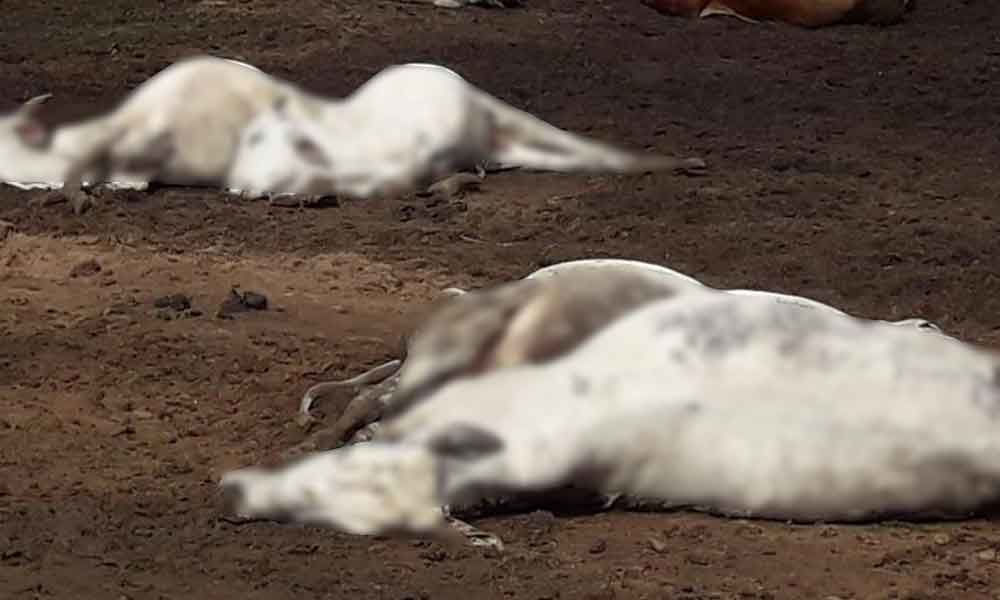 Vikarabad: Even as the world is still battling the pandemic, health and medical experts are racking their brains over remedies to new diseases that...

Vikarabad: Even as the world is still battling the pandemic, health and medical experts are racking their brains over remedies to new diseases that break out in several areas in the State. Deaths of over hundreds of animals in VIkarabad district due to an unidentified disease have now come as a bolt from the blue for the unsuspecting villagers.

Though the vaccine for Covid-19 has provided a ray of hope to the people, it seems people are panic-stricken after several of their domestic animals fell down dead due to the strange disease. A lot of animals including dogs, cows and hens have lost lives, and the reason behind this is yet to be known.

In Dornala village of Darur zone, animals were found dead on the roads after wriggling nervously because of this strange disease. The villagers of Vikarabad district are now a worried lot after noticing the deaths of more than 100 animals.

While the locals fear that it could be because of bird flu, health officials allayed their fears by telling that there was no need to panic as the news of animal deaths due to strange disease was false.

Speaking to The Hans India, Dr Sudakar Shinde, DMHO, Vikarabad, said there was no proof that the prevailing disease was bird flu and the samples were sent to the lab for testing.

He said the medical staff were busy with polio and Covid-19 vaccination and hence could not pay proper attention to this situation. "Now that the samples are sent to the lab, we shall very soon get to know the actual reason for the deaths of the animals," he added.

When contacted, the Veterinary Department also confirmed that the deaths were not due to bird flu. Dr Vasanta Kumari, District Veterinary Officer, said that samples of the birds that died in the local area were sent for testing and the reports would be out within four days.

She also claimed that no other animal had died of this disease and the news that had been spread was false. "The nearby ponds and other water bodies are often cleansed by spraying pesticides and might be the hens had consumed that water which led to their death," she explained.

She also said that the medical team had personally visited the areas where the hens had died and collected the samples and found no other animals dead. Still no certain reason can be cited as the Veterinary Department is waiting for the reports to come out.

The people of the district were in immense fear and have requested district officials to investigate the death of the hens at the earliest.