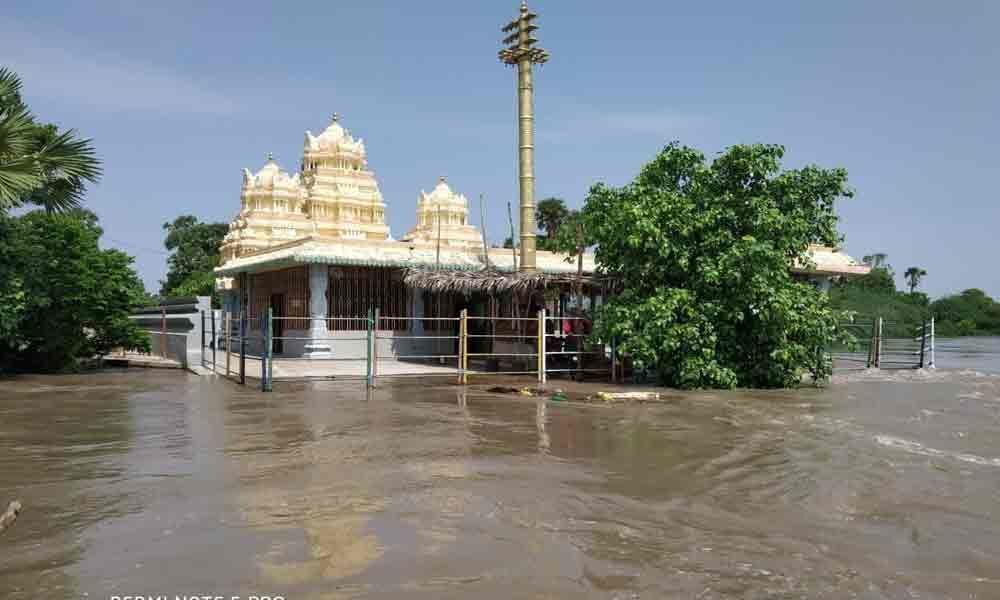 x
A Sivalayam at Penumudi village under Repalle mandal, submerged in floodwaters on Friday
Highlights

Following discharge of floodwaters from Krishna river, the island villages in Kolluru, Kollipara, Repalle and Bhattiprolu mandals of Tenali revenue division were inundated on Friday.

Guntur: Following discharge of floodwaters from Krishna river, the island villages in Kolluru, Kollipara, Repalle and Bhattiprolu mandals of Tenali revenue division were inundated on Friday. The floodwaters entered several villages and submerged agriculture and horticulture fields in these villages. A old culvert washed away between Gajurlanka and Pesarlanka at Aravinda Varadhi in Kollur mandal.

Minister Mopidevi Venkata Ramana Rao directed the officials to construct culvert immediately once the floodwaters recede. The minister and others went to Island villages in the boat. Following heavy inflows into Pulichintala Project, 7,93,664 cusecs of water was released from the project.

As a result, Pedamaddur village in Achempet mandal was waterlogged and the roads in the village under the sheet of three feet water. Road connection between Achempet and Madipadu was cut off for the last 24-hours following overflow of floodwaters on the Taduvai Bridge.

The revenue officials set up a rehabilitation camp and shifted 140 persons and supplying food and drinking water in Ramapuram under Dachepalli mandal of Guntur district. The Gurazala RDO said, "So far, we have shifted 140 persons to rehabilitation camp set up in Ramapuram. No human loss occurred due to floods so far. We have instructed the people not to venture into river for swimming. Over 9-lakh cusecs of water are expected to release from Pulichintgala Project."