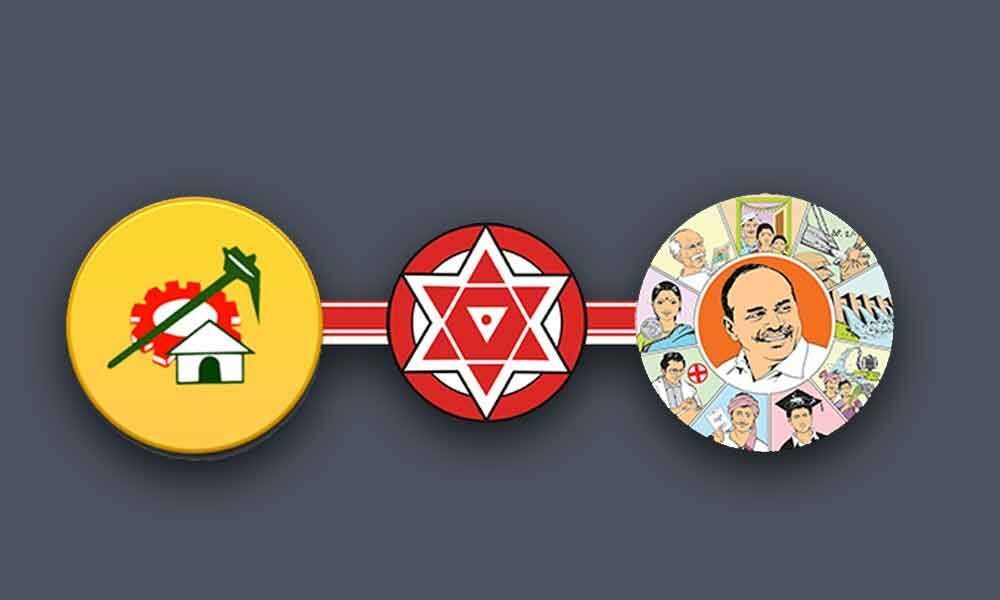 Tirupati: Jana Sena party, led by matinee idol Pawan Kalyan, has entered the political scene with a sensation in the State like PrajaRajyam party of his brother and popular film hero K Chiranjeevi.

With his entry, Pawan drew the attention of the people not only in the state and even in neighbouring states and there were speculations about his impact on the AP politics.

With his fire brand image and sharp criticism on both the ruling TDP and opposition YSRCP, there was a feeling in some sections of people that JanaSena may win considerable number of seats and may affect the winning chances of TDP and YSRCP.

But, after the counting of results, JanaSena has become a flop show by winning only one seat in East Godavari district that too with only a slender margin and even its Chief Pawan Kalyan had lost in the two constituencies he contested.

But the presence of its candidates helped YSRCP candidates to win the elections in at least about 30 constituencies in the State.

In these seats, the majority of YSRCP candidates who emerged victorious was significantly less than the votes secured by Jana Sena candidates.

In Chittoor district, out of 14 Assembly constituencies, JanaSena has contested in 11 constituencies leaving three to its ally BSP.

Among these candidates, Chadalawada Krishna Murthy of JanaSena took a sweet revenge on TDP candidate and sitting MLA M Suguna who lost with a difference of only 708 votes to YSRCP's B Karunakar Reddy.

Former MLA Chadalawada and TDP contestant Suguna belong to Balija community which is predominant in the constituency. The votes of the community people were divided between the two candidates which helped YSRCP candidate to emerge victorious.

In the remaining constituencies in the district, the JSP candidates did not show any impact. Only in Punganur and Madanapalle JanaSena candidates have secured at least some respectable number of votes.

In Punganur party candidate B Ramachandra Yadav was able to get 16,452 votes which has not made any impact as YSRCP candidate P Ramachandra Reddy won the seat comfortably with 43,555 votes against TDP's N Anesha Reddy.

G Swathi of JanaSenagot 14,601 votes in Madanapalle where YSRCP's M Nawaz Basha got 29,648 votes majority on TDP's D Ramesh. It may be noted that Swathi's husband G Ramdas Chowdary had aspired TDP ticket.

But the party chief N Chandrababu Naidu had chosen former MLA D Ramesh. Disappointed Ramdas joined JanaSena and fielded his wife as its candidate there. If he had continued in TDP, it would have made a big difference there.

JanaSena candidate Dr M Venkataramana got only 1,879 votes which are less than NOTA (2,905) in Kuppamconstituency where TDP chief Chandrababu Naidu has won.