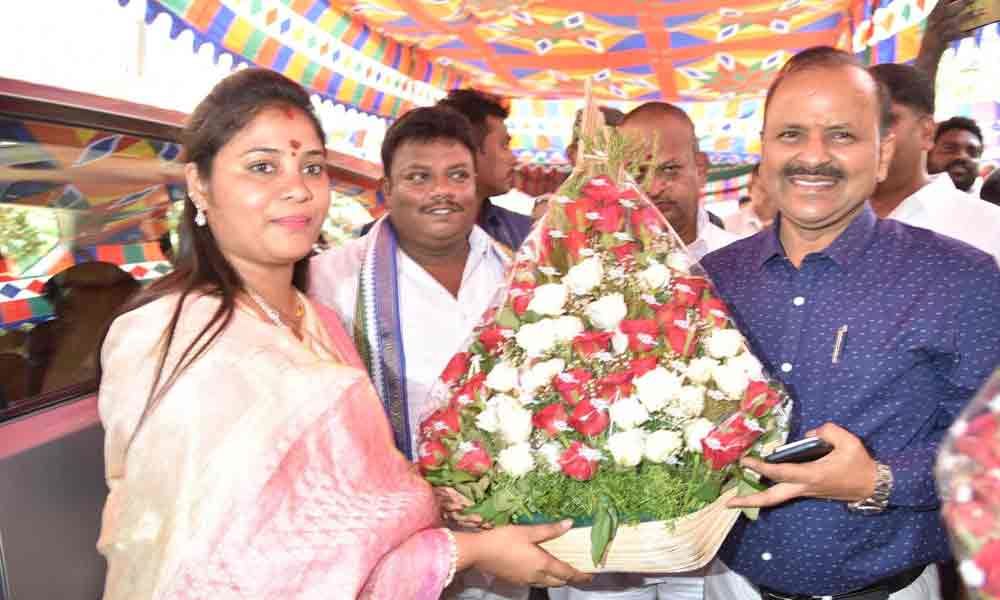 Deputy Chief Minister P Pushpa Srivani on Saturday got rousing reception during her maiden visit to the district after taking charge as minister.

Vizianagaram: Deputy Chief Minister P Pushpa Srivani on Saturday got rousing reception during her maiden visit to the district after taking charge as minister. When she reached Vizianagaram, a huge number of leaders and cadre including MLAs B Appala Narasaiah, A Jogarao, K Veerabhadra Swamy, P Rajanna Dora welcomed her. Later she was greeted by Collector M Hari Jawaharlal and other bureaucrats at the collectorate.

Speaking on the occasion, she told that corruption-free governance is the motto of the government and they would provide hassle-free service to all sections of people. "We are going to reach every family with 'Nava Rathnalu' and every individual would be taken care by the government. The public need not pay any bribes to officers to do any official favour.

Tribal welfare in remote areas is our top priority and will do every possible help to them with the blessings of Chief Minister Y S Jaganmohan Reddy. I will take the issue of making Parvathipuram as a district headquarter to the notice of the Chief Minister and will work hard to fulfill the wish of people."

The salaries of community health workers also would be raised soon, she said. Speaking on the boiler blast incident that took place at Bobbili, she said that the government would pay Rs 5 lakh and the Balaji chemicals firm would pay Rs 15 lakh to each deceased family member.

Raithu Bharosa scheme would be implemented from October 15 and every farmer would get the support of Rs 12,500 per acre, she said and added even free borewells also will be sanctioned. Every year we will build 5 lakh houses for weaker sections and welfare schemes will be delivered at the doorsteps of beneficiaries. Amma Odi scheme would help the poor families to educate their children without financial burden, she said.