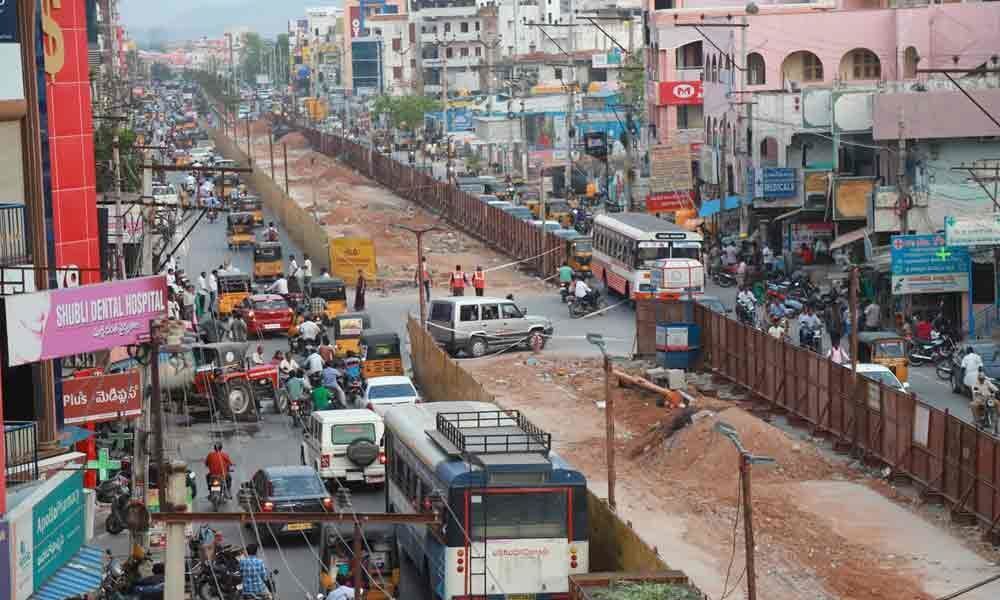 The ongoing works on the 6-km long elevated expressway are creating traffic jams in peak hours every day in pilgrim city.

Tirupati: The ongoing works on the 6-km long elevated expressway are creating traffic jams in peak hours every day in pilgrim city. The Rs 624 crore project taken up jointly by TTD and Municipal Corporation of Tirupati (MCT) to ease traffic on city roads. It is likely to be completed in the next two years if the works continue as per schedule.

However, the works have begun without providing alternative routes to commuters. Especially, they are facing traffic hurdles for the last one month at Padmavathipuram Circle, Srinivasa Kalyanamandapam, Lakshmipuram and Ramanuja circles. All the pilgrim vehicles which are coming from Chennai, Bengaluru and Vijayawada are heading Tirumala via Tiruchanur-Tirupati road.

But, major portion of flyover construction works are going on in between Ramanuja Circle and Srinivasa Kalyanamandapam Junction. Locals, who are residing in localities like Tiruchanur, Yogimallavaram, Vaishnavi Nagar, Tanapalli, Padipeta and Daminedu are forced to travel in a narrow road due to flyover works.

To ease traffic congestion, Urban SP KKN Anburajan has directed the traffic police to coordinate with MCT officials. Traffic cops have planned to divert the vehicles in alternative routes to resolve the traffic jams.

DSP (Traffic) D Muralidhar Reddy has divided Tirupati into six zones and allotted one SI/ASI rank officer along with a constable and a home guard in the name of white colts to regulate the traffic from 9 am to 1 pm and 4.30 pm to 9 pm.