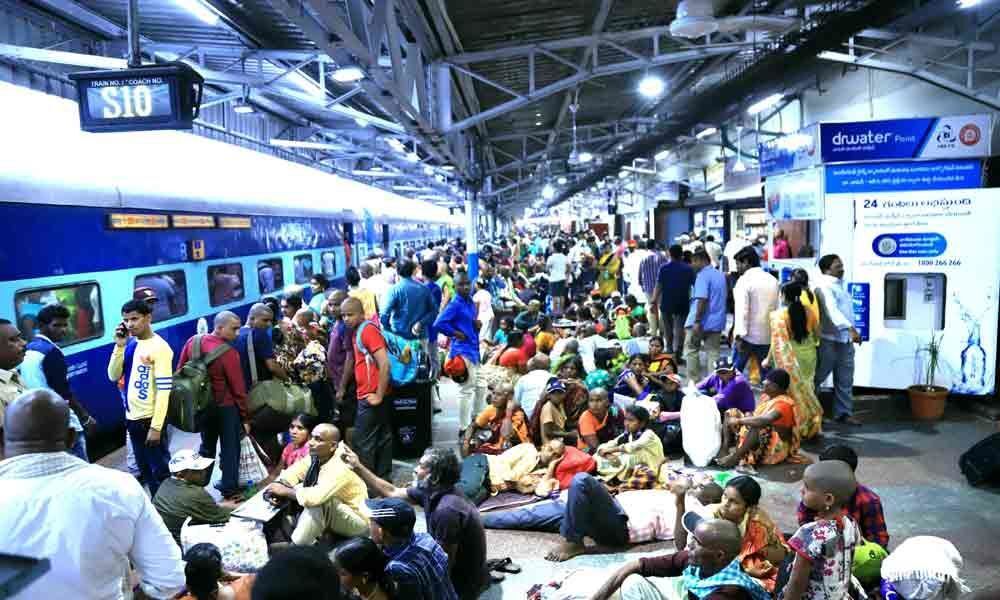 Pilgrims are flooding to Tirupati to worship Lord Venkateswara at Tirumala resulting in huge rush at the railway station.

Tirupati: Pilgrims are flooding to Tirupati to worship Lord Venkateswara at Tirumala resulting in huge rush at the railway station. The influx of passengers was increasing during the last 10 days and the officials expect the trend will continue for another 10 days. With overcrowded and congested platforms, passengers find it difficult even to stand and move from one place to another.

All the trains running through the station have been witnessing heavy rush and it becomes Herculean task to board general compartments. Most of the long-distance trains are having huge waiting list in reserved compartments forcing the passengers to wait and try their luck in general compartments making them to stand in long queue lines to buy tickets.

During the normal days the average flow of passengers was estimated at 60000 per day whereas during this peak period, the number goes to almost 80,000. This fetches the railways an income of more than Rs.30 lakhs per day only through the sale of general category tickets while it might be around Rs.20-25 lakhs in the normal period.

Altogether five booking counters were being operated at two different places to sell general tickets, all of them are looking busy always. South Central Railway Authorities have been running two weekly special trains to Aurangabad and Kakinada and another train to Secunderabad which runs twice in a week. However, there was no much publicity about these trains as nowhere the information about them was displayed. However, these trains could not meet the requirements of the passengers who were facing huge inconvenience.

Meanwhile, the passengers were being fleeced at the toilets, which several passengers have been complaining. Also, there were complaints on food quality being served at the outlets on the platform. Passengers said that the food was not properly cooked and was not fit to eat. While, the visiting railway officials have said many a time that the stalls on the platform can sell any brand of water bottle along with the own brand of Railways called Rail Neer, except that no other brand was available in Tirupati station.

Also, several passengers were saying that they could not even buy a newspaper or magazine at the Railway station as there was no stall in the station complex. The shop was being closed by the Railway Commercial Department authorities after the licensee was unable to pay the massive hike in the fee as they insist him to convert it into multipurpose stall. The licensee was saying that the license fee was unusually increased by 1700 per cent by the Railway Board, which he could not pay and asked for a reasonable revision.