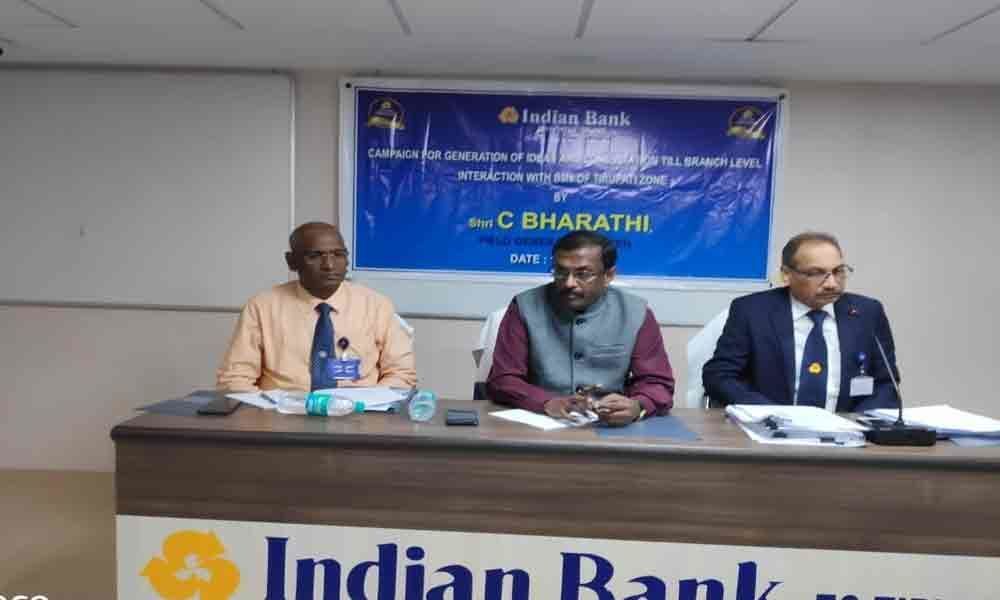 In an effort to boost up its business, the public sector Indian Bank held a zonal-level meeting here on Sunday for consultation from branch-level.

Tirupati: In an effort to boost up its business, the public sector Indian Bank held a zonal-level meeting here on Sunday for consultation from branch-level. In all, officials from 78 branches in the zone comprising five districts participated in the meeting.

Speaking to media after the meeting, Chief General Manager (AP, Telangana and Karnataka) C Bharathi said that the consultative meeting has been proposed in all zones to generate innovative ideas and out of box thinking on various banking related issues so that the banking sector effectively participates in taking the nation to $ 5 trillion in economy.

The Bank's top management have moved to various places in the country to have deliberations with branch managers, he said, adding that this will be followed by State-level meeting of the Bank in August last week and national-level meet in September.

He mentioned detailed discussions were held on bank's lending to MSME sector including Stand-up-India, MUDRA loans and also bank lending to agriculture and SHGs for self-employment of women.

Other areas like retail lending, digital transaction for both convenience and outreach were also touched upon, he added. Bharathi said a State-level report after the zonal meetings will be sent for discussion in the national-level meeting of all banks for finalising a road map for making the banking sector vibrant to play its crucial role in boosting business to achieve the five trillion-dollar economy. Zonal Manager M Prabhakar Reddy and Deputy General Manager R Srinivasa Rao were also present.