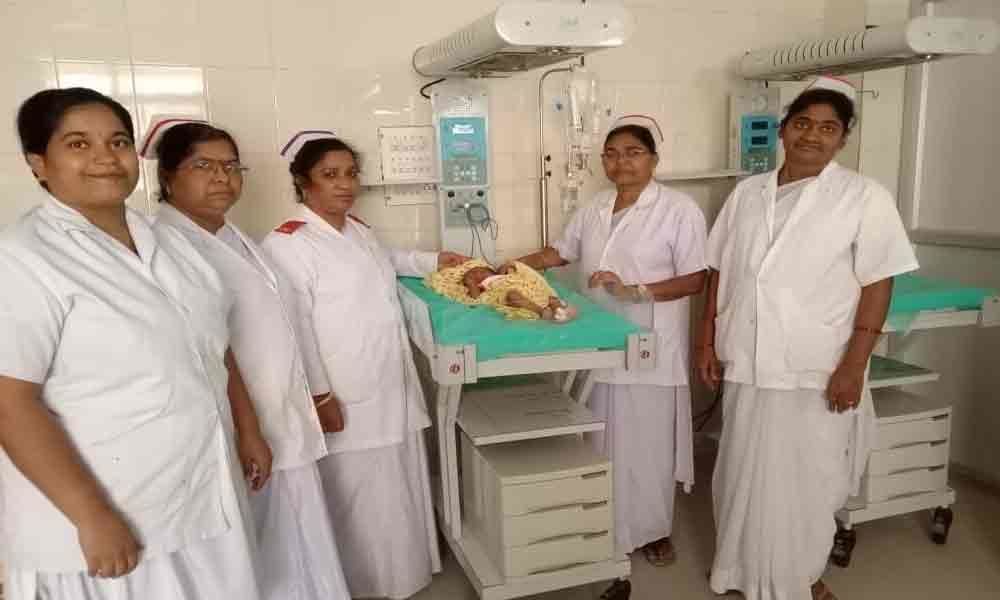 The nurses working in public, private, corporate hospitals and PHCs in the Prakasam district celebrated the International Nurses Day on Sunday

Ongole: The nurses working in public, private, corporate hospitals and PHCs in the Prakasam district celebrated the International Nurses Day on Sunday, marking the birth anniversary of the founder of modern nursing and also the Lady with the Lamp, Florence Nightingale.

The International Council of Nurses first proposed the nurses day in 1953 but celebrated it officially from 1965 on the birthday of Nightingale. Nightingale was the person who laid the foundation of professional nursing with the establishment of her nursing school at St Thomas' Hospital in 1860, which was part of King's Hospital now in London. Since 1974, the International Nurses Day was being observed all over the world, highlighting the importance of nurse's role in providing the best health care services.

As the nurses are a vital access point to round the clock emergency and ongoing care from birth to death, the International Council of Nurses announced the theme for 2019 as 'Nurses: A Voice to Lead, Health for All'.

The nursing superintendent at Markapuram District Government General Hospital Shaik Neelu Farzan said that the nurses' community in the state was delivering best services to public irrespective of the caste and creed, but are not receiving any recognition. Another nurse Pirla Mahalakshmi said that the nurses are serving people with long term illnesses more than their family members, just because they are chosen the service as a career.

D Elizabeth, P Venkateswaramma, Krishna Kumari, Kamala Kumari, Prameela, Manikyam and other nurses said that though nurses are rendering their part of the duty without compromise, the government was falling behind in delivering its promises. The nurses demanded the government to regularise the contract nurse take up regular recruitment and fulfil the vacancies with permanent staff.

On this International Nurses Day, the nurses in the district announced that they are committed to the Nightingale pledge, they made while entering the profession and they do not deviate from it.