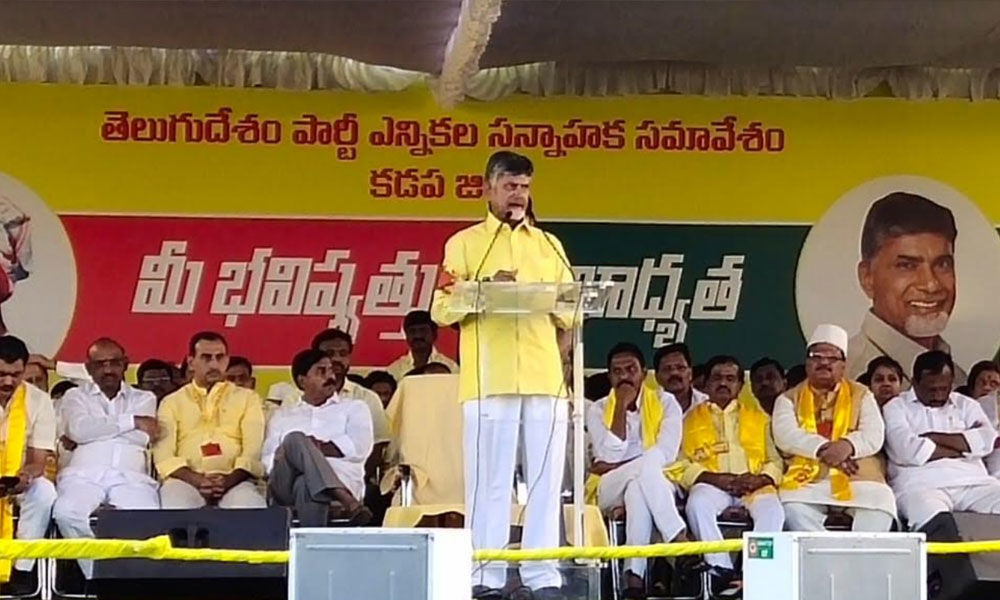 While describing YS Jagan Mohan Reddy as notorious criminal, chief minister N.Chandra Babu naidu urged the people not to franchise their vote in favor of YSR congress as they may have tasted bitter rule if committed such mistake.

Kadapa : While describing YS Jagan Mohan Reddy as notorious criminal, chief minister N.Chandra Babu naidu urged the people not to franchise their vote in favor of YSR congress as they may have tasted bitter rule if committed such mistake.

As part of electioneering at Kadapa here on Tuesday he alleged that Jagan Mohan Reddy was responsible in encouraging several crimes by making Pulivendula as center point. The TDP president recalled that as many as 150 TDP functionaries including Paritala RAvindra were killed during the regime of YS Rajasekhar Reddy in 2004. Chandra Babu naidu stated he never encouraged murder political as his ruled the state in democratic manner.

He said that Vivekananda Reddy murder was occurred with the complete knowledge of his family members under guidance of YS Jagan Mohan Reddy. The chief minister questioned if the family members were innocent in the murder incident of Vivekananda Reddy why they have adopted double standards over the issue like Vivekananda Reddy was died of cardiac arrest later around 9.30PM he alleged it as murder. He also pointed out what is the necessary for them to covered the injuries with switchers later with bandage instead of handed over it to the police.

The chief minister alleged that Vivekananda Reddy family members fails to extend the the cooperation to the investigation agencies instead trying hide the evidences. Finding fault with the Jagan Mohan Reddy for submitting letter to the Governor over the issue, Chandra Babu naidu said he is trying to escape from the murder case by demanding CBI probe like Kodi-Kathi incident.

Saying that emerging TDP to power is a historical need chief minister said TDP government was responsible for bring Krishna waters to Kadapa district through Gandikota lift irrigation scheme and the storage capacity of Gandikota reservoir was increased to 12tmc's. He recalled that despite people of Kadapa were fails to franchise their vote in favor TDP in 2014 elections, but government extended all support by initiating several developmental activities like supplying water to Pulivendula constituency through Chitravathi Balancing Reservoir, starting second phase of Galeru Nagari Sujala Sravanthi, laying foundation stone for Rayala Seema power plant, bring 16plus big industries, making Kadapa as horticulture hub etc despite government is facing severe financial hurdles.

He said it is unfortunate for people of Kadapa is having such a criminal continuing in the politics as he is hatched conspiracy to destabilize the government under the guidance of Narendra Modi , K.Chandra Sekhar instead extending support for the state development as opposition leader.

He said that Narendra modi has no moral right to continue as prime minister as he was responsible for destroying credibility of independent agencies like ED, CBI, RBI etc resulted the integrity of the nation at cross roads. He said BJP lead NDA government failed to implement the assurances mentioned AP Reorganizing act.

Chandra Babu naidu urged the people to extend their support to the TDP for continuation of developmental activities by providing victory to the contestants in ensuing elections.