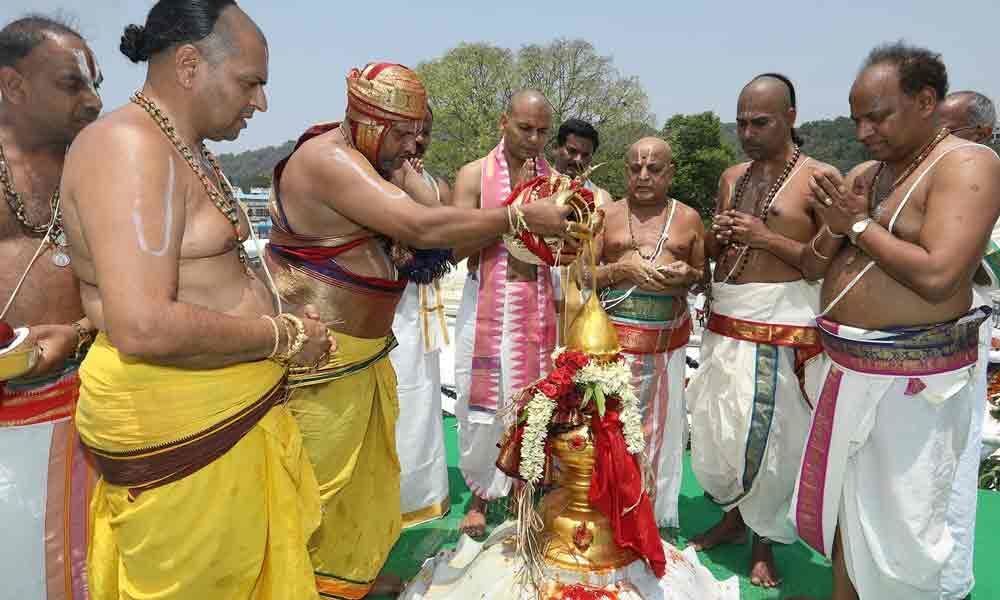 The Agama ritual, Astabandhana Balalaya Maha Samprokshanam wasobserved in Sri Varaha Swamy temple on Saturday in the auspicious Karkatakalagnam between 11.07 am and 1.16 pm in Tirumala.

Tirumala: The Agama ritual, Astabandhana Balalaya Maha Samprokshanam wasobserved in Sri Varaha Swamy temple on Saturday in the auspicious Karkatakalagnam between 11.07 am and 1.16 pm in Tirumala.

The team of Ritwiks, temple priests, Agama advisors, led by chief priest of Tirumala temple VenugopalaDeekshitulu, performed series ofevents by chanting mantras and transferred the divine power back into the deities and Vimana Gopuram. When they wereperforming Mahasamprokshanam to Vimanam, the priests chanted slokas toinvoke the four deities residing in Vimanam.

After invoking the deities from Kumbham to Bimbam, the priests recitedsubsequent mantras pertaining to other 24 deities (Avarana Devatas)residing in the premises of the temple, said the chief priest. He alsosaid special pujas were performed to deities in 12 jeevasthanams and48 kalas and later Naivedyam has been rendered to all the deities.

The TTD has renovated the temple giving a new look to the Varaha Swamy temple after Kalakarshana on April 23 night.As a part of the renovation, three Makara Toranams with gold coating were set to the sub-temples of Sri Ramanujacharya, SriVishwaksenulavaru and Sri Pushkarini Anjaneya Swamy at a cost of Rs.7 lakhs.

Later in the night the procession of Sri Varaha Swamy was carried out fromthe temple covering four Mada streets between 7pm and 9pm.After completion of the ritual, darshan which was suspended since 23rdof this month for performing of MahaSamprokshanam, resumed.

TTD EO Anil Kumar Singhal said to media persons that the MahaSamprokshanam in Sri Varaha Swamy temple was done now after 1982."Blessed to be a part in this unique and rare ritual", he said.

Later he said, the measurements for gold plating for Vimana Gopuramhave also been taken and lauded all the engineering officialsfor their efforts to give new look to the ancient temple and thankedall the Acharya Purushas who performed the ritual. Tirumala JEO KS Sreenivasa Raju, CVSO Gopinath Jatti, Temple Dy E O Harindranath and other officials were present.