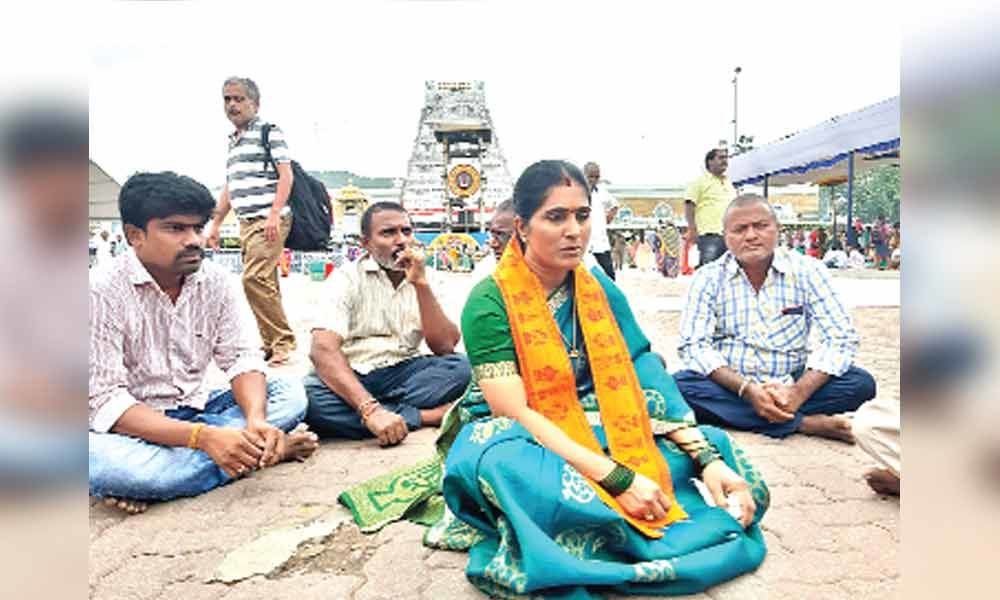 Jyothirmayi, along with a group of her associates, began her Dhyanam silently chanting Sri Venkateswara mantram at 3 pm and continued it for seven hours to insist on appointing only those who are devout and service-minded in the board.

The singer's novel protest over dominance of politicians assumes significance as it was observed even as the YSR Congress government issued orders appointing a new chairman for TTD trust board.

Earlier, addressing media, Jyothirmayi, made it clear that she was not against appointment of politicians as trust board members but only keen on confining their number to three as per the TTD Act which permits the government nominate three MLAs as trust board member and wanted all the remaining members should be from various walks of life like teachers, farmers, social activists, etc., with clean image and full of service motive to see that there is no dominance of politicians in the religious body.

She said that she has been asking the successive governments to avoid dominance of politicians in TTD board for the last 15 year but in vain. "It is not the demand of me along but the aspiration of lakhs of people including devotees, swamjis and common pilgrims who are earnestly wishing the TTD trust board remain free of political dominance.

The successive governments have not limited the number of politicians to three and appointing more number of them," she added.

In this connection, she said that before the election she met YSRCP chief Y S Jagan Mohan Reddy to echo the aspirations of the devotees with regard to constitution of new TTD trust board and also her demand and claimed that Jagan responded positively. She said she tried to meet him after he become Chief Minister on this issue but could not get his appointment.

Many swamijis who she met also lent their support to her efforts to keep TTD trust board free of politicians' dominance, she claimed.