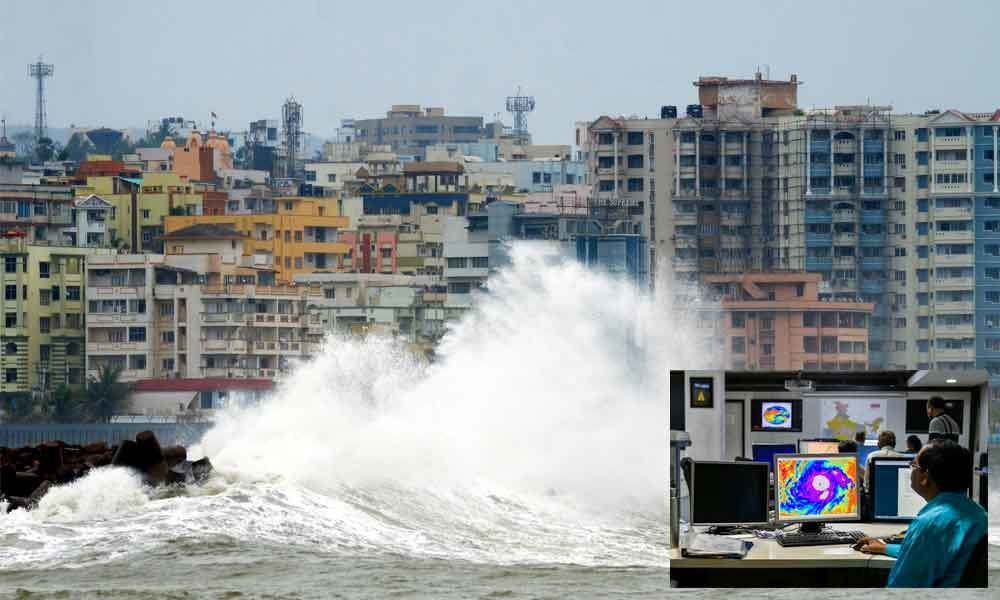 Visakhapatnam: Fani cyclone, which is expected to be India's strongest landfalling tropical cyclone in the last five years, is barrelling towards the east coast.

It lay centred about 285 km south-southwest of Puri and 160 km east-southeast of Visakhapatnam.

It is expected to make a landfall in Odisha state on Friday around 11 am. Already strong winds and rains are being experienced in many places in Odisha, Visakhapatnam, Srikakulam and Vizianagaram.

Fani is expected to bring large storm surges and significant wind damage near the landfall location. Inland flooding will also be a major threat.

Portions of eastern India and Bangladesh can expect 150 mm to 300 mm (6 inches to 12 inches) of rain with locally higher amounts regardless of the intensity.

Officials have taken up the work of evacuation of large number of people to cyclone shelters.

A red alert has been sounded in Srikakulam district.

According to local fishermen, the sea water has turned into red colour which indicates that the impact of the cyclone would be very heavy.

Gales of 140 kmph are expected. As a precautionary measure 126 relief camps have been opened in Srikakulam and nearly 50,000 people have been shifted to these camps in 15 affected mandals.

Five mandals, Itchapuram, Kaviti, Kanchili, Sompeta and Vajrapukotturu are likely to be the worst-affected areas. The adjoining Vizianagaram district is expected to witness gales with a speed of 90-100 kmph, according to weather department.

Government has shifted 2000 people to cyclone centres in this district.

Therlam received 17mm and Merakamudidam 14mm of rain. The district officials alerted people living in villages on the banks of Nagavali and Vamsadhara rivers as Odisha has started releasing water into these rivers.

As the sea condition is likely to be very rough with tidal waves of 1.5 metres, authorities have advised fishermen not to venture into sea.

A special officer was appointed for each 'mandal' as about 200 villages are likely to be affected by the cyclone, the officials have taken measures to prevent the loss of life.

The railways deputed officers at major railway stations in Vijayawada division to help the stranded passengers in view of the disruption in train movement.

South Central Railway Vijayawada Division manager P Srinivas said that helplines have been opened at all major railway stations to assist the passengers.

Around 95 trains have been cancelled in the last two days.The national transporter said it will grant full refund to passengers for the cancelled or diverted trains if tickets are produced for cancellation within three days from the scheduled date of journey.

The Railways had cancelled 81 trains on Wednesday. The trains which have been cancelled include the Howrah-Chennai Central Coromandal Express, Patna-Eranakulam Express, New Delhi-Bhubaneswar Rajdhani Express, Howrah-Hyderabad East Coast Express and the Bhubaneswar-Rameswaram Express.

These include the Bhubaneswar-New Delhi Rajdhani Express and the Puri-New Delhi Nandan Kanan Express.

While the Prime Minister Narendra Modi reviewed the situation with the union cabinet secretary, Union Minister for civil aviation Suresh Prabhu directed all airlines to offer assistance for rescue and relief operations.

He has also ordered that relief material be airlifted to be delivered to officially-designated agencies.

Coast Guard East: We have positioned 8 rescue teams, 4 each at Visakhapatnam and Chennai.

We have also kept 2 ships each at Visakhapatnam and Chennai for immediate mobilisation post-cyclone.

One Chetak helicopter, each at Chennai and Visakhapatnam is kept ready to provide relief.