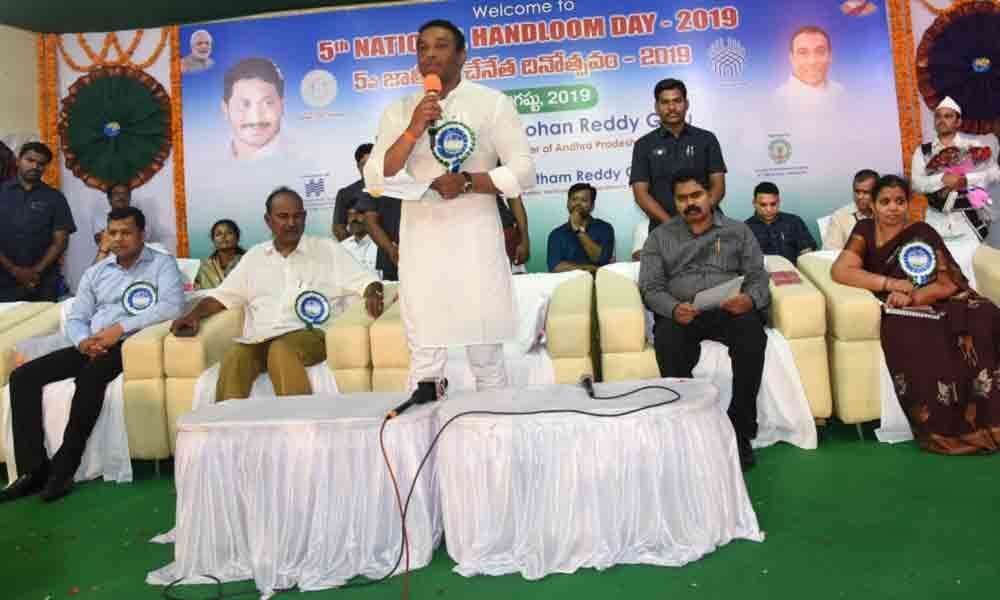 Industries Minister says the govt to provide support of Rs 24,000 to each weaver family.

State govt allocated Rs 200 crore in the budget for the welfare of weavers.

Nellore: IT and Industries Minister Mekapati Goutham Reddy announced that the government will conduct a special grievance day in the district for every two months for resolving the problems of weavers.

Participating in National Handloom Day celebrations at a private function hall in Sangam on Wednesday, he said Andhra Pradesh stands in second position after Tamil Nadu in manufacturing handloom products across the country.

"We will set up a skill development centre to hone skills among weavers in the sector. We will also provide identity cards to weavers for participating in any exhibitions and for marketing their produce," said the Minister.

He recalled that handloom products from the State had got worldwide recognition.

Secretary of Department of Handlooms and Textiles, I Srinivasa Srinaresh said that weaver families were concentrated in Dharmavaram, Pochampalli, Venkatagiri, Kadapa, Uppada, and Konduru in the State. Normally, the National Handloom Day would be conducted at Mangalagiri and this is the first time the Day being conducted in Sangam mandal in Nellore district, he pointed out.

Collector MV Seshagiri Babu said there were 6,000-7,000 families in the district who rely on handlooms. The district administration would focus on resolving the issues of weavers and measures would be taken to arrange a special cell, he added.

The Minister felicitated handloom weaver K Mallikarjuna, who received President's Award in 1996. The Minister also inaugurated a health centre in Sangam which has been constructed with Rs 2.26 crore.