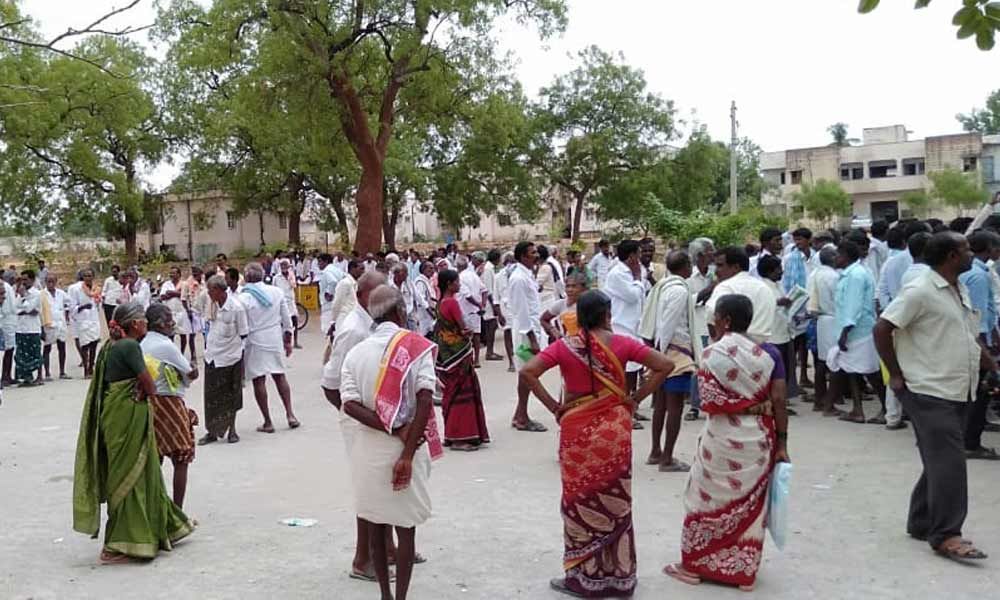 Tension prevailed at lakkireddy palli police station with the farmers in large numbers tried to attack the agriculture department officials finding fault with them of their failure in distributing the ground nut seeds in transparent manner.

Kadapa: Tension prevailed at lakkireddy palli police station with the farmers in large numbers tried to attack the agriculture department officials finding fault with them of their failure in distributing the ground nut seeds in transparent manner. After the situation went out of hands agriculture officials ran for their life by hiding in to the police station. Once in a stage the agitators even tried to attack the Assistant Sub-Sub inspector as he restricted them to gain in the police station. Later the agitators blacked the road at YSR Circle in the town leads traffic jammed more than one hour.

According to the sources the agriculture department has planned to distribute the ground nut seeds for current Kharief season to the farmers at lakki Reddy palli police station on Monday. Following announcement made by agriculture department over distribution of ground nut seeds farmers in large numbers from Pandilla Palli, Karnuthalapalli, Kasturirajugari palli, Dappepalli etc 10 villages from Lakki Reddy palli mandal queued since early hours. However the officials begins the seed distribution after 10AM closed it in the afternoon following stock was over.

This was lead unrest among the farmers as they entered heat exchange with the officials alleging them they have shown discrimination in distributing the seeds. The farmers alleged that agriculture department officials were responsible in shifting shifting ground nut to the black market by drawing through fake pass books. They also alleged that officials provided the ground nut seeds to the fake pass book holders as they bowed to pressure from the local TDP leaders. However farmers withdrawn their protest after the agriculture department officials reached to the spot assured distributing seeds for eligible beneficiaries as 1000 Quintals of ground nut reaching the district within two days.