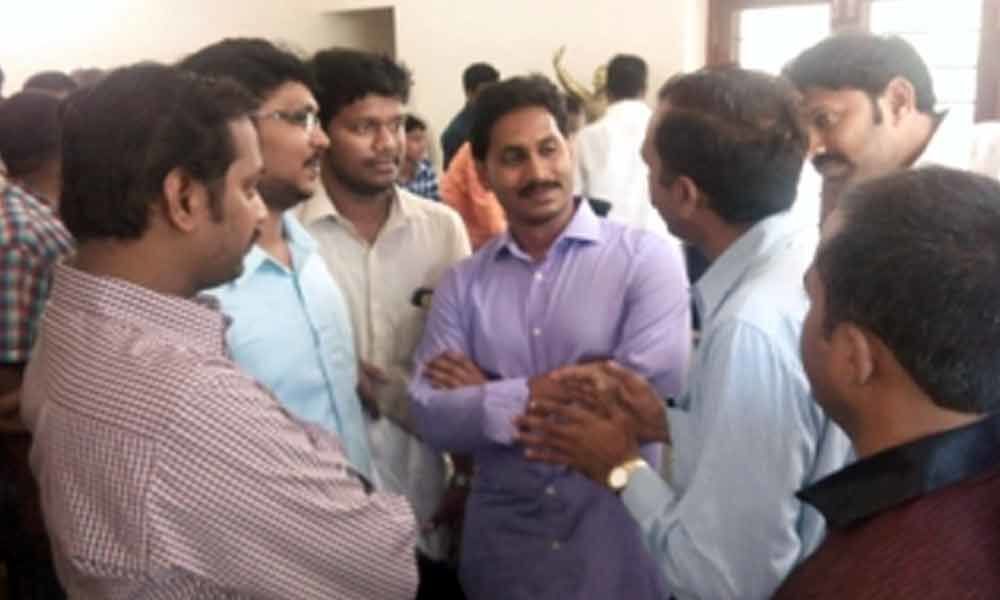 Kadapa: As part of his 3 day visit in Kadapa district YSR congress president YS Jagan Mohan Reddy has conducted Praja darbar at party office in Pulivendula town on Wednesday. The YCP chief who reached Pulivendula town around 11AM stayed in the party office till evening accepted representations from the public.

People from surrounding areas thronged to Prajadarbar lodged complaints on various issues like land disputes, drinking water problem, NREGS works, pensions, delay taking place in releasing water for agriculture operations in the current crop season, compensation to the crops which were destroyed due to recent untimely rains. Meanwhile employees working under Rural Child Health Mission (RCHM) in the blood bank division of all government hospitals met Jagan Mohan Reddy and submitted representation. In the representation they detailed that 230 lab technicians, 105 helpers, 32 staff nurses are in working RCHM as contract employees from 2006 in all government hospitals in the state. They said they are not being paid salaries for the last 6 months. They also appealed him to regularize their jobs.

Speaking the occasion Jagan Mohan Reddy alleged that TDP government has no clarity over the development of the state as that party leaders always concentrating how to loot the public money. He assured them to ensure of regularizing their jobs immediately after his party voted to power in the state. On this occasion Jagan Mohan Reddy met the party contestants and reviewed the political situation. Party leaders Avinash REddy, P.Ravindranath Reddy, Amjad Basha , S.Raghurami Reddy and others were present.