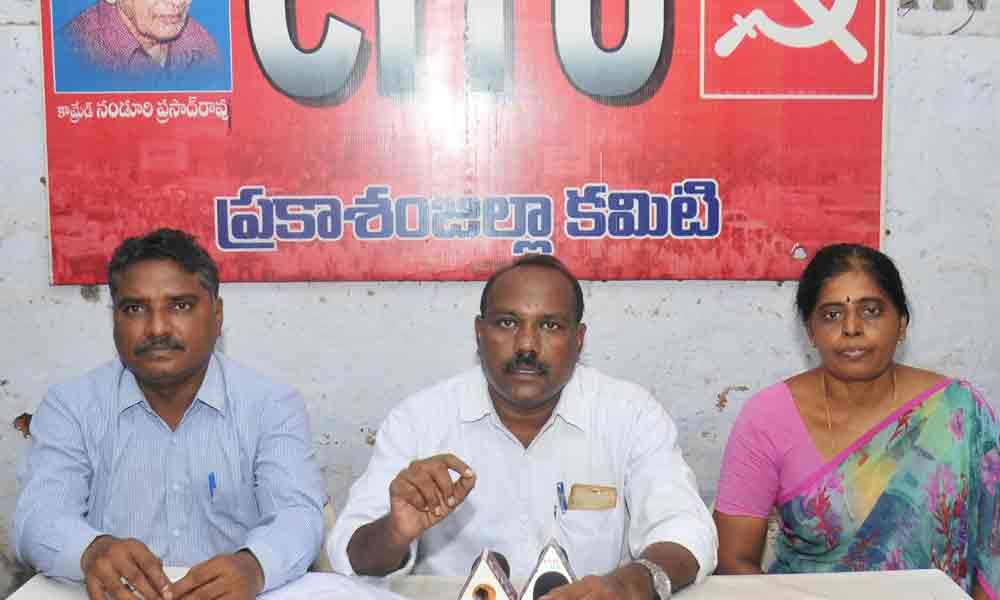 The Centre of Indian Trade Unions Prakasam district unit demanded that the state government protect the jobs of people already working in various schemes in the state.

Ongole: The Centre of Indian Trade Unions Prakasam district unit demanded that the state government protect the jobs of people already working in various schemes in the state.

The CITU district secretary, Chikati Srinivasa Rao and other leaders thanked the government for increasing salaries of few workers but advised it not to take hasty decision to award the schemes to others without discussing the ill-effects of the decisions.

He also demanded that Chief Minister Jaganmohan Reddy keep his word of offering equal pay to equal work as per the Supreme Court orders to the outsourcing workers. He also demanded that the government should not give mid-day meals programme to ISKCON-run Akshaya Patra. He said that the foundation was caught by the vigilance department in Vizag while trying to sell the ration rice provided for the mid-day meal of poor children.

He mentioned that the contract and outsourcing jobs have become a type of slavery and the employees are not getting a decent salary even after working for 20 years when compared to others. He said that there are about 15 lakh workers in the unorganised sector in the district and see their minimum salaries are revised and implemented in full spirit.