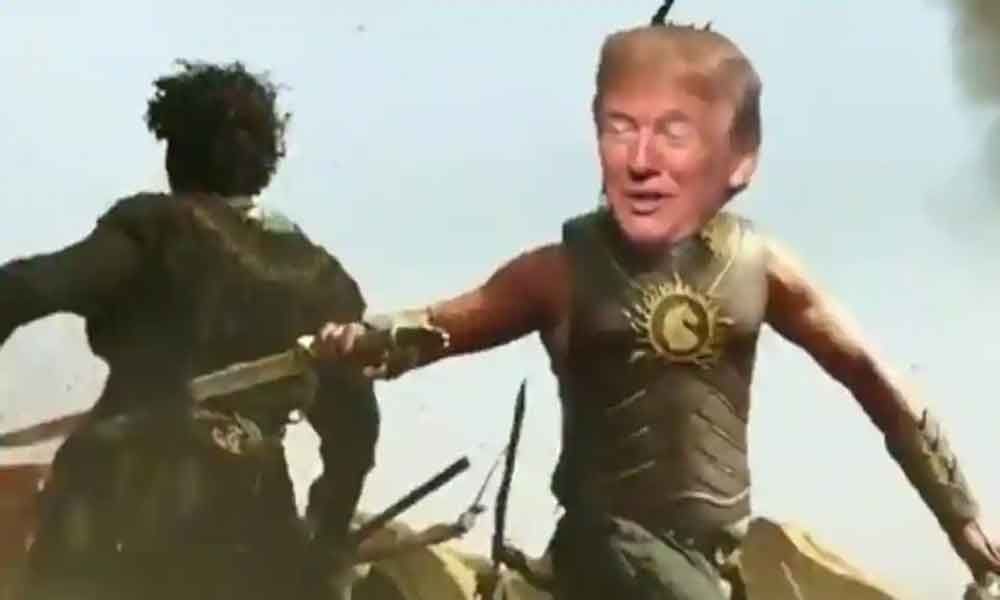 That Baahubali was not only a famous pan India movie but also an equally successful commercial venture is well known.

That Baahubali was not only a famous pan India movie but also an equally successful commercial venture is well known. The film directed by SS Rajamouli is discussed to this day across industries and finds a reference in movies of different languages.

The movie features Prabhas, Anushka Shetty, Tamannaah Bhatia, Ramya Krishnan and Nazir in key roles. The legend of Baahubali needs no introduction. From time to time we see celebrities sharing spoofs of the Baahubali video. But could you even imagine someone like US President too has a hang of it?

Before boarding his flight, President Trump has shared a video of him in the body of Prabhas the lead hero in Baahubali. The video has gone viral and caught netizens by surprise. Even an Indian leader hasn't done anything like this. This is amusing. Check out the video ..

Look so forward to being with my great friends in INDIA! https://t.co/1jdk3AW6fG

We now wonder if Trump too has been bitten by the Baahubali bug. Has he watched the movie or is he a fan of Prabhas? What does he think of Indian movies?

President Trump is all set to visit visit. He will now be on a charter flight on his way. After he touches down upon the nation, he is expected to meet Indian Prime Minister Narendra Modi before visiting the famous Taj Mahal with Melania Trump. He is also expected to visit Mahatma Gandhi's Sabarmati Ashram in Ahmedabad.

So excited is he about India that he has been making a lot of statements before his arrival to set the stage.