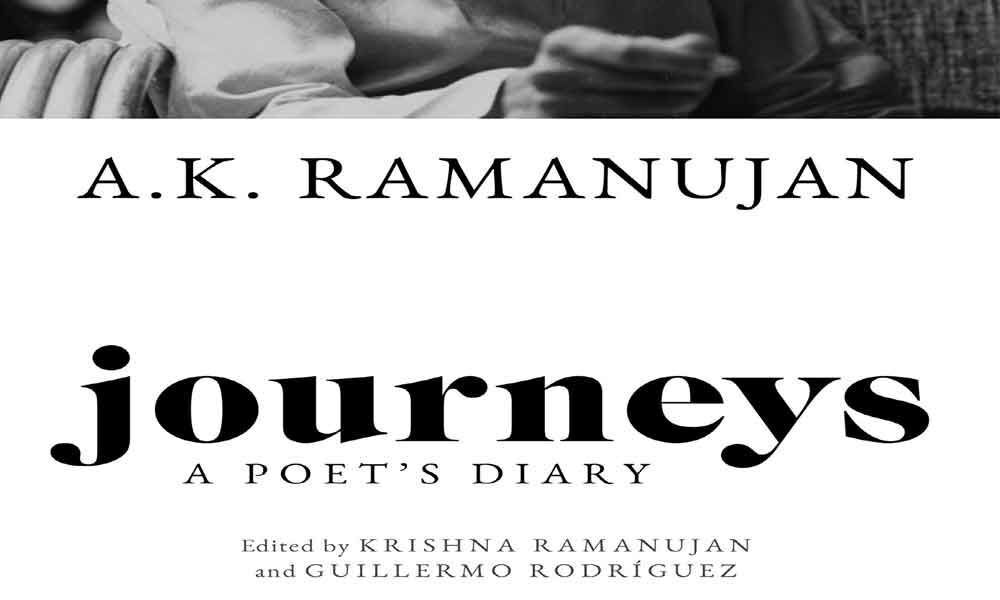 The hitherto unpublished personal diaries and journals of late poet-scholar AK Ramanujan, who wrote in both English and Kannada, have been published as a book.

The hitherto unpublished personal diaries and journals of late poet-scholar AK Ramanujan, who wrote in both English and Kannada, have been published as a book.

Edited by his son Krishna Ramanujan and Guillermo Rodriguez, an active promoter of Indo-Spanish cultural relations, the book 'Journeys: A Poet's Diary' will be out this week.

It includes accounts from his travels, his thoughts on writing, many improvised as well as early poetry drafts, and dreams.

As per the introduction penned by Rodriguez, the book brings together for the first time a selection of the unpublished diaries and journals that trace Ramanujan's 'journey' - in his own voice - as a writer and poet, and his maturing as a unique intellectual luminary.

The journey moves from his first literary steps as a budding poet in the 1940s in then Mysore (Mysuru); his years as a professor of English literature in India in the 1950s, to his landmark passage to America as a Fulbright scholar in 1959.

In the 1960s, he began his successful career as a Dravidian scholar at the University of Chicago and published his first poetry collection and book of translations.

By the 1980s and early 1990s, the darker period in his poetry, a time of personal and inner struggle re-emerged: his frequent despair and physical pain came to the fore in his fragmented writings. He died in 1993.

Apart from his literary treasures like the translations of ancient Tamil and medieval Kannada poetry, as well as of UR Anantha Murthy's novel 'Samskara', his personal literature – journals, diaries, notes -- remain largely unknown.

'Journeys: A Poet's Diary', published by Penguin, complete with a foreword by renowned film-theatre personality Girish Karnad, now opens a window to the author's innermost thoughts and his creative process.