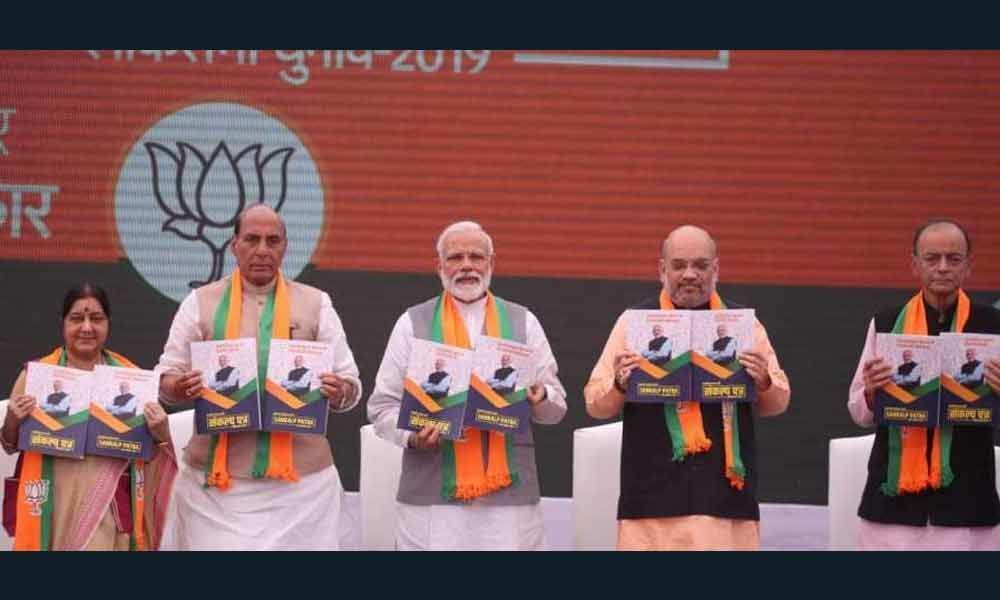 Prime Minister Narendra Modi released the BJP's poll manifesto that promises plenty to develop almost every sector inside the democratic country. Some of the promises such as ensuring urban development, constructing roads at an unprecedented pace, corruption free Bharat, ease of doing business, connecting gram panchayats with high speed optical fibre network etc., are mostly related to technology and economy.

However, the manifest miserably failed in promising social justice and turned a blind eye towards Dalits, Adivasis and other backward castes as if there is no issue to address at the current hour.

This is most shocking and astonishing that in a country like India, there are many key issues that has to be addressed and there is utter silence towards such issues in the BJP's manifesto.

The BJP failed to understand that along with the party's promise to make India as the world's 3rd largest economy, the country's strength lies in protecting social justice and self-respect of every community which keeps the country in harmony.

In 1999, the BJP under Atal Bihari Vajpayee made a decision in protecting the oppressed classes and promised to safeguard the interests of Scheduled Castes, Scheduled Tribes and Backward Classes by appropriate legal, executive and societal efforts and by large scale education and empowerment which they failed to deliver and showered step-motherly treatment towards Dalits and Adivasis.

In 2004, 2009 and 2014 also the party's manifesto at least had a clause regarding the fair treatment and empowerment of Dalits, Adivasis and Backward Classes which was again a false promise that was not executed.

But in 2019, the BJP and Narendra Modi's manifesto does not have even a single sentence that is mentioned regarding social justice and protecting Dalits and Adivasi rights while there is a sharp rise in atrocities towards Dalits and Adivasis in the country.

The only thing that the party promises is to empower the economically weaker classes in "ensuring justice to all" in page 33 of the manifesto which clearly shuns the interests of Dalits, Adivasis and Backward Classes providing more scope to the developed classes in the country which is a regressive ideology.

A lot of horrific incidents took place in the Modi-led government during the last five years. According to NCRB data, five BJP-ruled States have recorded the highest crime rates against Dalits.

While all such incidents tend to happen even while you are reading this, the BJP has nothing to say about protecting the oppressed and clearly confessing that the party is not concerned in addressing the Dalit issues and caste oppression.

If this continues to happen, the citizens of India belonging to Dalits and Adivasis will ultimately lose faith in the Constitution and may feel alienated in their own country where their rights are not protected and self-respect ruined which will probably bring the country into a state of turbulence and the BJP will have to pay a very huge price for failing to establish democracy and its paralysed thinking.