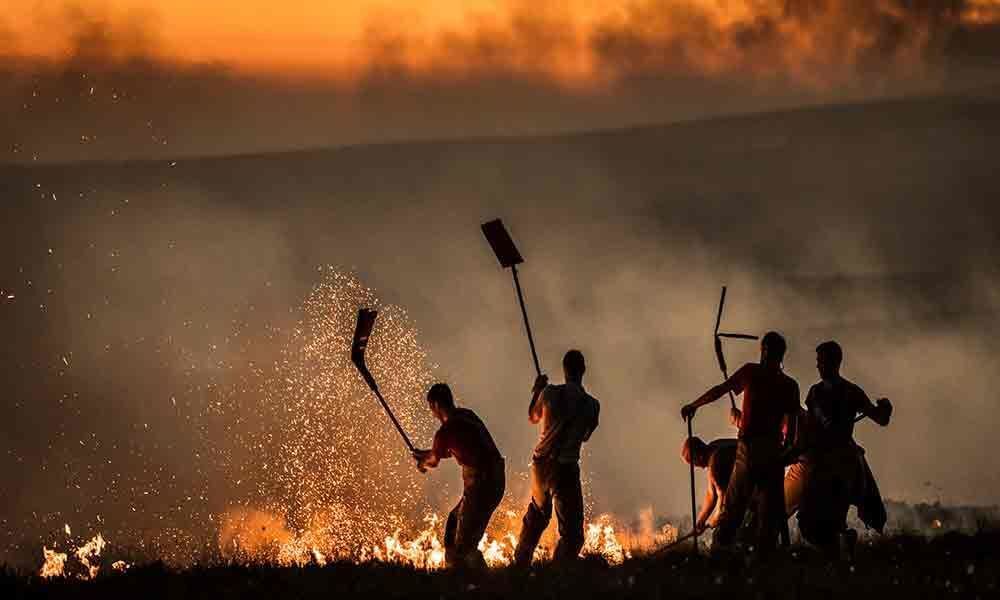 Climate change is a complex matter involving many issues of scientific, economic and socio-political origin, apart from embracing moral and ethical...

Climate change is a complex matter involving many issues of scientific, economic and socio-political origin, apart from embracing moral and ethical dimensions. No doubt, it is a global problem, but it is felt on local scales. It is a thing that will be around for decades and centuries to come.

Even if the entire world stopped emitting all greenhouse gases today, global warming and climate change will continue to affect future generations. In this way, humanity is "committed" to undertaking urgent and purposeful measures to mitigate the impact of the phenomenon.

Such measures will broadly fall into two categories, namely, "mitigation" and "adaptation". Mitigation involves reducing the greenhouse gas emissions either by reduction of the sources (like burning of fossil fuels for electricity, heat or transport) or enhancing the "sinks "that accumulate and store these gases (such as oceans, forests and soil).

Adaptation involves adjusting to actual and expected future climatic conditions, the goal being to reduce vulnerability to harmful effects like sea – level encroachment, extreme weather events or food insecurity. It also means taking full advantage of opportunities such as longer growing seasons or increased yield of crops in some regions.

The Climate Change Performance Index (CCPI) prepared by the Germanwatch and the New Climate Institute published together with the Climate Action Network ranks 56 countries and the EU, together responsible for about 90% of global GHG emissions.

Since it evaluates the extent to which countries are taking adequate action with regard to emissions, renewables and energy use, it becomes an important tool in the effort to gain a clear understanding of national and international climate policy.

A look at the CCPI 2019 shows that not enough or many countries have proved to possess the requisite political will to take firm steps. The devil, they say, lies in the detail. It is the small things of day-to-day life, such as using plastic bottles or carry bags, instead of glass or jute, which need to be discontinued. Also, being unmindful of the long-term impact of careless practices, such as leaving a light, or a fan or a water tap running while leaving a room or letting the car engine idle needlessly at a junction, is a mindset that needs to be discarded.

Improvements in hydro – meteorological systems for weather forecasting and the installation of flood warning systems can help people move out of harm's way before a weather – related disasters strike.

Investments in R&D for development of drought – resistant crops can help reduce some of the negative impacts.

Efficient use of ground water resources will need to be incentivised. Otherwise their depletion will, in response to increasing demand from a growing population reach alarming levels. More affluent lifestyles and the expansion in the services sector and industry will also contribute to the gravity of the problem. Water management is an important issue, especially in urban design, on account of the growing concern about water scarcity.

As a result, rainwater harvesting systems have received notable attention in recent times, as an alternative water conservation measures. Precisely that is why, following a direction, from the National Green Tribunal, the Delhi government has recently come down heavily on all illegal bore-wells, sealing them off. Departments of Central and State governments, in dealing with urban development, need to promote water harvesting on a massive scale by a carrot and stick approach.

One well-known and disturbing fallout of climate change is the increase in the intensity and frequency of natural disasters. And therefore, while all that can and needs to be done, is done by way of preparation for such repercussions. It is necessary for governments to undertake measures to mitigate their impact, and to increase awareness of such measures in the public mind. People in general also should be educated about the steps they need to take to minimise the suffering on account of the occurrence of natural disasters.

A properly designed land use system is an important feature of the measures that go to make a disaster resilient habitation. Building codes will also need to be strictly enforced and urban planning needs to be informed by imperatives relating to preparations for climate – related disasters.

As far as agriculture is concerned, crop diversification, and improved the soil management practices, together with the development of drought–resistant crops are areas that require careful attention.

All projects involving construction works need to be planned, taking into account climatic risks and changing innovative technologies. Although measures are afoot on research for efficiency - optimisation and for increasing awareness in this regard, much more will have to be done.

Health systems need to be strengthened in identified hotspots or hospitals especially in the area of disposal of waste. Remember, as a tree matures, it can consume 48 pounds of carbon dioxide per year (among other greenhouse gases like ozone) and releases enough oxygen for you to breathe for two years! So massive tree plantation is a step in the right direction.

Removing carbon dioxide from the atmosphere and releasing oxygen instead also helps limit global warming, providing for a cleaner, healthier climate. So, by planting trees, you can help clean the air and fight Climate Change!

People in general also need to be sensitised about the harm that can be done to water bodies by dumping all sorts of junk into them, especially in the name of religious rituals. Populist measures detrimental to water management need to be avoided. These include 24x7 or free supply of power. In fact, the farmers themselves will readily admit that they would rather have continuous and assured power supply of a fixed voltage rather than such sops.

While putting techno-legal regimes in place will undoubtedly have its long-term impact, what really needs to be done is to mount an awareness campaign that inculcates, in the minds of the general public, from child to senior citizen, a sense of responsibility that carries with it a caring attitude towards the environment.

There could be several ways of ensuring that such a thing happens including parental guidance, the inclusion of such concerns in the curricula of educational institutions, and abandoning the "government alone" approach and adopting an inclusive paradigm that takes in the importance of the role of civil society organisations, non-government organisations etc.

Climate change is no more a mere environmental concern but has now become a major governance issue as well. At the global level, it must firstly be accepted that the rich world must reduce emissions drastically, and secondly, that the poor and developing countries need to grow and prosper. The challenge is to find low–carbon growth strategies for emerging countries that do not compromise their right to develop.

Clearly, in both the figurative and literal sense, we are riding a tiger. It is no longer a viable option, to treat climate change as just another of those nuisances that activist groups indulge in, in the hope that it will go away if simply ignored.

All evidence available with the governments of countries around the world, the civil society organisations, international agencies and scientific and technical bodies, clearly indicates that here is a phenomenon that represents a danger that is immediate and present. A threat which, if not taken by its horns and dealt with firmly and effectively, can lead to nothing short of the extinction of the human race.

The international community should be commended for having recognised the gravity of the threat posed by the phenomenon of climate change, even though it took its time to do so. As the proverb in Hindi goes "der aaya, durust aaya".