India, heading for a hung Parliament 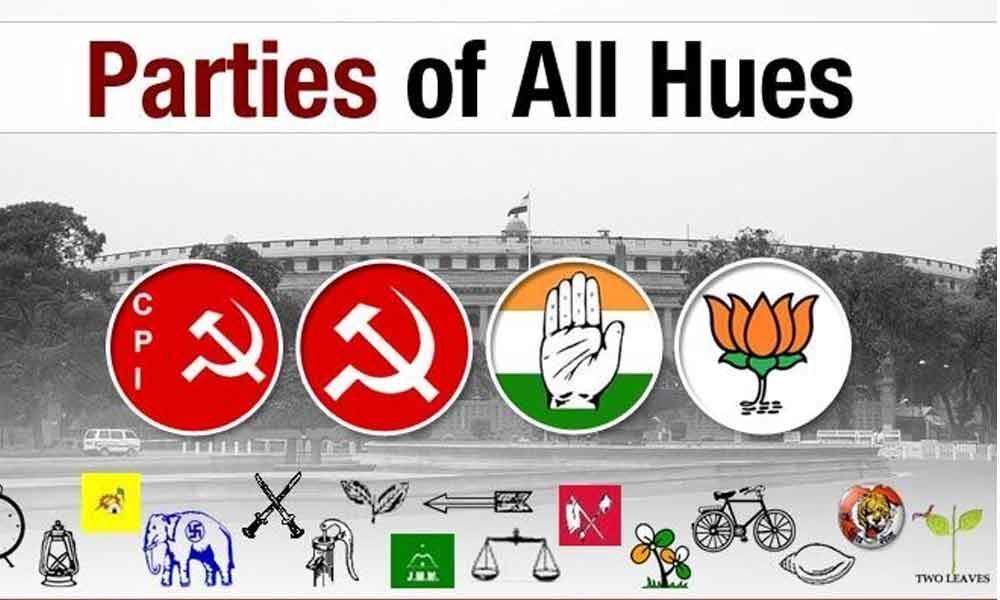 The stage is set for the fourth phase of Lok Sabha polls scheduled to be held on April 29 where 71 seats spread across nine States, mostly in the Hindi heartland, will be up for grabs, of which the ruling BJP will have to defend 45 seats.

The stage is set for the fourth phase of Lok Sabha polls scheduled to be held on April 29 where 71 seats spread across nine States, mostly in the Hindi heartland, will be up for grabs, of which the ruling BJP will have to defend 45 seats.

The 2019 Lok Sabha elections are witnessing a unique phenomenon where it is becoming absolutely difficult to gauge the mood of the people. Ask anyone in the Hindi belt who he or she is angry with, one may not get a clear reply. The fight is between two main characters, Prime Minister Narendra Modi and Rahul Gandhi.

If the campaign that has been going on till now is any indication, Modi and his team of BJP leaders have realised that hot winds continue to blow across the Hindi belt and the sailing is not so smooth.

Though Modi happens to be the central character and campaigner, his focus is not on his score card of five years but on the Opposition whom he has been trying to dub as anti-nationals and pro-Pakistanis.

Modi, unlike his predecessors, is asking for votes in the name of soldiers who lost their lives in the Pulwama attack. He is attacking the Opposition saying that while his government attacked terror camp in Pakistan, the Opposition was feeling the pain perhaps because their vote bank is in Pakistan.

The Congress, which initially appeared to be on a weak wicket about six months ago, has surprisingly surged ahead. The rift which got intensified between Modi and Andhra Pradesh Chief Minister N Chandrababu Naidu helped in bringing a dramatic change in the political scenario at national level.

The sudden love found by Naidu for Rahul ignited the process of all those who were seething with anger against Modi to unite. Unlike in the past, this time the Opposition did not form an alliance.

Keeping in view the tactics of the BJP, they decided to fight against the saffron party in their respective States and felt that the PM candidate can be selected after the elections and conveniently ignored the questions of the BJP as to who their PM candidate was. The BJP failed to provoke them on this issue.

The main job of putting Modi in a tight corner in the Hindi belt is apparently left to Rahul Gandhi who appears to have successfully carried the issue of corruption, on which Modi claims a clean record, to the people.

Rahul has been saying that Modi is scared of debate on corruption. His attack has been on Rafale and Anil Ambani. The government failed to come up with convincing reply on this issue.

In addition, the Congress has also offered many other sops like direct cash transfer to the poor, revoke sedition law and is trying to deflect the national security plank of the BJP by talking about corruption in States like Chhattisgarh and Maharashtra.

On the other hand, in States, the regional parties have ensured that the anti-Modi campaign was launched alleging that the promise of 'Sab ka Saath Sab ka Vikas' remained a mere slogan and that the Modi government has been harassing all those who opposed him.

The sequence of events that preceded the polls in States like Andhra Pradesh, Karnataka, Delhi and West Bengal did send a clear message to the people that Modi-led BJP does not want to allow a level playing ground and for that it would adopt any kind of tactics.

The worst affected of course was Andhra Pradesh. What also did not go well with the people is the way Modi launched a blistering attack on Mamata in West Bengal and after the elections, he tried to project that Mamata is close to him and sends him kurtas and sweets.

The way Naidu succeeded in exposing the misdeeds of the BJP government and the way the agencies like the IT, ED and even the EC were made to dance to the tunes of the Centre also exposed the Centre's attitude of hitting below the belt if you can't face the opponents in straight fight.

This is one election where even media has not been as active and as free as it used to be. The national media had failed to play its role whatever the reason be.

After completion of polling in 303 constituencies, the battle lines are now drawn for 71 seats and of these seats going to polls in the coming phase, 17 are in Maharashtra, 13 each in Uttar Pradesh and Rajasthan, eight in West Bengal, six in Madhya Pradesh, six in Odisha, three in Jharkhand and five in Bihar.

In the 2014 elections, the BJP had won 45 of these 71 seats - all the 13 in Rajasthan, 12 of 13 in Uttar Pradesh, five of six in Madhya Pradesh, three of five in Bihar, all three in Jharkhand, eight of 17 in Maharashtra and one of eight in West Bengal. In Bihar, political equations have changed. JD(U) which was opposed to BJP in 2014 is now its ally.

In Jharkhand, the BJP faces the combined might of Congress, JMM, RJD and Prajatantrik which are out to ensure that the ruling party does not repeat its 2014 performance when the NDA won 12 of 14 seats. In Madhya Pradesh, Kamal Nath who got elected as Chief Minister five months ago has taken it as a prestige issue.

The Congress, which came to power, wants to retain the trend. The contest here would certainly be keen. The BJP fielded Pragya Thakur from Bhopal. The accused in Malegaon blast case has made some very controversial statements against the Mumbai police officer Hemanth Karkare who lost his life in terrorist attack and seems to have lost some advantage.

Though she apologised later and participated in dance with women of Sindhi community, the fight is going to be a tough one. One advantage she has is that she is pitted against former Chief Minister Digvijay Singh who is not very popular among voters.

In Maharashtra, the fourth phase will see the Congress making all out efforts to reclaim its base in Mumbai. It remains to be seen to what extent Milind Deora, actress Urmila Matondkar, Priya Dutt etc will be able to make their mark.

An Interesting development in Mumbai according to news reports was Maharashtra Navnirman Sena President Raj Thackeray claiming that there was "no wave now like 2014" for Modi, and the BJP and its leaders are now wondering what to do.

"Modi has said nothing about the promises he made in 2014.

Instead, he grabs any issue to seek votes. Now, he's asking for votes in the name of the Easter Sunday terror strikes in Sri Lanka," Thackeray said at a rally in south Mumbai's Kalachowky area.

Alleging that Modi has "only said lies and made fake propaganda" in the past five years, Thackeray showed a picture of the Prime Minister posing with a family ostensibly brought above the poverty line in a government advertisement.

To prove his point, Thackeray called on stage the entire family - amidst thunderous applause - and said their photo on a social media site was "simply picked up" and the Prime Minister's photo pasted alongside to produce the fake advertisement for the government campaign. This certainly has the potential to damage the prospects of BJP.

In Odisha, the BJP feels that it will be able to make inroads into the bastion of Biju Janata Dal. Interesting fight is also on the cards in Rajasthan where Congress came to power recently.

In UP, most of the seats in fourth phase are in Bundelkhand region where this time BJP faces strong challenge from BSP-SP combination. The fact is across the country the farmers are angry with the BJP. In West Bengal, the BJP is making an aggressive push against Trinamool Congress, which has been dominating the political scene since 2011.

An estimated 1.5 crore young voters in the age group of 18-19 years would vote for the first time across the seven phases.

In the last general elections in 2014, more than 55 crore Indians had voted (66.3 per cent) with the BJP emerging victorious with little over 30 per cent votes, giving a five-year mandate to a government led by Prime Minister Narendra Modi.

But the young voters who had pinned high hopes on Modi and believed his words of start-ups, 'Make in India' etc are now a disappointed lot. How they behave remains to be seen. In fact, this section has the potential to make or mar the fortunes of the saffron party.

The fact remains that the sailing for BJP is not smooth and if the general mood is to be believed we will be having a hung Parliament.