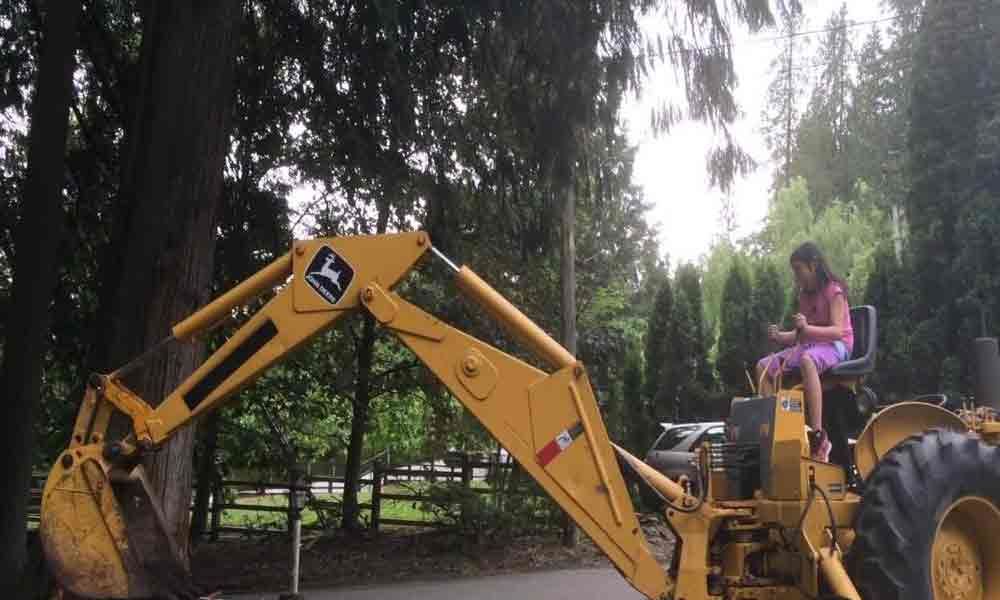 Some four years back in a scientific meet (11th Metropolis World Congress at Hyderabad(2014) we described proclaine as enemy number one of...

Some four years back in a scientific meet (11th Metropolis World Congress at Hyderabad(2014) we described proclaine as enemy number one of biodiversity, which are being used in real estate construction, to destroy trees of 300 years to widen roads and demolishing to hillocks and boulders of heritage significance. Today we are witnessing unprecedented water scarcity in the entire Madhapur-Gacchibowli stretch. This area was one time is dotted with small hills and boulders.

Much more worse is witnessed in villages especially in Andhra Pradesh due to these proclainers. On several names, Neeru-chettu, water-user's association (WUA) it looks the Govt. delegated authority to villagers to desilt lakes and waste water drains to facilitate water flow.

This work of using proclainers, is entrusted to some type of committees what are vaguely called "village committees" which composed of young leaders/youth mostly husbands of women's sarpanches, MPTC members. The modus operandi is, these village members get signature of 20 to 30 farmers and get it approved by WUA's and irrigation department.

The Irrigation Dept gives its approval and send its own proclainers and JCBS to the village committee. Proclainers can be described as monster to demolish buildings, boundaries and trees in a matter of minutes. The village roads are weak, made of earth and narrow, while reaching village the roads are being destroyed.

First let me describe this desilting business of village tanks, whose catchment area is at best 1 KM. The village committee members and the illiterate driver are the sole judges of what to do with this "weapon" with no representative Govt. officer present at the work site.

They desilt the tank up 20 feet deep. The soil that formed bottom after desilting became porous, the rain water permeates deep into soil. Even if water is collected due to rains, the water is not enough to flow by gravity to fields. It is an unscientific act.

The most important part is this scheme is, to dispose the huge body of desilted soil. Farmers are advised to sow it as a fertiliser, an another unscientific advice. The soil is not black cotton soil, mere sand, with no nutritional properties.

Yet another method devised by these of village youth. In villages, trenches will be found adjacent to old house. They just fill the trenches with the desilted soil, forcibly in the presence of the owner. If owner has migrated to some other place it is all the more better.

Eventually they could claim it as own or if owner shows up they pressurise them to give land for unknown charitable purpose. As the tractor-trolley makes several to and fro trips, eventually the whole village is engulfed with dust which presents class one health hazard.

In West Godavari district some villagers migrated to their relative's house to escape the "manmade" dust but they do not complain, afraid of life and security of property. To describe in the words of V. S Naipaul (Nobel Prize Winner for literature, Indian born in Trinidad) in his book "An area of Darkness" described a village in 1962 as "The dust in the village was thick and constant. It obliterated trees and fields and villages. I breathed dust.

There was dust in my hair dust down my shirt, dust nauseatingly on my finger nails" That was natural scenario of 1962, and now it was recreated by using proclainers. Yet next another source of making money is deepening drain water streams (called drains) which ultimately merges into Godavari in coastal villages of West Godavari.

The village committee get sanction to dredge drains in their village limits. After dredging the drain, partly, the whole length of the dredged drain become a trough or trench. Waste water or rain water never flows. On the other hand if one desilts up to the end, where it merges into big drain that ultimately merges into Godavari, there will be reverse flow of salt water of Godavari (it is sea water).

It enters into the fields all through the year, make the land saline. Both ways it is unscientific. There are other social problems of law and order. The proclainer enters private paddy fields make big trenches in the moist fields. It cuts every tree, the coconut trees, that will be found on the bunds of drains, which comes in their way to reach the drain. Cutting the trees, is an offence, private or on govt land.

To cut the tree on Govt. land is all the more big offence since the permission of A.P. Water and land and tree act 2002 (WALTA) is a must. The owner of the land will be silenced by several methods. This proclaine is also used to settle scores with others, it smashes boundaries of private house sites.

Villages are helpless due to the fear of vengeance and repercussion. There is no security to life and property of villagers. The villagers will not give, witness even. The mind of the villagers cannot be fathomed. The only weapon is vote and that exercised recently. The surprise result of General Elections of April 2019 is too well known in Andhra Pradesh.

There are several remedial measures are insight. First: Geotag all proclaines, public or private. Second: Establish a Govt. control room at District Headquarters. Third: prior permission of control room is needed before it is removed from garage. Fourth: Authorise petrol bank to sell diesel that is only necessary for the purpose. Fifth: Ban completely proclainers into the village.

Sixth: All correspondence with control room is by SMS to be recorded. Seventh: This illegal sand business would have been controlled with these measures, Eighth: Do not level the control of proclainers to the illiterate driver and this village youth. Irrigation department officials must be present during the whole operation.

Silver lining: After this article is written, just now, we saw a news item "JAGAN'S Govt. to abolish WUAs. (The Hans India, Monday 17th June 2019, page, 12). It is indeed a right step to free the villages from the clutches of these village committee members and also to free villagers from the attack of proclainers. Let the new Govt. of A.P. act earnestly to stop the menace of Proclaines in villages.