Repeal of Article 370: A shrewd gamble or a game changer? 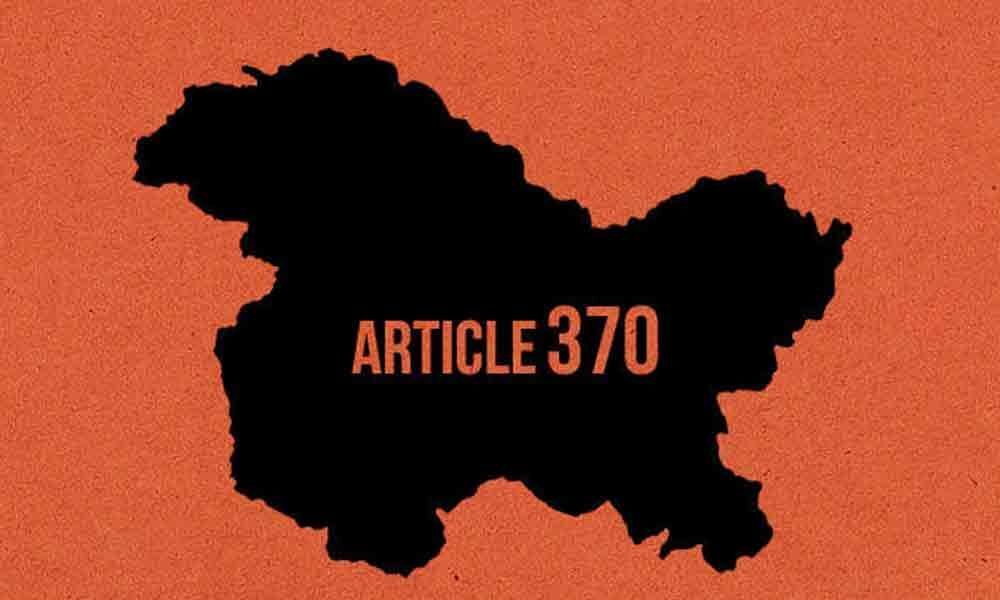 Repeal of Article 370: A shrewd gamble or a game changer?
Highlights

Will the decision to abrogate Article 370 and 35A by the Bharatiya Janata Party (BJP)-led National Democratic Alliance (NDA) government prove a...

Will the decision to abrogate Article 370 and 35A by the Bharatiya Janata Party (BJP)-led National Democratic Alliance (NDA) government prove a 'shrewd gamble' or 'game changer' in Indian politics? Or, was this decision taken with an eye on upcoming State assembly elections in a couple of States?

Can it be construed as 'muscular' policy of Narendra Modi headed in a bid to create new India? Or, diverting tactics of the government which proved disastrous as being accused by some intellectuals ignoring more burning issues like growing unemployment as well as dwindling economy?

These and many such questions continue to haunt this government and their supporters, who claim as 'historic' the scrapping of these Articles, which ruling clique continue to claim as 'stumbling block' for real integration of J&K as part of Indian States. What stunned the nation's most is bifurcating the Ladakh region with the rest of Jammu and Kashmir.

Ever since the BJP bounced back to power the second time with massive mandate, the BJP looks more than determined to fulfil all its elections promises. It already succeeded though it does not have majority in Upper House by successfully manoeuvring the most contentious laws like Triple Talaq followed by the RTI and now scrapping of Art 370 and 35 A.

Modi and his party's intentions were very clear when it chose to make Amit Shah as the Home Minister. In fact, he was hitherto only confined to building party and expanding its tentacles to other States. Modi had also taken care to strengthen the External Affairs Ministry by picking up former seasoned bureaucrat Jaishankar, who had long stint in the same job.

External Affairs is bound to strengthen the Prime Minister's hands in achieving his lofty dreams. Together they manoeuvred to push more than 35 Bills in the short session of Parliament, which is a record of sorts in the annals of India's Parliament.

However, of all, the passage of the most controversial Triple Talaq Bill, which was rejected earlier by Rajya Sabha with the help of regional parties like the BJD, the YSRCP and the TRS, indeed proved icing on the cake. This has not only emboldened them, also made them redraw future strategies to achieve the larger game plan in Kashmir.

The sudden movement of large troops and cutting short of Amarnath Yatra, besides 'advisory' issued to the foreign tourists to leave Kashmir, explains how meticulous the government's planning was.

Added to that was the Centre's secrecy and the stoic silence maintained by the J&K Governor over reinforcement of troops and creating unprecedented situation. This, notwithstanding the former Chief Ministers - Omar Abdullah and Mehbooba Mufti - expressing their apprehensions. Thus, the Modi government has succeeded in keeping the entire nation guessing what "big-is-in the-offing'.

Having set the stage and true to the predictions of some, the introduction of the Jammu and Kashmir Reorganisation Bill and its passage which happened in a jiffy - one stroke - on Monday came as 'bolt from the blue' for the entire nation as well as world.

The climax was the Congress chief whip in Rajya Sabha Buvaneshwar Kalitha's decision to resign opposing the party's line on J&K. He quit the party saying that he would not go against the mood and emotion of the nation. That the Congress is a divided house has also been established beyond doubt when another leader Deora announced his support to the government moved Bill.

The J7K Reorganisation Bill not only abrogates the Article 370 and 35A but also effectively ceases the special status to J&K. It will trifurcate the State and create two seperate Union Territories - Jammu and Kashmir with legislature and another one - Ladakh without a legislature.

Justifying the Bill, Amit Shah termed the Article 370 of the Constitution as the root cause of terrorism and impediment to the development in Jammu and Kashmir particularly the Valley. He said full statehood status will be restored to Jammu and Kashmir at an appropriate time when normalcy returns.

There were severe apprehensions and allegations that the properties in Kashmir were owned by three select families - Abdullahs, Muftis and Lones - and militant mafia impeding the developmental process.

With no basic facilities like hospitals, educational sectors with quality services and high unemployment, the local youth were lured into militancy. The main avocation is exports of fruits and handicrafts which fetched Rs 7,000 to Rs 8,000 crore annually. The situation was exploited by Pakistan in fuelling insurgency on high scale creating a war like situation perennially.

Though the abrogation of the Article 370 and 35A was on the BJP's agenda, Modi I.0 did not have the courage to make an issue given the complicated history of Kashmir and sensitivity surrounding the matter. The BJP alliance with Mehbooba Mufti's PDP which could not complete the five-year term in the State has helped the party in examining the strengths and weaknesses of J & K issue thoroughly.

Emboldened with Balakot strikes after the Pulwana Pak-aided terrorist attacks, the BJP's gamble of projecting muscular nationalism has paid off in the Parliament elections. With the stunning majority in the Lok Sabha and manoeuvring tactics in Rajya Sabha splitting the UPA, the party has realised that "now or never" approach was imperative to take contentious issue like abrogation of Article 370 to a logical conclusion.

While the past developments showed that the Union territories like Goa and Delhi were converted into two States legitimately granting democratic rights to the people of the area, this is the first time in the history of India that a full-fledged State which followed "democratic path" has been split into Union Territories.

The Opposition said it was retrograde step and would send wrong signals. Will the people of new Jammu and Kashmir Union Territories with combined Muslim population of nearly 69 per cent and 29 per cent approve the BJP's bold move? Similarly, will the people of Ladakh where Buddhists and Hindus form majority be satisfied with their long-pending demand of making it a Union Territory?

Against this backdrop, the moot question is whether the unprecedented decision will have what sort of bearing on the nation. Some quarters describe Modi's move in the prevailing circumstances when the economy is slowing down as a diversionary tactics.

But the BJP is confident that the decision to split Jammu and Kashmir is justified as it removes the stumbling block in national integration once for all. The decision would prove a strong tool apart from major development measure to empower the J&K youth, who have been deprived of fruits of development for the past 70 years.

Apparently, even India Inc expressed its joy over the government's decision, though the Opposition continue to accuse that the move will benefit the corporate sector close to the ruling clique.