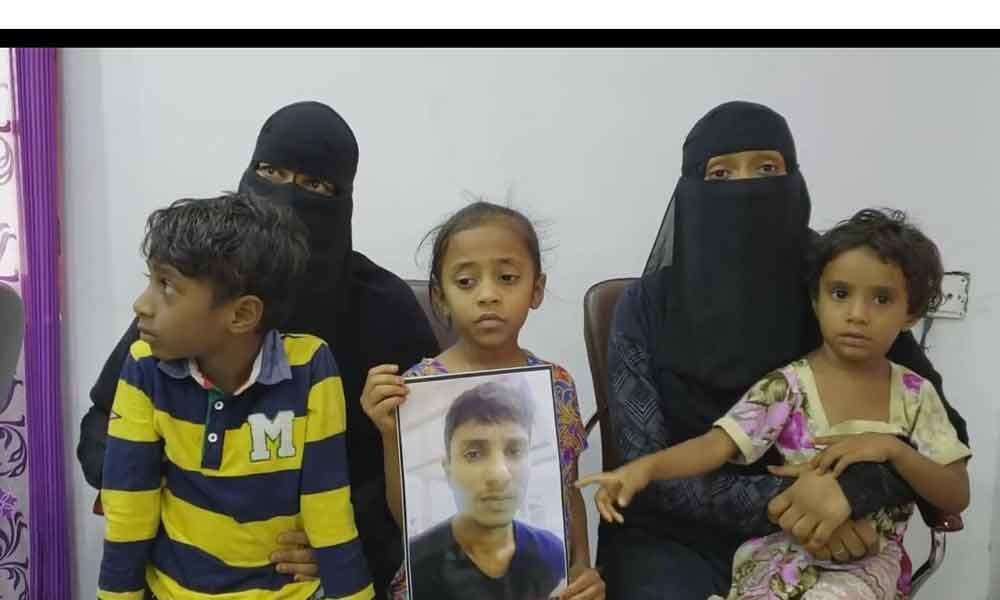 The family of a man from Old City has requested External Affairs Minister Sushma Swaraj to intervene in the matter of a man languishing in Saudi Arabian jail for the past 7 months following a ‘false case’ foisted against him by his Kafeel (sponsor).

Chanchalguda : The family of a man from Old City has requested External Affairs Minister Sushma Swaraj to intervene in the matter of a man languishing in Saudi Arabian jail for the past 7 months following a 'false case' foisted against him by his Kafeel (sponsor). His wife and sister approached MBT spokesman Amjedullah Khan to guide them to seek the help of External Affairs Ministry in this endeavour.

While appealing to Sushma Swaraj in a recorded video, Salma Begum, the wife of Syed Asif, a resident of Talab Katta, requested her to intervene in this matter as she strongly believed that her husband was not involved in any kind of misdoing.

According to her, Syed Asif went to Saudi Arabia in January 2016 on an electrician visa but was asked to work as a driver-cum-helper carrying leather goods from Riyadh-Jeddah by his Kafeel named Abu Khaled Hussain. He was promised food and accommodation with a salary of 1800 Saudi Riyals by a travel agent but was being paid only 1200 SR without food and accommodation.

She alleged that for the last 5 months he was not being paid any salary and was being beaten up time and again, due to which he was on the verge of begging on roads and his Kafeel was not allowing him to go back India. "He was not even allowed to visit India by his Kafeel even after his mother's demise," she said.

Salma Begum further said that as he was not having any money for food, he started working with some other Kafeel and also approached the Indian Embassy in Riyadh for help. He was issued an emergency passport to travel back to India.

"But in the meantime, his previous Kafeel Abu Khaled filed a false case against him that he had run away with 65,000 SR. He was arrested from Jeddah Airport on September 4, 2018, and sent to Shamesi Jail and then transferred to Malad Jail," she informed.

She appealed to Sushma Swaraj and the Indian Embassy in Riyadh on November 18, 2018 for getting her husband released as she was facing a lot of difficulties in taking care of three minor children, but to no avail.