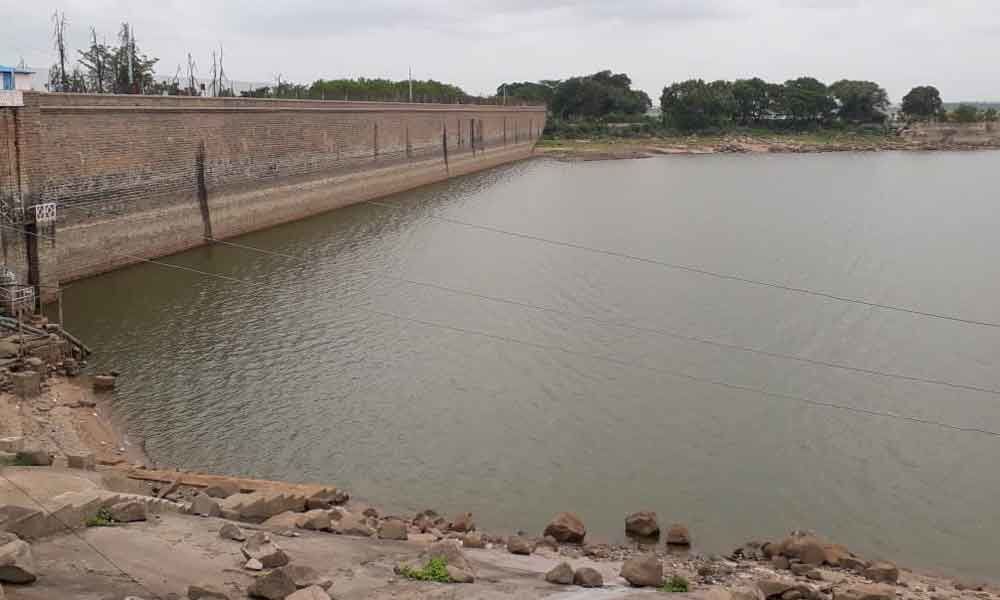 The Osman Sagar, a tributary of Musi river, appears to be caught in a grim situation than the Himayat Sagar comparatively.

Rajendranagar: The Osman Sagar, a tributary of Musi river, appears to be caught in a grim situation than the Himayat Sagar comparatively. Owing to the lack of water flow from upstream areas, the present water level in Osman Sagar stood down at the bottom with 1764.20 feet (0.333 tmcft) i.e., just 7.2 feet above the lowest sluice level which is 1,757 feet.

According official records, as against the present water level of 1,764.20 feet, the reservoir received 1777.50 1.612 tmcft water in the same period last year. This accounts for a deficit of almost 13.3 feet this year.

The water pumped through the Osman Sagar is diverted to Asifnagar filter from where it is used to supply to different areas after getting treatment. With only 7.2 feet of water the reservoir posing a bleak picture of scarcity in the days to come if the situation continue to persist. As the permanent storage capacity is 1790 feet, the water body is still lagging behind 26 feet as it stood at 1,764.20 feet down to bottom.

It is said that the rainfall has been substantially very low over the upstream areas. If there had been adequate downpour in the upstream areas, there would have been some assertive impact on the present level in the reservoir.

Osman Sagar was constructed during the Nizam's era in the year 1920 to provide for an additional source of drinking water for the people of Hyderabad and to protect the city from floods after the great Musi flood wreck havoc in 1908. Since the magnificent reservoir was built during the reign of last Nizam of Hyderabad state Mir Osman Ali Khan, the reservoir was named after him.

The total composite length of the dam is 2,900 feet, and the total length of a dam is 6,300 feet with 1,790 sqft area of water spread. The maximum depth of the water above bed level and below FTL is 104 feet. Its maximum water level (MWL) is over 1,810 feet and the reservoir carries total 15 flood gates to flush out the flood water in case the situation goes alarming after the water body reaches its maximum capacity.

At present, the road over the actual dam was completely closed to the public due to various reasons and only the partial route till the park area is open from where the visitors will be able to have a glimpse of the water body besides enjoying the lush greenery.