Respite for Yousufguda people only after polls 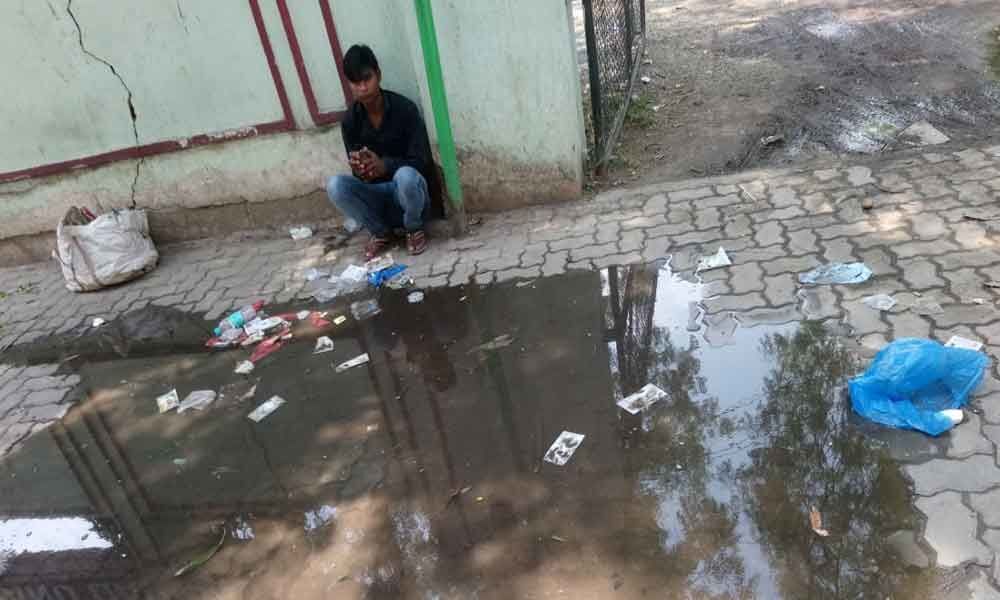 x
Respite for Yousufguda people only after polls
Highlights

Local residents here are angry with MLA Maganti Gopinath for ignoring their plight due to overflowing od drains, abundant heaps of garbage everywhere, leaky pipelines and open places turning into dump yards. They demand that the Jubilee Hills MLA pay immediate attention to civic problems galore in his constituency, especially at Rahamath Nagar in Yousufguda.

Yosufguda: Local residents here are angry with MLA Maganti Gopinath for ignoring their plight due to overflowing od drains, abundant heaps of garbage everywhere, leaky pipelines and open places turning into dump yards. They demand that the Jubilee Hills MLA pay immediate attention to civic problems galore in his constituency, especially at Rahamath Nagar in Yousufguda.

"Overflowing drain is the major issue which we complain every time. This complaint has been made umpteen times since 2004, but to no avail. We have visited corporators, complained to GHMC officials and also submitted a memorandum to the respected MLA Maganti Gopinath. Though he was patient to hear our issues in detail, no corrective action has been initiative to redress our grievances. We are highly disappointed with people's representatives and officials concerned for the continued negligence," rues P Sathya Gnanam, a retired employee of HCL.

"Drain overflow is making our lives miserable. We can't come out and enjoy fresh air in the evenings. We couldn't go for a walk. We couldn't even open our doors. With the stench everywhere assaulting our noses, we could not have a proper breathing. We raises these issues with our corporator, but even then no one seems concerned to rectify the situation. All of them including Maganti Gopinath visited this lane and inspected the state of drains and promised to do something for us. But, nothing has changed," criticised Veera Vani, a resident of Yousufguda.

"We have been running a school for many years and there have been numerous complaints over drainage overflow. We have around 400 students on our campus and its our responsibility to maintain the school surroundings clean and tidy. We are very much concerned over children's health and ragging complaints as well. But, there is no response from any side. We earnestly request MLA Maganti Gopinath to kindly address this issue earnestly as the utmost priority and fix the issue of overflowing drains on the school premises," urges Sathyanarayana, MMCC Talent High School correspondent.

"MLA Maganti Gopinath has helped much my family. It's really a great support from MLA. Because of him we are all existing, but is quiet inexplicable why he is not responding on the civic issue in my locality. We have been facing this nagging issue since 2004 when the road construction taken up. It would be much appreciated if someone solves this issue as soon as possible. Maganti should do this for us. We voted in favor of him and he needs to do this," demands Bhagya Laxmi, a shopkeeper.

"We have submitted a memorandum to MLA Maganti Gopinath in the month of January during a felicitation ceremony in Yousufguda by taking to his notice the issues that plague the whole Rahamath Nagar area. We clearly flagged drainage overflow and sewage pipelines damage as the major problems in a representation to him. Sathya Gnanam, Venkatachary, Rajveer Singh Kalsa, Mohammed from Rahamath Nagar explained the issues in-depth to the MLA. Yet, he seems to be too busy to pay heed to our plight and come to our rescue. We urge through your newspaper Maganti Gopinath to recall the promises he made to us and solve our issues even now at least," said Veeru Bhai, a resident of Rahamath Nagar.

When The Hans India took up the pressing issues of denizens with the MLA, Gopinath said he was indeed aware of the issues and assured to act: "I have reviewed the issues, am there for the people of Jubilee Hills constituency till my last breath. I never received any representation from the Rahamath Nagar area. Currently, I can't do anything as per the Model Code of Conduct. On or after June 27, I will be available to people officially. If a representation from the public reaches me on these issues, I will to try to do something. Nothing can be done from my side till I receive a representation on these issues."

" pipelines in this area are too old. Due to the increase in the population in the area and lack of planning in laying pipelines and sewage paths CC roads were constructed. Before constructing the CC roads , there must be a change of sewage lines and that not happened in this area. Mostly , due to 12 ft depth nala covered with around 6ft of dump and dust under the grounds, hence there is a difficulty for the drain to flow through the small pipe grounds as there is no proper de-centric works were done too, where we need to be very rigorous, we failed by poor quality in the constructions. Thus, over flowing drains are seen in every lane of rahamathnagar.

Atleast now, the pipelines which are old , and which are minimal need to be replaced with the new drainage lines and must construct with a proper planning , the this issue will be solved" said Naveen Yadav , Contestant MLA, Jubilee Hills.