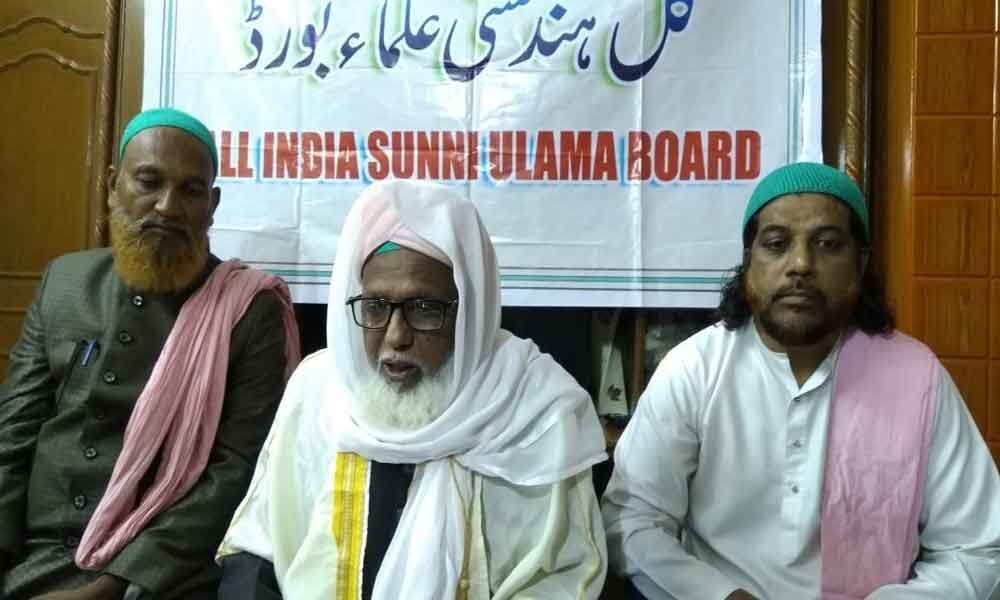 The All India Sunni Ulama Board (AISUB) appealed Muslims to vote for secular parties at the national level and defeat the communal forces to ensure protection of communal fabric of the nation. The Board appealed the community to vote the grand old secular party, the Congress to ensure fascists forces are kept at bay.

Dabeerpura: The All India Sunni Ulama Board (AISUB) appealed Muslims to vote for secular parties at the national level and defeat the communal forces to ensure protection of communal fabric of the nation. The Board appealed the community to vote the grand old secular party, the Congress to ensure fascists forces are kept at bay.

Speaking to The Hans India, the Board's president Syed Hamed Hussain Shuttari described the Parliamentary election as crucial as it would completely change the dynamics of the nation. "If a non-secular party like BJP comes to power, the situation would be terrible for the minorities. For up keeping of secular values where Minorities can live peacefully, everyone are requested to vote for the secular party of country, the Congress", he emphasized

Speaking about the TRS, Hamed Shuttari said that the TRS has its share of unfulfilled promises made to the community. The party chief KCR, he said, is very good at making promises and also good in not fulfilling them. KCR has promised to minorities for 12 per cent reservation and also promised to appoint 4 to 5 Ministers from community.

He also promised to save the Wakf property under Lanco hills and also promised to give judicial power to Wakf Board, which remains pending, even as crores of worth property is grabbed. The Board president also said that the TRS nor AIMIM, which claims to champion of Muslim cause has raised their voice for the Aler encounter, where five youth were killed. In another instance, in the Mecca Masjid bomb blast case all the accused were acquitted and there are no efforts from State government or its ally.

Speaking about this general election, Hamed Shuttari also said that KCR who claimed to have secular values and friend of Muslims failed to prove as none of the party ticket went to Muslim candidate.

Hamed Shuttari asked KCR as to why election ticket was not provided to any one from the community. "Is it that the community does not have educated personalities, like Doctors, engineers, lawyers, professors to do justice to the position. Many other Muslim leaders who are already in TRS were also not visible and none of them got the seat for election," he lamented.

"If we vote to TRS, the vote will directly go to BJP, as TRS is a secret ally of BJP. Modi is proving to be autocratic administrator and his want to realise what the Hitler achieved in Germany. By this AISUB appeals the Muslims to vote the secular party Congress in this election. The Congress is the only party which can fight against the BJP and Modi," he said.